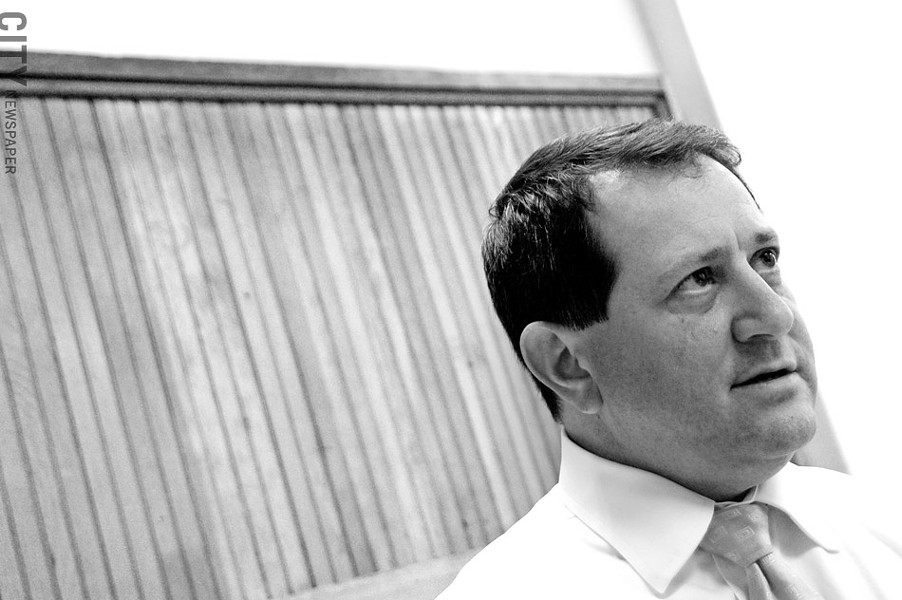 Morelle is not the only local elected official who has been skeptical of the plan; Mayor Tom Richards and County Legislature Democrats have been very critical of it. But Morelle's involvement is adding to tensions over the plan. The college is counting on state funding for the move, and Morelle has a position of influence within state government. As the Assembly's majority leader, he's second in rank only to Speaker Sheldon Silver.

And he's not just questioning the short- and long-term costs of MCC's plan. He's also urging SUNY and the governor's office to conduct independent analyses of MCC's proposal, a request that college officials say is unusual.

"I think it's a concern to everyone with regard to his continued raising questions, there's no doubt about that," says Kenneth Goode, president of the college's Board of Trustees.

MCC wants to buy several buildings on Kodak's State Street site and renovate them for use as the new campus. Earlier this month the County Legislature authorized the county, which owns all of MCC's property, to buy the Kodak complex for just under $3 million. The county is negotiating the final terms of that sale.

College officials expect the project to cost $72 million, half of which will be covered by the state. MCC officials have said that $30 million of the state funding is accounted for, via previous allocations, one of which would require a technical change for the college to receive it. That change would require the Assembly's approval.

Morelle, however, is skeptical of MCC's funding claims.

"The question I've asked is how much does it cost to do any of that?" Morelle says. "That's what I'd like to see an answer to before we decide to plunge into this thing."

He also says the college shouldn't have dismissed a new proposal by WinnCompanies that could save the county and college money. The company says it can renovate the Sibley building for $57 million.

The issues raised by Morelle echo the questions and concerns posed by Richards and Legislature Democrats. And like Richards and the Democrats, Morelle says that the Sibley building would provide a campus that's integrated into the heart of the city. The redevelopment of Midtown, along with a new bus station and RIT satellite campus opening up in the area, make the Sibley building a good option for an urban campus, he says.

Morelle says that, over the years, he's been involved with once-promising projects that haven't panned out: Frontier Field, the fast ferry, and the soccer stadium. Richards has made similar comparisons recently and he says he agrees with Morelle that the state should do its own analysis. Morelle says that the state should examine construction and operating costs of MCC's Kodak site proposal as compared to Winn's Sibley building proposal.

"If I've gotten to be more critical in my analysis and thinking, it's having been burned several times by well-meaning people who just didn't give us the right information," Morelle says.

But MCC officials say they are frustrated that the same questions –which they say they've repeatedly answered the best they can – keep coming up.

Goode says that college officials spent more than two years studying and analyzing potential campuses before deciding on the Kodak site. They looked at more than 18 potential locations, including the Sibley building, and hired outside experts and site selection consultants to evaluate them.

And as part of the selection process, MCC looked at the cost of operating the sites, including the utilities costs. The county and the college are still negotiating the utilities with Kodak, which will determine whether MCC operates the plant.

MCC spokesperson Cynthia Cooper says SUNY has assured the college administration and trustees that it supports the move to the Kodak site.

As for the Winn proposal, Goode says he was stunned when the developers introduced the proposal at a County Legislature committee meeting.

"We had bent over backwards to delay our decision to listen to them, which other proposals did not have that opportunity to do," Goode says. "So we think they've been treated more than fairly with regard to explaining to us what they had to offer."

On February 15, Kress released another open letter to push back against the continued questioning of the Kodak site.

One of the issues she directly addressed was the state funding. "To correct continued misinformation, $25 million in state funds is already in place for this project," she wrote.

In her letter, Kress also questioned why critics of the move are taking the Winn Companies' proposal seriously. Winn originally presented an $85 million plan two years ago; Kress questions what the developer sacrificed to cut $28 million out of its plan. (WinnCompanies have said that the price is lower because they used a different layout.)

Downtown Rochester is at a crucial point in its revitalization. New housing is being developed and several companies have moved their offices or headquarters to the city. And the county has worked with the city to advance some of that development, especially through tax-incentive programs.

But MCC's downtown campus proposal is on the verge of becoming a political issue, if it isn't one already.

If Morelle pushes back against funding for the new MCC campus, is there a risk of a new city-county rift forming? One never materialized after Renaissance Square fell apart, but a new fight over a county-led project in the city could lead to new frustration.

In October, the public got a glimpse what that dynamic might look like. At issue was a Monroe County Industrial Development Agency tax benefits package for WinnCompanies, which at the time was buying the Sibley building. Mayor Richards saw politics at play when the vote was delayed. But County Executive Maggie Brooks said the COMIDA board was just doing its due diligence on Winn's application. COMIDA eventually approved the benefits.

With city and county governments facing tight budgets, continued cooperation will be crucial. The two governments work together to provide some services to the community; for example, the county hires the city to run its 911 dispatch center. But over the years other commitments, such as county funding for downtown policing, have eroded. And Richards worries that if the Kodak site is more expensive to operate than the Sibley site, city residents will be harder hit by those costs because of the way the county funds MCC.