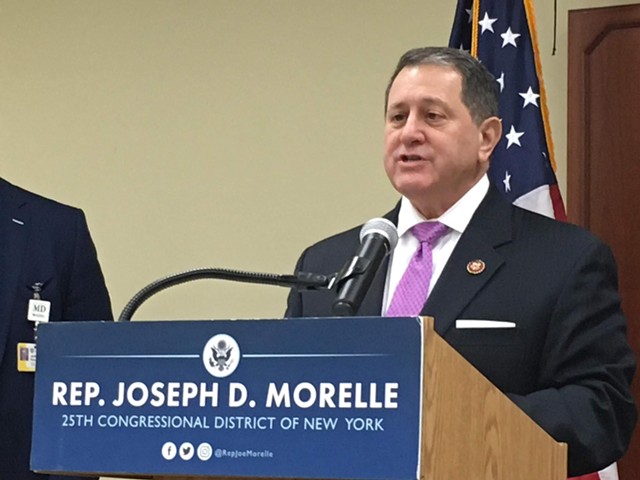 The Irondequoit Democrat co-authored the legislation, called the Innovation Centers Acceleration Act, with House  Rep. Terri Sewell of Alabama. The bill has support in the U.S. Senate, and is sponsored by Illinois Sen. Dick Durbin and Delaware Sen. Chris Coons.

The measure was also listed as a top priority for COVID-19 pandemic recovery by the New Democratic Coalition, a group of more than 100 lawmakers in the House of Representatives who are pushing for the bill to be included in President Joe Biden’s stimulus package.

If the bill passes, a national selection committee representing federal agencies and advised by labor unions, research institutions, and industry would oversee a competition among U.S. metropolitan areas for designation as one of the nine Innovation Centers.

Applicants would have to present a plan to direct state, local, and private sector money into advancing one or more "innovation-based sectors," according to a news release from Morelle. "The plan should incorporate existing technical advantages, local research institutions, and "industry core competencies." The plan would also have to "foster racial equity and inclusive growth, ensure affordable housing, and scale up education and workforce development."

Primary federal support for the program would come from the National Science Foundation, which would award grants of up to nearly $1 billion per year for each Innovation Center.

Massachusetts Institute of Technology economist Simon Johnson said Rochester is a perfect fit for this kind of investment. Johnson co-wrote the book "Jump-Starting America," which advocates for this kind of government spending. He said most innovation stems from an era when the federal government spent as much as 2 percent of the gross domestic product on research and development. In recent decades, he said that number has shrunk to about 0.65 percent.

“The fact of the matter is Rochester is No. 1 when it comes to places that could benefit from this kind of investment," Johnson said. "It would be good for your region and good for the country.”

When asked how this potential windfall would help the poorest Rochester residents and the city’s staggering poverty rates, Morelle said the measure comes with strings tied to “fostering racial equity.”

“Without this kind of investment, and without an eye to make sure it's inclusive growth, I don’t know that we’ll ever solve these problems, because at the end of it, it's the kind of economy that’s growing that gives opportunities for success,” said Morelle. “There are really two Rochesters in so many ways, but I think this is part of the solution, to bring people in and expand the economic pie and just make sure it works for everyone.”

Greater Rochester Chamber of Commerce President Bob Duffy agreed. He also said that diversity is something that chamber members are struggling with.

“We have a technology hub here, but I think we all would agree that the lack of men and women of color in technology here is a profound issue,” said Duffy. “Most of those businesses are members of ours, and I assure you that it is a huge challenge."

Duffy said it starts with education, in particular in the Rochester City School District. He recommended offering a broad spectrum of students a ladder into high-tech fields like optics and web development through classes and certifications.

“We have to look at some deep system changes here, and believe me, we’ve all been trying for years and years," said Duffy. “If the congressman is successful in bringing a billion dollars here a year, it has to have a huge racial equity component. It is time to do a deep dive into these systems and create a Rochester for the future.”