Morelle, an Irondequoit Democrat who's served in the Assembly since 1991, announced his candidacy this morning at the Plumbers and Pipefitters Local 13 meeting hall on Mt. Read Boulevard; Morelle said his father was a member of the union for 50 years.  But as much as the announcement was about Morelle's political future — Assembly elections are this year, and he won't be able to run for his seat — it was about paying homage to a beloved Democratic Party icon.

"We need a leader who will pick up the mantle of Louise Slaughter," Morelle said. 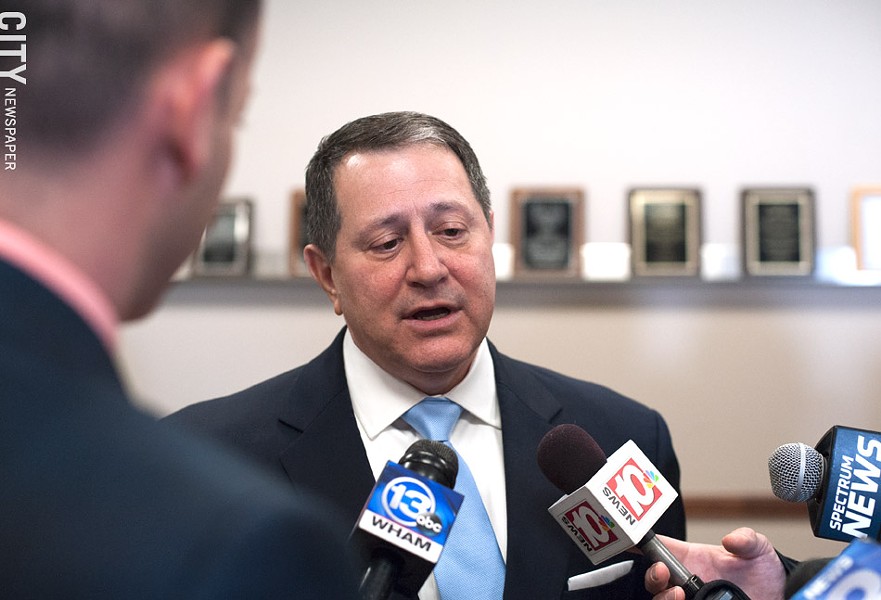 Morelle vowed to keep fighting for universal health care, to press for federal action on gun violence, to advocate for women's reproductive rights, and to support increased federal investment in cancer research. Morelle's daughter, Lauren, died last year at the age of 31 after a battle with breast cancer.

Rochester Mayor Lovely Warren, County Clerk Adam Bello, and Assembly member Harry Bronson all spoke in support of Morelle and, without any equivocation, said that they believe Morelle is the logical successor to Slaughter. He's an experienced and skilled leader who can bring people together and who's been an advocate for Greater Rochester, they said. Bronson added that Morelle has been a reliable ally of the labor community and the LGBT community.

Warren's support is key for Morelle. As she pointed out in her remarks, the two leaders have been at odds in the past. But she said she sees a Congress that won't reform gun laws, that won't protect women's rights, and  that doesn't acknowledge the reality of climate change. And Morelle has spent a long time serving the community, has helped secure millions of dollars in state funding for important investments, and will be able to hit the ground running.

Former Rochester Police Chief Cedric Alexander, Warren's deputy mayor, had been considering a run for the 25th District seat.  The mayor said she has great respect for some of the other people considering runs — Alexander was the only one she mentioned by name — but urged party members to unite behind Morelle.

Soon after the press conference ended, Alexander announced he wouldn't run. He sent out the following statement:

"I have been overwhelmed by the number of people who have reached out and encouraged me to consider a run for Congress. I have taken their advice and I have strongly considered running, however at this moment I do not believe it is the right time for me to run. While I believe my unique experience and background would serve our community well in Washington, I am very committed to helping Mayor Warren deliver her agenda for this great city and I believe my work as Deputy Mayor is not finished. Congresswoman Slaughter has set the bar very high for our next Congressional representative and I am hopeful they will honor her service by matching her work ethic and dedication to serve all the people. I will help them succeed in any way I can."

Anybody who wants to run for the seat has to file petitions by April 12; they have to collect 1,250 signatures from registered Democrats in the district. Rachel Barnhart, a former television reporter who has run for an Assembly seat and the mayor's office, is currently circulating petitions. Barnhart and her supporters began collecting signatures a week ago, and they're talking with voters while they do it, she said in an e-mail this morning. She'll consider data and issues, then make a decision, she said.

"We believe we are honoring Louise Slaughter and her advocacy for ballot access, democracy and women by engaging in this process," she said in the e-mail.

Brighton Town Board member Robin Reynolds Wilt, a Democrat, is also exploring a run. And School Board President Van White is also said to be considering it.

Morelle, however, has some other key supporters. Emily Robin Minerva, Slaughter's youngest daughter, and her husband, Michael Minerva, stood alongside Morelle's family as he made the announcement. During his remarks, Morelle mentioned how when he first considered entering politics he met with Slaughter, and she encouraged him to run for the County Legislature. Slaughter served as a mentor to Morelle, whom Minerva first met as a teen.

Her mom never thought about anyone taking her seat, Minerva said, but she thinks that she'd approve of Morelle as her successor.