More vital than ever, public-access stations ask Spectrum for help

When community leaders in Pittsford wanted to get out a message recently urging people to stop gathering on athletic fields, they turned to their local public access station.

East Rochester officials did the same thing when they wanted to let residents know that children shouldn’t be using public playgrounds.

ERCN, the station that serves both communities, helped get the messages out, as have countless public-access cable stations across the country whose traditional function as intra-community liaisons has become more vital amid a pandemic that has limited social interaction with local governments.

But John Schroth, the director at ERCN, wonders how many residents of Pittsford and East Rochester saw the communiques. His concerns stem from a change Spectrum made two years ago, when it abruptly moved public-access channels across upstate into what he calls “Siberia” on the dial — specifically, in ERCN’s case, to channel 1303.

For more than 25 years, public-access stations across greater Rochester were typically assigned to channels 12 and 25, positioned in the same block as WROC-TV (Channel 8), WHEC-TV (Channel 10), WHAM-TV (Channel 13), Spectrum News (Channel 1), and WXXI-TV (Channel 11). Today, they are relegated to the 1300s.

Now, Schroth has joined a chorus of other public-access stations and a handful of local government officials in pushing the cable giant to return the stations to the positions they held before Spectrum made the change with little warning in March 2018. Channels 12 and 15, Schroth noted, haven’t been used for anything since. 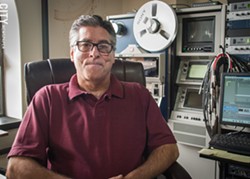 Schroth made his case in an April 1 e-mail to Spectrum’s local government liaison, whom he said, as of late last week, hadn’t responded.

He argued that relegating ERCN to channel 1303 has made it harder for people to discover and may give the impression to some that the station went off the air. Putting ERCN back with the other local channels would make the public access channel more accessible, he wrote.

“We all find ourselves in a position we have never been in before and where community programming is now more important than ever,” Schroth wrote.

Public access stations often bring to mind visions of homey or off-beat programming — think “Wayne’s World.” But many have, since their inception, covered and aired government meetings.

Amidst the coronavirus pandemic, ERCN is not only airing government meetings. It is also helping governments set up and stream those meetings for them to comply with state directives that they continue conducting business through videoconferencing.

In East Rochester, the station is working with clergy to air religious services and record messages to the community. It’s also broadcasting listings of local restaurants within its coverage area that are open for curbside pickup or delivery.

Spectrum pushed public access channels across into the 1300s, providing barely any notice to the stations about the move and sending one letter to customers about the change. The switch happened across its upstate New York as the company converted to an all-digital system.

At the time, Spectrum spokesperson Lara Pritchard told CITY that customers “like grouping channels by theme because it makes them easier to find, and it also reflects how people watch TV today.” Local public-access channels are now a tiny block positioned between some small, lesser-known networks, like the CW, and a smattering of foreign language stations.

As for the current requests of public-access stations, Spectrum isn’t budging.

Public-access channels “continue to be available to all customers in the same exact channel packages and tiers they have been for years,” Pritchard said in an email response to inquiries from CITY. “They’ve been grouped in the 1300s since our digital transition a couple of years ago. Spectrum’s interactive guide and remote make it easy for customers to quickly find and program their favorite channels.”

The company has in the past stated that removing analog signals from their channel lineups was meant to free up space that would allow faster broadband speeds and more high-definition channels.

Schroth’s missive, however, has received support not only from other public-access channels across the state, but from some of the local officials in its territory.

“I feel that there are many in my community, the Village of Fairport, who do not know where to find the broadcast version of our meetings,” Domaratz wrote, referring to her village board’s meetings. “I ask that you consider moving it back from the upper [channels] back to the lower channels.”

Howard Maffucci, a Democratic county legislator and former East Rochester schools superintendent, also chimed in on the e-mail chain. He forwarded along a copy of a 2018 proclamation he authored opposing the channel switch, which was signed by a few other Democratic legislators.

Maffucci said that during his time as superintendent he routinely sent information to ERCN and that public-access channels were valuable community resources.

“I think that moving those channels was silly,” Maffucci said. “Put them back where they belong.”