Their stories are strikingly similar: Five middle-aged men, all former Democrat and Chronicle paperboys in Brighton in the early 1980s, who claim they were sexually abused by their supervisor while on the job.

They spoke up one at a time, and mostly unbeknownst to the others, in the weeks since CITY and its media partner WXXI News first reported last month that another man, Rick Bates, sued the newspaper and its parent company, Gannett Co., for abuse he allegedly suffered as a paperboy in Brighton in 1983.

Their alleged perpetrator was Jack Lazeroff, who was in his 40s when he left a career in banking and found work overseeing newspaper carriers in Brighton and, later, according to former Gannett employees who worked with him, in Irondequoit and Charlotte.

A former paperboy's story of sexual abuse
Rick Bates claims in a lawsuit against Gannett Co. that he was sexually abused as a paperboy in 1983
By David Andreatta
News

In its court response to Bates's complaint, Gannett denied that Democrat and Chronicle employees knew of, or should have known of, the alleged abuse. The company also denied knowing that Lazeroff had a propensity to commit such abuse and that the newspaper had fielded complaints about his alleged behavior.

But one of the former paperboys, and the father of another, said they each complained to an employee of the newspaper. And the former head of personnel at the bank for which Lazeroff had worked said he was fired from there for molesting young male employees.

Kelby Ash, 48, said he was no older than 12 when he complained in person to a man who dropped off the newspapers he delivered each day.

"I'll never forget, his face went white," Ash said. "He was a young guy. And he said, 'Listen, I've heard things about Jack. I think you need to protect yourself. Never be alone with him, always protect yourself.'"

John Tracy, 89, said he called the Democrat and Chronicle after Lazeroff visited his home and groped his son, Paul Tracy, who was a newspaper carrier.

"I called the office and I let them know what I found out, that he had messed with my son, so they knew something about it," said Tracy, a former Monroe County probation officer.

Neither man recalled the names of the employees to whom they spoke, but said they lodged their complaints in the early 1980s. A Gannett spokesperson did not respond to inquiries seeking comment. Lazeroff died in 2003 at the age of 74.

What the men, and the others, said they recalled with clarity, however, was the approach Lazeroff took to pursue his alleged victims.

"He had this thing he would do," Ash said. "When you were alone with him, he would sit next to you, like leg-to-leg, and he'd have these sheets of paper out with subscribers' names and addresses.

"And he would put the sheets on his leg and your leg and he would run his hand over it, making marks on it," he continued. "It struck me as odd, but I didn't worry too much about it until one time he let his hand slip down and it made contact with my genitalia."

In his lawsuit, Bates claimed Lazeroff took the same approach with him.

Three of the five men who spoke to CITY and WXXI for this report have retained the same lawyer handling Bates's case. Two of the men said they had no plans to sue Gannett. The lawyer, James Marsh, said he and his clients are determining how to proceed, whether to file separate lawsuits or a joint lawsuit.

None of the men described their alleged abuse as being as extensive as Bates's, who claims he was abused on several occasions over many months and that the abuse involved oral sex.

Most of the men described being repeatedly groped or invited to fondle Lazeroff. Only one of the men knew Bates personally.

The men recalled their interactions with Lazeroff taking place in various locations - in cars, on living room couches, and in doughnut shops. But each man's story bore similar narratives of Lazeroff using decoys and misdirection to fondle paperboys.

Some of the men described Lazeroff stalking them while they were walking their routes in the pre-dawn hours. They said they would see his car, which they recalled being a maroon Buick Skylark, and hide in bushes, backyards, and behind snowbanks to avoid contact with him.

Lazeroff always approached them on their routes, they said, under the guise of wanting to help them finish early or, in the winter, to keep them warm. When they accepted his invitation for a ride, they said, there was a good chance Lazeroff would pounce.

"He would do this little act, like he was looking for something in the backseat, but then just take his hand and stuff it right down my pants," said Randy Penberg.

Penberg, now 51 and living in Atlanta, recalled what he said was his last interaction with Lazeroff in the winter of 1983.

"On this particular morning, he had unzipped his pants and asked me if I wanted to warm up my hands," Penberg said. "I yelled, 'No,' and darted out of the car. . . . I never got back in his car again."

The alleged abuse described was remarkable for its brazenness.

Paul Tracy, 52, who was a paperboy for nearly four years in the early 1980s, remembered Lazeroff visiting him at home. Tracy said he was laying on the floor in the living room playing video games when Lazeroff sidled up to him and began rubbing Tracy's genitals.

"My father was in the next room," Paul said.

He and his father, John, both recalled what happened next. Paul jumped up and told his father that he wanted Lazeroff to leave. Once Lazeroff was gone, Paul told his father what had transpired in the living room and that Lazeroff had fondled him in his car on a previous occasion. 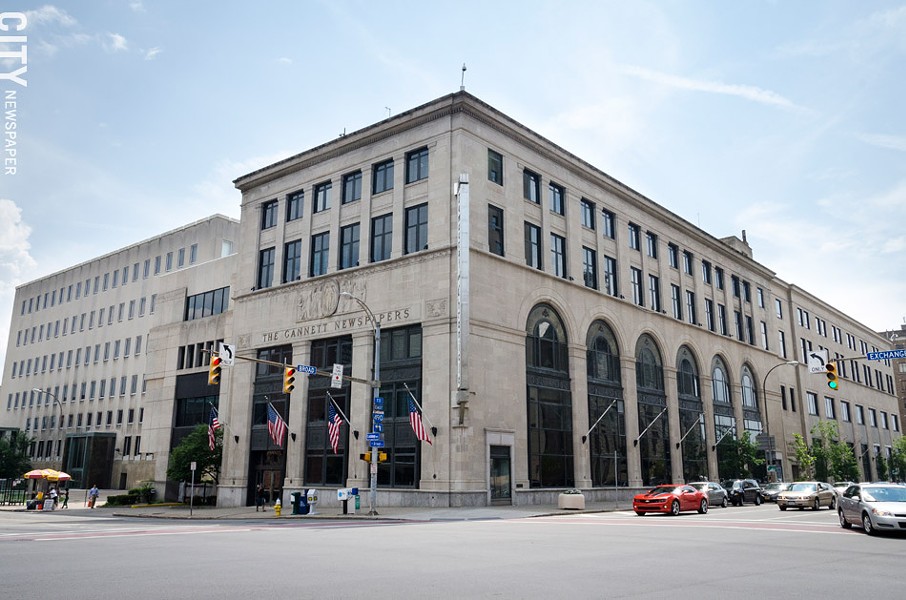 John said he immediately called the newspaper's offices to complain. Paul said he recalled his father making the call from the kitchen phone. Both said they never saw Lazeroff again and that Paul was assigned a new supervisor.

That supervisor told CITY he did not recall the circumstances under which he took over for Lazeroff in Brighton or of hearing complaints about Lazeroff.

Francis Goodsell, 51, who now lives in Germany, said Lazeroff groped him at home with his mother nearby.

"He brought a pair of pants that he said were his son's that he said would fit me, like he was bringing me a gift," Goodsell said. "He held the pants up to me and put his hands on my crotch. We were in the dining room. My mother was in the kitchen."

Goodsell said Lazeroff once fondled him in public at a doughnut shop, where Lazeroff had taken Goodsell after they had finished his route on a Saturday in winter.

"When we were driving home from there, he was like, 'Oh, your hands are cold,' and he said, 'Put them in here,'" Goodsell said. "He always used to wear sweat pants, and he picked up his sweat pants and wanted me to stick my hands down there. I saw his pubic hair."

The first time, in 1987, he was charged with disorderly conduct after employees of a doughnut shop in Greece complained to police that they had witnessed Lazeroff fondling boys in the restaurant. The police report identified the boys as paperboys.

The disposition of that case remains unclear. Greece police and court officials have said the records for the case could not be located.

Lazeroff was arrested a year later and charged with second-degree sexual abuse for an encounter he had with a teenage boy in a bathroom at Penfield Plaza. He pleaded guilty to disorderly conduct, a violation, in 1989.

Brazenness is a hallmark of some serial child molesters. An obvious and recent example is Larry Nassar, the former USA Gymnastics doctor who abused his patients with their parents in the same room.

"There are people who molest children with impunity and with increasing brazenness and under appallingly obvious circumstances," said Deb Rosen, the executive director of Bivona Child Advocacy Center.

"That is sort of compulsive behavior that sort of feeds on itself," she said. "Once the behavior is successful under one circumstance, it will be attempted under more and more circumstances until the offender is caught."

The brazenness with which Lazeroff allegedly abused paperboys might have come as no surprise to people who worked with him earlier in his life.

Prior to supervising paperboys, Lazeroff, a married father of three sons who lived with his family in Penfield, held down what appeared to be a successful career in banking.

He was an assistant vice president at the former First Federal Savings and Loan Association of Rochester by the time he was 38 years old. Newspaper articles from the era show he had held that position at least into his 40s in the early 1970s.

Mrs. Howe, who said she worked in public relations at First Federal from 1966 to 1971, recalled that Lazeroff oversaw student loans at the bank.

Howe, who, fearing retribution from relations of Lazeroff, spoke on the condition that she be identified only by her last name, said she and other employees witnessed Lazeroff groping young men applying for loans.

They saw him, she said, because Lazeroff sat in a glass office on the first floor near the elevators when the bank was located on Main Street in downtown Rochester.

"He was doing this in front of the plate-glass, floor-to-ceiling window," Howe said. "These were high school students, young men, coming in for college loans. It was awful."

Howe said she complained to her supervisor, but did not recall how it was handled.

"It went on and on and on, and the reason I think it was so terrible is that . . .  this all could have been prevented for all these young fellows that came along afterward," Howe said. "I just feel that if something had been done 50 years ago, all of these boys (paperboys) could have been saved and their lives wouldn't have been ruined. That's what bothers me the most."

Ellen deBuono, who retired as the vice president of personnel at the bank in 1980 and was a personnel manager during part of Lazeroff's tenure there, said she did not recall any complaints about Lazeroff abusing clients.

But she said Lazeroff was fired after the bank had fielded complaints from more than one male bank employee that Lazeroff had molested them at work. She described the alleged victims as young men and the degree of the molestation as groping or fondling.

First Federal was bought in 1997 by Marine Midland Bank, a subsidiary of HSBC.

Marsh, the lawyer representing the former paperboys, called the information about Lazeroff's time at the bank "very significant."

"That's very significant in terms of the believability of (the former paperboys) because this person had a reputation for engaging in this behavior a decade before he began supervising paperboys," Marsh said.

"It goes without saying," he added, "that there should have been a rudimentary check with his previous employer."

Includes reporting by Beth Adams of WXXI News, a media partner of CITY.

An earlier version of this story reported the age of Paul Tracy incorrectly. He is 52 years old. This story has been updated with the correct information.