Monster party at the theater 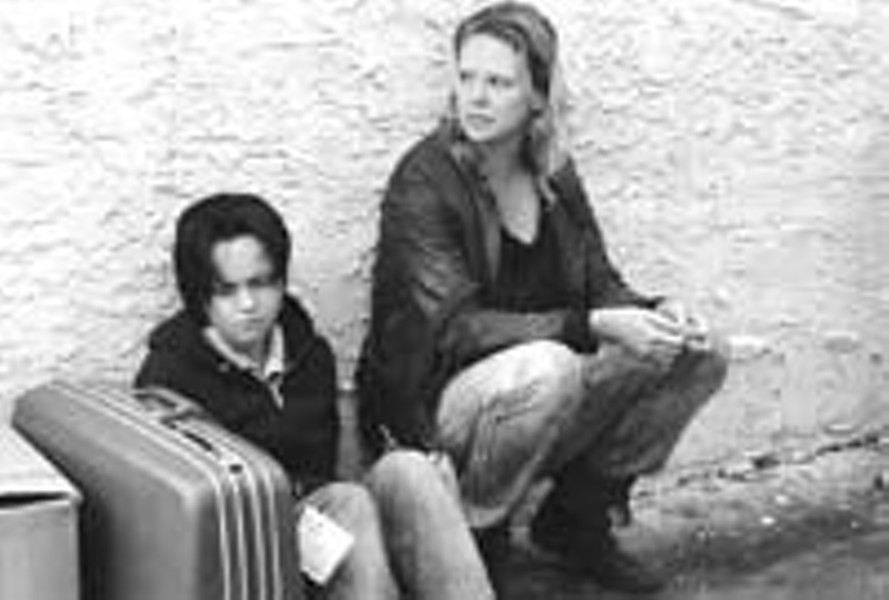 All you really need to know about Monster (opens Friday, January 23, at the Little), the new biopic about serial killer Aileen Wuornos, is that Charlize Theron's gut is this year's version of Nicole Kidman's nose. They were both highly publicized alterations to ordinarily extraordinary-looking women in an attempt to bury them deep within the real-life characters they portray on the screen. Well, that and to win Oscars.

The glaring difference between the two performances is that The Hours had Nicole's back, while Monster leaves Charlize hanging in the breeze. A comparison could also be made to Hilary Swank's turn in Boys Don't Cry, in that Hilary, like Charlize, acted in a bunch of crappy projects before de-glamming herself to within an inch of her career. But Boys also had Hilary's back, too.

Unfortunately, Patty Jenkins' picture is too busy dropping the ball to be anywhere near Charlize's back. My brother summed it up best by saying, "It's like a Lifetime movie, only with the volume turned up really loud." He's spot-on. Monster does nothing other than show Wuornos suffer through a lousy childhood and become forced into roadside prostitution because she can't get "normal" employment. And it implies, through Wuornos's comments and actions, that she does it all because of her treatment at the hands of men. It's only natural that such a story would evolve into a tale of a woman who ultimately takes seven lives.

I've got a better idea: Instead of going to a theater and paying to watch Monster projected onto a screen, why not go somewhere where they let you whack a man-piñata for 108 minutes? We wouldn't want to see movies about male serial killers who murdered hookers because their mothers didn't buy them the right Big Wheel when they were little.

Monster is a hypothetical dramatization of Wuornos's life from 1989 to 1990 --- even though the music would make a normal person guess it was the early '80s --- which is the period she did all of her killing. Aside from some opening-credit flashbacks and dialogue alluding to an awful childhood, we never really learn why Wuornos ended up blowing truckers for five bucks a pop (incidentally, Monster might be a lot more fun to watch if you imagine it's a Courtney Love biopic). Her motivation for murder is dramatization with a capital DRAMA. Nobody knows what really happened when Wuornos killed her johns, which makes Monster no less speculative than Bubba Ho-Tep.

But none of that is supposed to matter because Charlize is hidden behind lots of makeup (which makes her look like a cross between Carrie and a burn victim) and about 25 pounds of gained weight (you'll get to see every last ounce of it, too). And she's good, as well --- every bit as convincing as Nicole in The Hours and Hilary in Boys, and even more believable than Nicole in Cold Mountain (living alone with no food does more than muss your hair up a bit, by the way). Less successful is costar Christina Ricci, who plays Wuornos's sidekick, who looks like Frodo's kid sister next to the towering Charlize.

Jenkins's dull direction and unimaginative script keep Charlize's performance from being truly memorable. Instead, it's just a good role in a bad film.

Take equal partsTaboo, flash mobs, and The Voluptuous Horror of Karen Black, add a snort or two of heroin and songs from ABC, Pet Shop Boys, Dead or Alive, and Stacey Q, and you've got a casserole called Party Monster (screens Saturday, January 24, at the Dryden). Set in Manhattan at the end of Andy Warhol's reign, Monster takes the artists' idea of "profoundly superficial" invented celebrity to shockingly new and low levels as it tells the story of the Club Kid scene.

Club Kids, in case you were wondering, were shallow rich kids who liked to party in outfits that would stop Carson Kressley's heart. Monster is told through the eyes of James St. James (and it's based on his book, Disco Bloodbath), one of the scene's gurus. St. James (Seth Green) shows us the meteoric rise and fall of his friend-slash-adversary, Michael Alig (Macaulay Culkin), who goes from naïve Midwestern transplant to a party-throwing, magazine-creating, language-inventing, dumpster-smooching sociopath who anointed strangers with new titles immediately upon meeting them (whether it was "Boyfriend," "Drug dealer," or "Superstar DJ").

Writer-director team Fenton Bailey and Randy Barbato, who also created a 1998 LA Outfest-winning documentary about the same subject, have created something so awful, it's almost good. Like in a way Gigli could only dream of. If anything, Monster will make you appreciate Hedwig and the Angry Inch and John Cameron Mitchell's unbelievably strong performance. The Club Kid motto --- "We don't do; we just are" --- is fitting for the film, as well.

Tired of monsters but still have a little party left in you? Blow off the Golden Globes and get down to the Dryden on Sunday, January 25, for Philip Seymour Hoffman's unveiling of The Party's Over, his documentary about the six-month political journey that culminated in the 2000 presidential election. It's as one-sided as the interviewees (Susan Sarandon, Noam Chomsky, Michael Moore, Ralph Nader, et al) but since Hoffman will be there, you'll get a chance to ask him what the deal was with the hole in the crotch of his sweatpants in Along Came Polly.