Nostalgia-based fantasy stories are having a moment thanks to the popularity of "Stranger Things" giving viewers that "Goonies"-esque blend of horror and wonder set within the mundane, real world. A short live-action movie that falls in this genre is being planned by filmmakers and artists in New York City and Rochester, and is scheduled to be completed in early 2019. Right now, the creators are making a monster.

"The Molok" follows a young protagonist named Micah as he encounters an ancient creature lurking in a burned-down building. Inspired by the ancient god Moloch, which feeds off of people's repressed memories, the monster devours and assimilates their personal possessions. Micah's confrontation with The Molok takes place as he anticipates the loss of his terminally-ill mother. 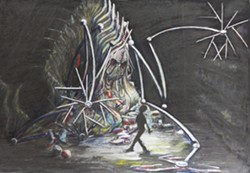 NYC-based filmmaker Sam T. Wilson and Xander Chauncey, who is also one of the film's producers, co-wrote the story with cult classic films like "Labyrinth," "The Dark Crystal," and "The NeverEnding Story" in mind. "The Molok" will feature practical effects and old school nostalgia, but with modern storytelling techniques, the creators say.

"The whole thing started here in Brooklyn with an idea I had to kind of rejuvenate that Henson-era fairy tale stuff," Wilson says. "It's trying to deal with some heavier issues, some darker stuff. We just felt there was a void in those kinds of stories being told, especially for children who really need them in this day and age."

The monster itself is being planned and built in town by Rochester-based artist Annalisa Barron, who relocated here from New York City after she took part in an artist residency at The Yards, which culminated in a performance with The Velvet Noose at the Memorial Art Gallery. The finished beast will tower 13 feet tall and be made of objects "sacrificed" by people from around the country and world.

"The original creature was just going to be a lever with something heavy on one end and basically a mask on the other, and we were looking for somebody who had some metalworking experience and could fabricate some pieces for us. But in asking some of the technicians and artists that we knew for tips, a friend of Xander's introduced him to Annalisa, and once we saw her work it was like, 'Wow, this could be so much more.' And then when we met up with her. The enthusiasm she brought inspired us to grow the project."

One of the project's missions is to bring storytelling back to reality from the digital realm, and the team decided that the monster should be made from real objects. "That kind of authenticity could make this more than a movie prop, more of an interactive community art project, where everybody was donating their own objects," Wilson says. "Sort of what the main character in the movie gets, but by giving up their own things, to free themselves from the negativity that's infused in those objects."

"With the art project it's a very cathartic community experience that can be shared by people outside of the film, too," says Nancy Pop, a Brooklyn-based producer who is managing the project's active social media, posting progress teasers to garner excitement around the film.

Barron is building the creature prototype in Rochester over the summer, and will complete the final version in the late fall. Also in the fall, the team will host a few community "object offering events" in both Rochester and NYC, where people can meet up and donate items that will be built into the creature. They're planning a NYC exhibition of the finished prototype and a talkback with Barron at Visual Studies Workshop. The movie will be filmed in Rochester starting in December, with a projected completion date in early 2019.

The team says that Rochester captured their imagination for this project due to its nostalgic warmth and working-class aesthetic. "We talked with Annalisa about the history of Rochester that she'd learned since she'd been there," Wilson says. "And we saw the story of Kodak, which is so analogous to the genre we've chosen to participate in -- the slow dying of a film company -- it's so perfectly illustrative of the kind of analog storytelling we're trying to infuse with life.

The archetypal child hero from the stories in the 80's was always a certain kind of "John Everykid" in American suburbs, Wilson says. But in an age where we're addicted to devices, the sense of exploring and adventure in childhood isn't as relevant. The filmmakers want to refocus on the importance and weight of imagination.

At the heart of the film is the scene when Micah enters the monster's lair, Wilson says. If the team finds the resources to do so, they'd like to open up the lair set as a location for the donation drive, and let the public walk in and see the sculpture in its true environment. "But we'd need a huge space for a long time to do that -- when we're looking at dream scenarios, that's one of them," he says.

The film's team also includes Edna Luise Biesold, who worked on "The Color of Time" and is here the director of photography; and Leah Hofmann, who was a puppeteer on "War Horse" is the puppetry consultant. Micah will be played by a friend's son, and The Molok will be voiced by Broadway and TV star Tom Hewitt. Novelist Steven Sherrill has donated his collection of 750 antique crutches, which will be built into the creature and serve as its bones.

Screenings of "The Molok" will take place in Rochester and NYC, and the eventual goal is to get it into the festivals circuit, and then possibly make a feature or other films based around it -- they have a plan for a feature if they find investors for it.

The team is engaged in a crowdfunding campaign to raise $50,000 on Indiegogo, which launched April 1 and is at about $9,000 currently. They're also looking for local sponsors for food and housing for the cast and crew and locations to shoot in Rochester. Follow the project at themolok.com, and on Instagram: @themolok.