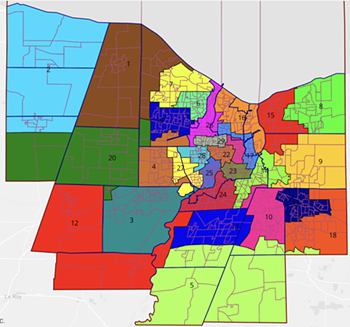 After a tumultuous process that lasted more than a year, the Monroe County Legislature has passed a plan to redraw all 29 of its districts.

County Executive Adam Bello plans to sign it into law.

Before Bello can sign the redistricting legislation, he must hold a legally-required public hearing on it. That hearing is scheduled for 11 a.m. Jan. 5.

On Thursday night, the Legislature, by a 27-2 vote, approved a plan that would create six majority-Black districts in the impoverished neighborhoods that ring downtown. The plan emerged as a compromise between Bello and Legislature President Sabrina LaMar, who had clashed over previous maps.

"This still remains the most important redistricting in the history of Monroe County,” LaMar said just before the vote was taken. “Tonight, we are correcting some injustices. For decades, even as Black people in the city of Rochester have grown to be a solid plurality of the city's population, the county legislative districts in the city have not reflected the city's demographics." 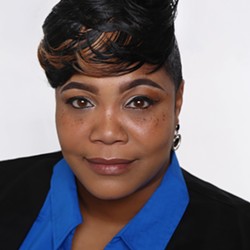 Previously, LaMar and her allies supported a plan that would have created five majority-Black districts in the neighborhoods around downtown. It drew the objections of most Democrats, who said they worried it would diminish the voting power of Black residents and other minorities. That proposal passed the Legislature, but Bello vetoed it, as he did a plan that was passed in late 2021.

After Bello’s veto, he and LaMar each released maps that had six districts where the majority of residents were Black. Those proposals spurred negotiations that led to the plan passed Thursday.

“The Legislature and I both believe that this redistricting plan offers positive change by delivering the fairest, most equitable map for the residents of Monroe County,” Bello said in a statement. “We now have a clear path to move forward and can work together for a better future for Monroe County.”

In the wake of Bello’s veto, two federal lawsuits were filed. The redistricting plan passed by the Legislature will likely resolve the lawsuits.