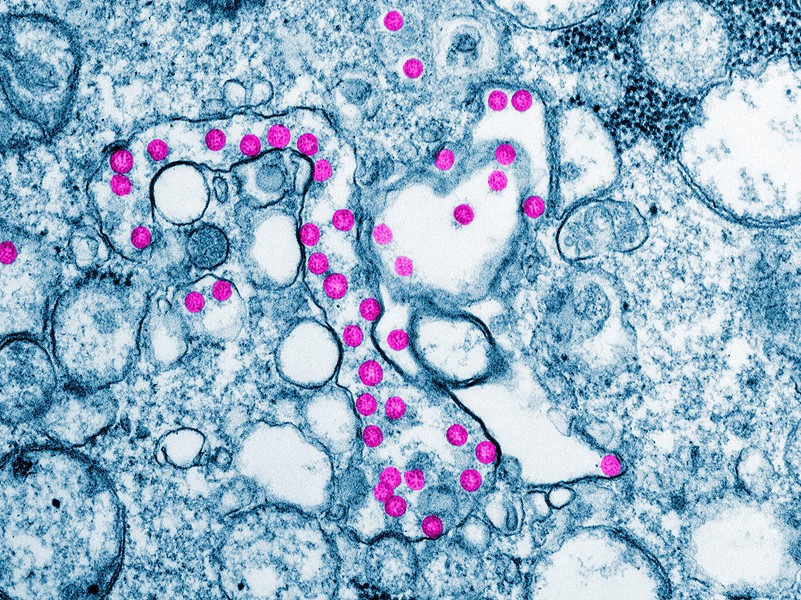 CREDIT CENTERS FOR DISEASE CONTROL AND PREVENTION / SCIENCE SOURCE / NPR Viral particles are colorized purple in this color-enhanced transmission electron micrograph from a COVID-19 patient in the United States. Computer modeling can help epidemiologists predict how and where the illness will move next.
The latest numbers on COVID-19 from Monroe County released on Sunday show a small decline from the previous day but numbers are still higher than what has been generally reported in recent weeks.

The Monroe County Department of Public Health says there were 39 new confirmed cases of the virus, down slightly from the 43 new positive cases reported on Saturday, and lower than the spike of 54 new cases reported on Friday.

There were no new deaths reported Sunday. The total is 300 to date.

Also on Sunday, Gov. Andrew Cuomo said that the latest numbers on the coronavirus show that the state overall is doing well in terms of keeping its number of positive cases under control. Cuomo said the state’s COVID positive-infection rate is .84%, the lowest it’s been since September 24.

He said that it is still hotspots, mainly downstate, that are the focus of additional enforcement and other actions to try to control the spread of the virus.

Cuomo also expressed some concern about the infection rate in Western New York, which includes the Buffalo area. The COVID positive rate there is 1.4%, and the governor said that number has not moved much in recent days. Cuomo said that officials have not identified any specific cluster that is causing that rate to go up.

The Finger Lakes region, which includes Rochester, was at a .9% infection rate in the numbers released on Sunday. That rate has generally remained under 1%.


Randy Gorbman is the news director at WXXI News, a media partner of CITY.