The email linked to an online Democrat and Chronicle story and video of the Irondequoit Bay Outlet Bridge opening for the winter season – an annual event that typically only warrants news coverage to remind motorists that the span is open to traffic for the winter season. 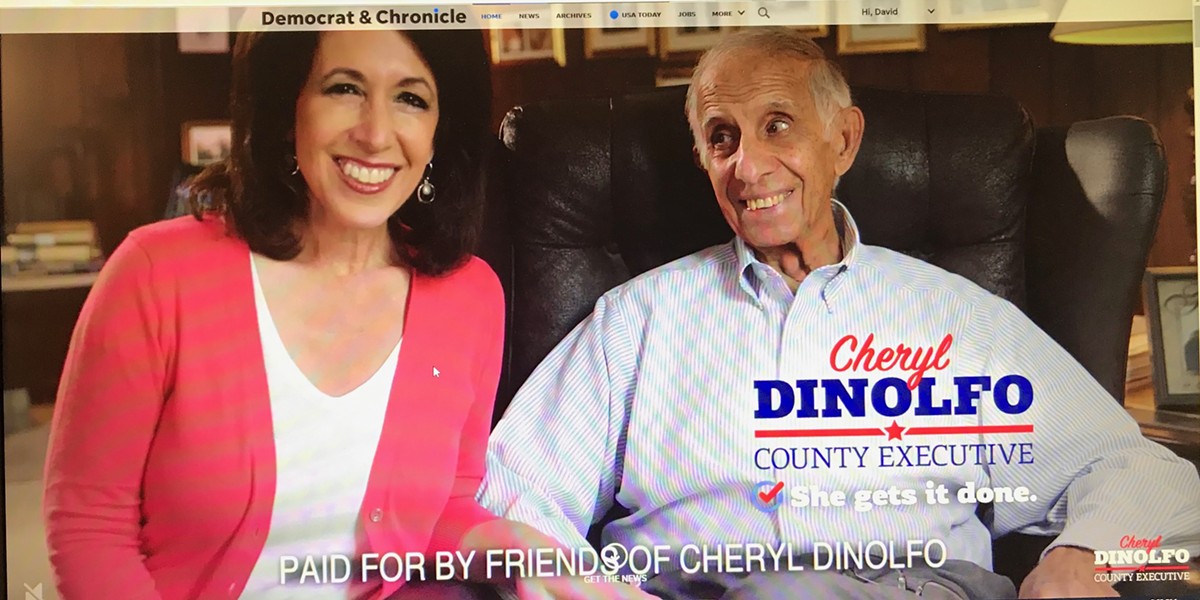 “Checkout (sic) the Democrat and Chronicle to see a video of MC DOT staff putting the Outlet Bridge into place for the winter season,” the text of the email read in its entirety.

What recipients found when they clicked on the link, however, was a full-screen political campaign commercial for Monroe County Executive Cheryl Dinolfo, who is running for re-election against her Democratic challenger, Adam Bello, the county clerk.

The ad, which featured Dinolfo’s father talking about her as a source of pride to her family overlaid by images of Dinolfo’s private and public life, played on a loop on the Democrat and Chronicle’s website.

Accessing the news story and accompanying video of the bridge required scrolling down the screen, at which point the commercial would fade away. The commercial popped up in front of other news stories as well.

Some employees viewed the email as a thinly veiled political mailing by the Human Resources director, Brayton Connard, who has been an active political supporter Dinolfo and her predecessor, Maggie Brooks.

State campaign finance records show Connard has donated $5,075 in the current election cycle to the Friends of Cheryl Dinolfo campaign committee, which paid for the commercial.

Jason Elliotto, president of the Monroe County Sheriff’s Police Benevolent Association, which has endorsed Bello in the race, cast the move as an abuse of authority.

He responded to the Human Resources Department with a message addressed to Connard that read in part:
“While we all agree that the men and woman (sic) of the Monroe County DOT work hard and do an outstanding job. I question why you would send a video linked email out County wide? I don’t remember any previous County wide emails that have been sent out praising the work of our County employees. . . . However, I decided to open the video and I quickly found my answer. Before the video plays, a large political advertisement appears for the County Executive. Speaking on behalf of the men and woman (sic) of the Monroe County Sheriffs PBA, we would prefer not to receive political advertisement videos in the future.”

Representatives of the Rochester Airport Firefighters Association and the Monroe County Deputy Sheriffs Association had similar reactions to the email.

Those unions have also endorsed Bello and, like most of the unions representing county employees, have a history of tensions with the county’s Human Resources Department over labor negotiations.

County spokesman Jesse Sleezer said Connard’s email was “well-intentioned” and called the negative reaction from some county workers an “overreaction.”

“It is rare for local media to feature raw footage of county employees doing the great work they do every day and, as such, this story presented a unique opportunity to recognize their efforts,” Sleezer said.

The Democrat and Chronicle video of the bridge being opened does not show any close-ups of county workers and is not new. It was first published in 2017.

In a prepared statement, Bello called the e-mail "a blatant misuse of county resources" and urged an investigation.

"It is inappropriate and offensive to county employees and county taxpayers, and it is particularly disturbing that such a political message would come from someone who is in a position of authority over these county employees," his statement read in part.