by David Andreatta and Brett Dahlberg 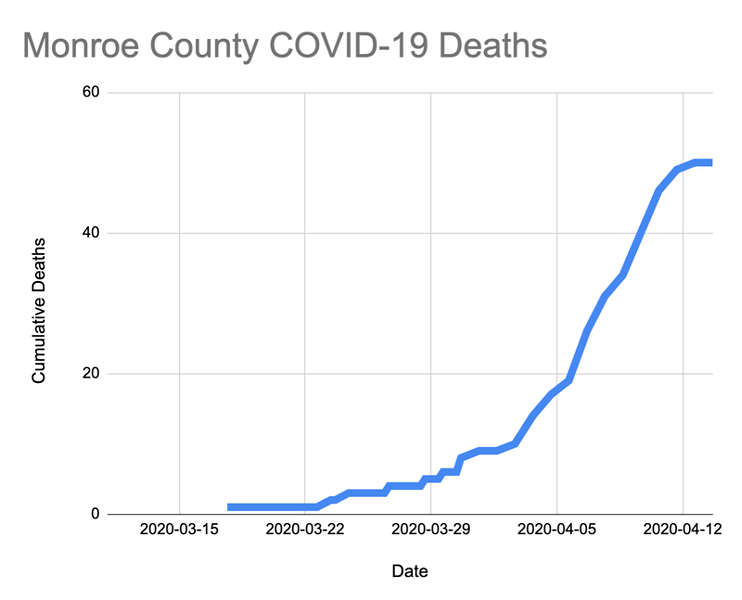 GRAPHIC BY BRETT DAHLBERG For the first time since April 1, data from the Monroe County public health department showed a day without a COVID-19 death.
Monroe County Health Department data on Monday showed no new confirmed deaths from COVID-19 in the county over the last 24 hours.

It marked the first time since April 1 that the county has not logged a death from the disease. A total of 50 people have died from COVID-19 in the county since the health department reported the first death almost a month ago.

New cases of the novel coronavirus that causes COVID-19 have slowed slightly in Monroe County over the last few days, but health officials said it was not a sign that the end of the epidemic was in sight and life would soon be back to normal.

The message dovetailed with that delivered earlier in the day by Governor Andrew Cuomo, who said the worst of the pandemic may be over in New York if residents continued to follow federal and state guidelines for physical distancing and limit their interactions with others.

His warning came as New York reported again that the number of patients on ventilators — an indication that a person is gravely ill — had continued to decrease, and that the state had recorded its lowest one-day death toll in a week.

Still, a staggering 671 people died of the virus on Sunday, bringing the statewide total to 10,056.

"The worst is over, if we continue to be smart moving forward," Cuomo said.

His call came after video of a large outdoor gathering on a street corner in Rochester in response to a triple shooting was widely shared on social media. Mayor Lovely Warren explained that police did not disperse that crowd because officials determined doing so could risk the safety of some participants given the heightened emotion of the situation.

In Monroe County, nearly 100 people were in a hospital for COVID-19 treatment on Monday. More than three dozen of them were being treated on ventilators in intensive care units.

The 23 people who tested positive for coronavirus on Monday ranged in age from under 20 to 90 or older, the county said.


David Andreatta is CITY's editor. He can be reached at dandreatta@rochester-citynews.com.

Brett Dahlberg is a health reporter with WXXI News, a media partner of CITY. He can be reached at bdahlberg@wxxi.org.