by Jeremy Moule and David Andreatta

PHOTO BY DAVID ANDREATTA Republican Monroe County Legislator Karla Boyce explains her decision to vote to repeal the "police annoyance" law she sponsored months ago, as Monroe County Executive Adam Bello, left, and Democratic Legislator John Baynes look on.
A bipartisan effort is under way in Monroe County to repeal a newly enacted law that made intentionally annoying a police officer or first responder a misdemeanor.

Among the legislators now looking to undo the law is its original Republican sponsor, Legislator Karla Boyce, who said Thursday she did not understand the implications of the law when she championed it last fall and has since had a change of heart .

"Sometimes you don't know what you don't know," Boyce said at a news conference flanked by Democratic legislators and County Executive Adam Bello. "To look through somebody else's lenses you have to look at your heart and what you believe is right, and so I stand here today to say that to you."

In a joint letter to legislators urging the law be overturned, Boyce and Democratic Minority Leader Vince Felder, a vociferous critic of the measure from the outset, wrote that there were "valid, unforeseen concerns and consequences" with the law.

Specifically, the letter, dated February 11, stated "the perceived vagueness of the local law by the public and law enforcement could potentially criminalize constitutionally protected conduct."

The law, officially named “Prohibited Harassment of a Police Office, Peace Officer or First Responder in Monroe County,” criminalizes action that intentionally “annoys, alarms or threatens the personal safety of an officer” and carries a penalty of up to a year in jail, up to a $5,000 fine, or both.

The legislation was passed along party lines by a 17-10 vote and signed into law by former County Executive Cheryl Dinolfo in December over the objections of Democratic legislators, criminal defense lawyers, and social justice activists who warned the measure was redundant, overly subjective, and unconstitutional. 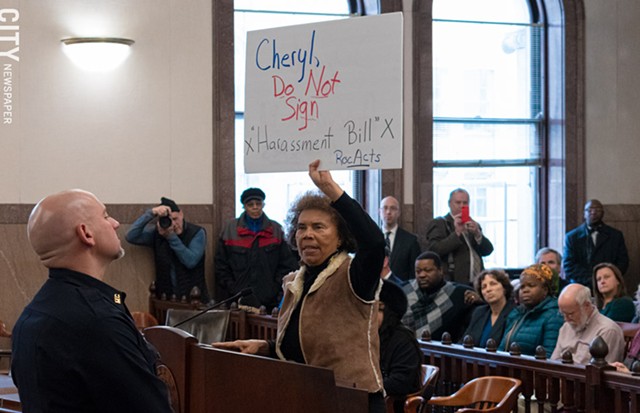 After the measure became law, a string of police leaders, including Monroe County Sheriff Todd Baxter and Rochester Police Chief Laron Singletary, said they would not enforce it. The president of the Rochester police union, Michael Mazzeo, panned the law, saying it did not represent the needs or wants of his officers.

Mazzeo on Thursday released a statement saying, "The repeal of the legislation is how democracy, good government, and elected officials should work."

Felder told reporters at the news conference that he was pleased "it's done."

"I'm glad we're not going to have to deal with this," Felder said. "Even though the police departments said they would not enforce it, the fact that it was on the books always gave it the potential to be enforced."

A repeal requires a simple majority and with Republicans holding a one-seat majority, Boyce would have cast the deciding vote to overturn. She said, however, that her Republican colleagues would join her and that the law would be repealed unanimously.

The repeal legislation is slated to go to committee later this month. If it passes, the Legislature will vote on it in March.

Boyce and Felder cast the agreement to undo the law as "mutual," and Boyce said she had been talking with Felder and other critics of the law since at least late December.

She singled out the Rev. Lewis Stewart, president of the United Christian Leadership Ministry and a vocal opponent of the law, for helping her understand its ramifications, particularly in communities of color.

A repeal has potential political implications for both the Bello administration and Boyce.

For Bello, the development is an early win for his administration, which he ushered in with a pledge to bring a spirit of bipartisanship to his office amid a divided government.

Overturning the law could serve to erase a stain on the record of Boyce, who  has spent much of her professional life working with troubled youth, and free her to run for higher office.

Asked directly if she had plans to run for another office this year, Boyce temporarily froze and shrugged before saying, "I may consider something, but I don't know that for a fact."

Boyce, who represents Henrietta, Mendon, Pittsford, and Rush,  declined to say which office she may seek.

"Sometimes you've got to put the politics aside," she said. "I grew up with knowing what was right and what was wrong."

This story has been updated from its original version to reference the letter from Boyce and Felder to the Legislature.