by David Andreatta and Jeremy Moule

June 01, 2020
Activists in the local Black Lives Matter movement who organized a demonstration Monday outside the Hall of Justice from 2 to 5 p.m. have postponed the event — but not before authorities closed the courthouse out of an abundance of caution.

An Instagram post advertising the event circulated widely on social media Sunday and Monday and indicated protesters “will lay down and yell ‘We can’t breathe,’” a reference to the final words of George Floyd whose death at the hands of a Minneapolis police officer has provoked demonstrations nationwide.

A purported organizer of the event posted a Facebook message late Sunday, at 11:40 p.m., that read the rally was orchestrated at the last minute and that in order to ensure "that this is executed properly and efficiently" it would be postponed. 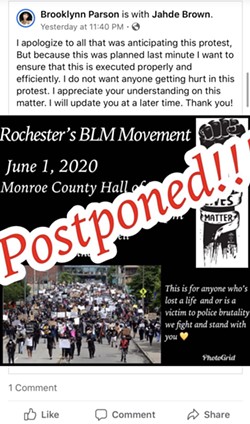 The rally was to come on the heels of what began as an orderly rally in Rochester on Saturday that devolved into chaos and looting in the evening and overnight into Sunday.

City and county officials have repeatedly blamed “outsiders” and “outside anarchists” for the mayhem, suggesting that those responsible for the violence were not associated with the Black Lives Matter movement at the heart of the demonstration.

But the prospect of more violence prompted the Rochester region’s chief administrative judge, Justice Craig Doran, to close the Hall of Justice building at noon Monday.

“As the result of information received regarding a planned rally in the vicinity of the Monroe County Hall of Justice, located at 99 Exchange Boulevard in Rochester, and out of an abundance of caution for the safety of all, the courts at the Hall of Justice in Rochester will close as of noon today,” Doran said in a statement.

The courthouse is next to the Public Safety Building, which is the headquarters of the Rochester Police Department and was the terminus for Saturday’s demonstration. 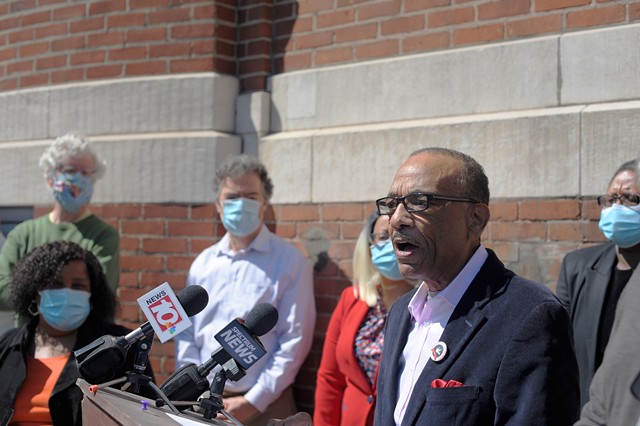 It was a peaceful, diverse, well-organized gathering that provided “a sincere call for justice," he said. But, he added, the chaos and looting that came after distracted from that call for justice and made the day about violence.

Like city and county officials, Stewart, too, blamed the melee on "agitators" and "white ideologues" whom he said came with the intent of provoking confrontation and who hijacked the protest. He also rebuked the destruction and looting that took place through the weekend.

“Please stop the criminal and violent behavior,” Stewart said as he spoke to reporters in front of Downtown United Presbyterian Church. “Go home. Stay in the house. Get an education. Learn what racism is all about, study black history. But get your act together. Violence and destruction achieves nothing. The message of justice got lost in the criminal behavior of others.”