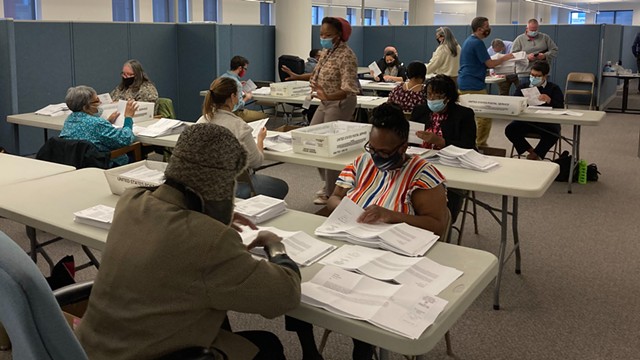 The Monroe County Board of Elections at 10 a.m. on Monday began counting the more than 103,000 mail-in ballots it received in recent weeks. Those votes will determine the outcome in several highly-contested races and officials expect the counting to take all week.

State law requires Boards of Election across New York to refrain from opening and counting ballots for a period of time after an election. The requirement provides a window for absentee ballots postmarked on Election Day — including military ballots — to be delivered to the boards.

Perhaps the closest high-stakes contest in Monroe County is the one for the 56th District of the state Senate. At the end of early and Election Day voting, Democrat Jeremy Cooney led Republican Mike Barry 46,469 to 45,587, or 50.3 percent of the vote to 49.4 percent.

On paper, Cooney had the advantage headed into absentee counting. Countywide, registered Democrats completed twice as many absentee ballots as registered Republicans. Of the roughly 35,000 absentees cast in the 56th District race, 17,489 came from Democrats while 7,582 came from Republicans.

Democrat Samra Brouk had a more comfortable lead against her opponent, Republican Chris Missick, for the 55th District state Senate seat. She had 59,560 votes to Missick’s 54,504 for a breakdown of 49.9 percent to 45.7 percent.

Brouk is likely to keep her lead, much for the same reason Cooney has an advantage in his race. Of the 41,695 mail-in ballots received by the county Board of Elections by Nov. 9, 20,710 were from Democrats and 8,765 were from Republicans.

The Ontario County Board of Elections received 3,872 absentee ballots for the 55th District race; 1,569 came from Democrats and 1,120 came from Republicans. The board started counting absentees last week and will continue this week.

Absentees could also flip the outcome of the 135th Assembly District contest, where incumbent Republican Mark Johns led Democratic challenger Jen Lunsford 32,599 to 26,344, or 55.3 percent to 44.7 percent, as of the close of polls on Election Day. As of Nov. 9, the Board of Elections had received almost 25,000 mail-in ballots for that race. Of those, 10,448 were from Democrats; 6,222 were from Republicans; and 6,411 were from voters not registered in a party.