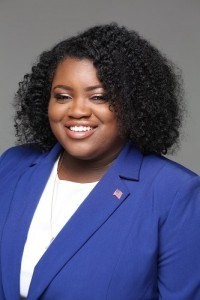 Brittaney Wells has held the dual roles for the better part of two years, having been named the party's executive director in August 2018 and elected as the party's chair two months later in October. The chairperson serves a two-year term, which is to end on Oct. 3.

Wells' departure comes at a tumultuous time for county Democrats, who have seen rifts within the party open wide over an epic internal fight over the appointment of a new Democratic county elections commissioner that resulted in a mutiny by Democratic county legislators to oust their caucus leader.

That leader, Legislator Vincent Felder, was replaced by Legislator Yversha Roman after a vote of nine of 14 legislators in the caucus late last month, although neither he nor the president of the Legislature, Republican Joseph Carbone, has formally recognized Roman as the new minority leader.

Republicans hold a one-seat majority in the 29 seat Legislature.

Prior to assuming formal positions within the party, Wells was the campaign manager for Mayor Lovely Warren's re-election bid in 2017 and director of the city's Office of Community Wealth Building in the Warren administration.

Wells told party leaders of her departure in an email Thursday that said she had resigned the executive directorship on Aug. 28, but would remain as the chair through her term to aid in the transition to new leadership.

In her email, she said it was an honor to serve the party and noted accomplishments that included flipping village and town governments in Fairport, Rush, and Webster to the Democratic side of the aisle.

"For the first time in MCDC's history we have presented the largest and most diverse slate of candidates ensuring that all voices have a place within the party," Wells said. "I've enjoyed every part of this journey but after much reflection on the events that have occurred over the past six months I will not seek re-election."

She thanked her leadership team, including the party's lawyer, Nathan Van Loon, and others for their support. Without them, she said, "I would not have made it through many difficult days."

Wells made no mention of her plans for the future.

Van Loon said in a brief phone interview that the process for choosing a new chairperson falls to a vote of committee members. The executive director serves at the pleasure of the chairperson, although there have been times in the party's history that the roles are held by the same person.

As of Thursday afternoon, at least one person, Zachary King, had announced his candidacy to lead the party. King has served as field director for Rep. Joe Morelle and the late Rep. Louise Slaughter.