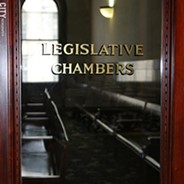 The Monroe County’s Legislature redistricting commission has set a series of hearings to get public input on redrawing the body’s 29 districts.

The commission has until June 11 to submit new district maps to the Legislature as part of the once-a-decade process, which always follows completion of the decennial federal census. The hearings are scheduled for:
A hearing that had been proposed for April 26 was nixed because it conflicted with other Legislature meetings and could be rescheduled for April 28.

The Legislature approved a set of maps late last year, but they were controversial. Critics argued that some of the redrawn districts broke the law and that the maps were drawn with inadequate public input. The previous committee that drew the maps held three hearings prior to submitting them to the Legislature. County Executive Adam Bello ultimately vetoed the maps.

During the newly-formed commission’s first meeting last week, Legislature President Sabrina LaMar said the group planned to double the number of hearings held this time around to get “as much input as possible.”

The commission also approved a contract, not to exceed $20,000, with ArcBridge Consulting & Training to aid in drawing the maps. The company was one of several contenders for the award and its promise to offer a feature where residents can look up their district by address online was a major selling point among commission members.

This article has been updated to correct the date of the Henrietta hearing.