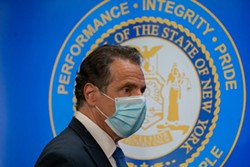 New York state officials have designated the city of Rochester and several Monroe County towns as a COVID-19 microcluster, a move that brings with it some restrictions as well as additional testing in schools.

Governor Andrew Cuomo announced the designation during a call with reporters Monday, though the move had been expected since last week. Monroe County has seen a steady increase in COVID-19 cases since late October, with a spike in numbers over the weekend. The county reported 174 new confirmed cases on Friday, 211 on Saturday, and 256 on Sunday. As of Sunday, the county had a seven-day rolling average of 155 new cases per day.

“We have definitely entered a new phase with COVID,” Cuomo said at the start of the call.

Cuomo also announced that parts of Erie and Onondaga County, which like Monroe have seen their COVID-19 case counts surge, have also been designated as microclusters. All three counties will have “yellow” status, which is the lowest classification, followed by orange then red.

The areas under yellow status will face some additional restrictions. The size limit for gatherings will decrease to 25 from 50, school will be required to test 20 percent of students and staff every week, and restaurants and bars must close by midnight as well as refrain from seating more than four people at a table. Limiting the number of people at a table helps minimize contact between unmasked people from different households or groups, explained County Executive Adam Bello during a separate news conference Monday.

“It’s a wake up call,” Bello said. “How the virus spreads in Monroe County is entirely up to us,” Bello said, noting that many of the cases stem not from businesses or public places, but from private gatherings where people from multiple households were present and didn’t wear masks or properly distance.

The state has used the microcluster approach to some effect in other counties. At one point, 8 percent of COVID-19 tests in Broome County in the Southern Tier were coming back as positive, Cuomo stated. A combination of restrictions, discipline, and enforcement dropped the rate to 3.5 percent, Cuomo added.

“A microcluster is not permanent, it is not a scarlet letter,” Cuomo said. The designation disappears once the infection rate is back under control, he added.

Bello and Dr. Michael Mendoza, Monroe County’s public health commissioner, bluntly stated what’s at stake if residents aren’t more vigilant about wearing their masks, adhering to physical distancing guidelines, and socializing safely. If cases and the rate of positive tests continue to climb, schools and non-essential businesses could close. Families also might not be able to safely celebrate the coming holidays together, they warned.

“We now have a curve that we must again flatten,” Mendoza said. “Now is not the time to fall victim to COVID apathy.