February 27, 2020
The leader of the New York State Senate said it's likely that changes will soon be made to the state's new bail reform laws, which end most forms of cash bail for nonviolent offenses.

Meanwhile, the state's chief judge also called for amendments to the laws. 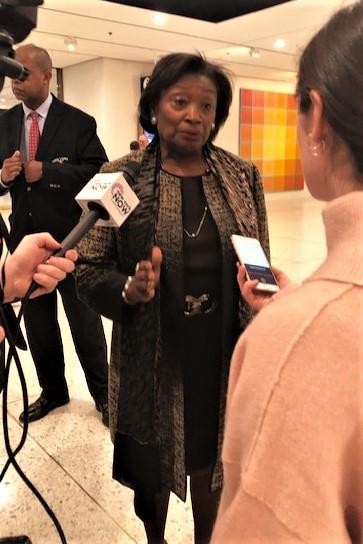 Since the law took effect on January 1, law enforcement groups have highlighted select cases of repeat offenders going free under the new rules. Some Democratic senators in more conservative districts have expressed concerns.

Senate Majority Leader Andrea Stewart-Cousins, a Democrat, defended the original law Wednesday, when she spoke at an event at the Albany Times Union Hearst Media Center. She said most of the people who could not meet bail and were forced to spend weeks and even months in jail were black and brown, while wealthier white people have always gone free.

She’s said cases highlighted by law enforcement where repeat offenders were released on their own recognizance has been "fearmongering."

Stewart-Cousins, the first African-American woman and first woman to lead the Senate, said a proposal in the Senate would grant judges more discretion to detain potentially dangerous defendants. It would also end all cash bail. The proposal shouldn't be considered a "rollback" of the laws and can even be viewed as enhancing them, she said.

"It is not a rollback," Stewart-Cousins said. "If it's anything, it would be a rollback on cash bail."

She said judges will have a list of criteria to decide whether someone is too dangerous to release on their own recognizance.

"There's going to be limited discretion with guardrails," Stewart-Cousins said.

Judges would be allowed to consider factors like whether the defendant poses a flight risk. But judges would not be given complete discretion because New York could then slide back to what was the inequitable system that existed before the bail reform laws took effect, she said.

In her annual State of the Judiciary speech, Court of Appeals Chief Judge Janet DiFiore praised the bail reform laws and said the old rules "disproportionately harmed" those who could not afford to meet bail. But she added that there have been some unanticipated and unintended consequences that need to be fixed.

"I believe that without compromising the purity of its purpose, the new legislation can be amended — and strengthened — to recognize a narrow exception allowing judges, after a full and fair adversarial hearing, to detain a defendant in those few and extraordinary cases where such a credible threat exists," DiFiore said in her speech.

DiFiore said judges in New York City in recent years have already begun setting bail more sparingly, from 48 percent of cases in 1990 to 23 percent in 2018. She said there's been a "conscience cultural change" over perceived unfairness in the criminal justice system.

Governor Andrew Cuomo, speaking to reporters on Wednesday, said he also thinks there should be some tweaks to the new law as part of the budget.

"I have no doubt that there are consequences from that reform that will require additional reforms," Cuomo said. "And we will be making them."

Assembly Speaker Carl Heastie, who championed the bail reform laws last year, said he still wants more data before reversing any provisions. Heastie, who holds a bachelor's degree in statistics and a master's in finance, said a report by the New York Police Department saying that crime spiked in January is in dispute.

"One month's worth of statistics is not enough of sample size to tell if it's a spike, a trend, or a momentary happening," Heastie said.

Lawmakers have about a month to make a decision. The budget is due at the end of March.