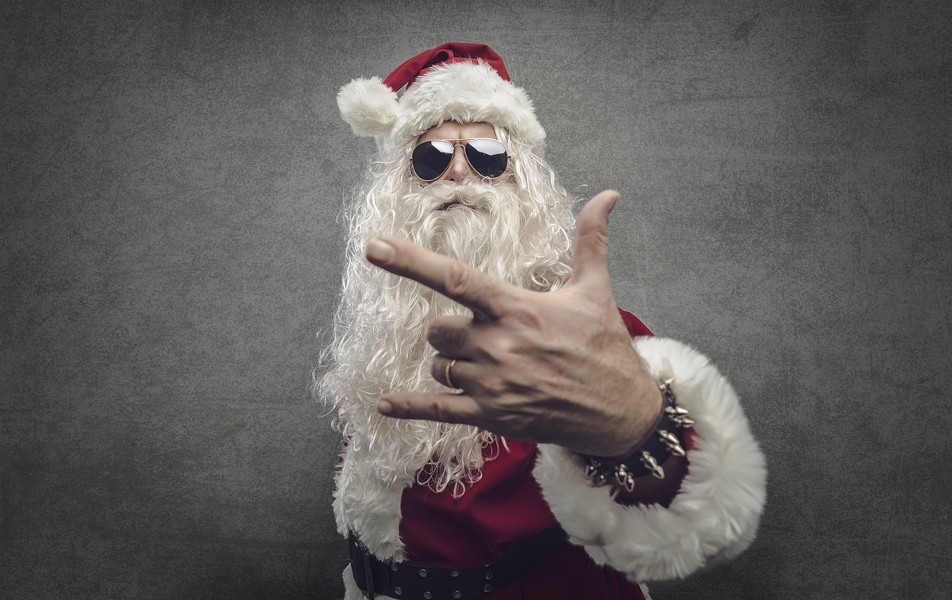 I do not like Christmas music. Never have. For several Yuletides now, I've been running a highly scientific poll to determine the most widely-detested holiday songs. The winner each year is something called "Christmas Shoes," which I thankfully have not yet been subjected to. My plan is to never break this streak.

A close runner-up is Sir Paul's "Simply Having a Wonderful Christmastime." I have a recurring nightmare where that song is stuck on my car stereo and there is no choice but to drive the whole thing off a cliff.

Beyond showing that I'm awfully well-adjusted, this lifelong distaste for the sound of jingling bells and children's choirs makes me the perfect arbiter for what good holiday songs actually sound like. If you're similarly disinclined to hear the same tired music year after year, read on.

Marvin Gaye: "I Want to Come Home for Christmas"

The year is 1972. Marvin Gaye is on top of the world, and his masterpiece "What's Going On" has already gone double platinum. The follow-up release, "Let's Get it On," is about to cause an entire generation of babies to get made. What did he do in the middle? Of course he wrote this beautiful holiday song about a prisoner of war who wants to come home to see his family but can't. The release was cancelled and the track stayed on the shelf until 1990, when it emerged as a posthumous reminder that we truly didn't deserve Marvin Gaye.

The Ramones were struggling for relevance by the time 1989's "Brain Drain" came out. In retrospect it looks like a bright spot at the end of their career, as both this tune and "Pet Sematary" hold up to seasonal listening. I can't say much more than that — it's a Ramones song. Play it loud and enjoy.

Tom Waits: "Christmas Card from a Hooker in Minneapolis"

This track is a Christmas song in the same way that Die Hard is a Christmas movie; the holiday is just a MacGuffin for the real story. Penned just before Waits got his life together, it's a bleak first-person character sketch set in the Retro-Americana underworld he was haunting at the time. It's also the only Christmas song I can think of that starts with the line, "Charlie, I'm pregnant," so there's that.

"Santa Dog" was a really weird track when it came out in 1972. The Residents went on to rerecord it in a different style every few years for the next four decades. My personal favorite is this eerie gamelan version. It's alternately intricate and sparse, and the musicianship is more impressive for having been performed while wearing giant eyeball-shaped masks.

I don't think this is actually a Christmas song. But The Music Tapes (a project of Elephant 6 collective and Neutral Milk Hotel member Julian Koster) used to hit Rochester on their annual holiday house show tours. When my housemates at The Shark Tank hosted them about a decade back, I recall a surfeit of sweaters, many strings of lights, and the band inexplicably lighting a small fire on my neighbor's lawn during the show.

Sharon Jones & the Dap-Kings: "Please Come Home for Christmas / Ain't No Chimneys in the Projects"

A year before her untimely death in 2016, Sharon Jones recorded a whole album of holiday music. It's so good that I couldn't choose just one track. "Please Come Home for Christmas" is the best version of the song yet recorded, with gorgeous retro production backing Jones' vocals. "Ain't No Chimneys" is an uptempo original, and the contrast between the two songs shows off the Dap-Kings' range as masters of their craft.

"Greensleeves" was written sometime around 1580 as a mildly bawdy ballad. At the time, green clothing — I'm not making this up — was associated with grass stains from fornication al fresco. Some buzzkill changed the lyrics from a lovelorn lament for a pulchritudinous partner to a song about Baby Jesus in 1865, and it was stuck that way until Leonard Cohen fixed it in 1974.

Holiday playlists are the reason that this track is the first place a lot of people hear 'Trane, which basically makes it a gateway drug for weird jazz. One minute you're asking Siri what's playing on the cafe stereo while you wait for your macchiato. The next thing you know you're using words like "woodshed" unironically and trying to transcribe Ornette Coleman solos by ear. Sorry folks, I don't make the rules. Play this for the fam and ruin your little cousins' lives by making them want to go to music school.

Bob Dylan's 2009 release "Christmas in the Heart" is a powerful album in that it has the remarkable capacity to clear out a room. I subjected myself to the entirety of this record three times last year because I couldn't believe it was real. I can sadly confirm here that it does, indeed, exist. Dylan plays the standards without a hint of irony, and it gives a whole new meaning to roasting chestnuts. Put it on the stereo after a holiday party to get the last few guests off your couch.

Some people would object to the absence of Venom, King Diamond, or Christopher Lee's metal Christmas tunes on this playlist. We have a word for these people: posers. I don't want to sound like some sort of be-mulleted, Camaro-driving, retro purist here, but we only ever needed one metal song about Christmas, and we got it out of the way in 1970 on the first metal album ever recorded. While totally secular in content, "N.I.B." was purportedly an acronym for Nativity in Black, and Nativity means Christmas. I rest my case.

Majorettes: "It's Gonna Be a Punk Rock Christmas"

London-based garage punk quartet Majorettes breathed new life into this 1977 single by The Ravers, which had been largely forgotten at the time. Majorettes have since broken up, but this is an example of that rarest of musical accomplishments — a sugary pop-punk Christmas track that doesn't make me wish I were having some sort of painful oral surgery instead. It was recorded for a Cleopatra Records compilation called "Riot Grrl Christmas," which is worth a spin.

This track breaks my hard and fast "no sleigh bells" rule. If you've been under a rock for the last few years, Run the Jewels is an iconoclastic hip-hop duo known for big noisy beats and verses that blend anti-authoritarian politics with skewering humor. "Miracle" is the closer from the band's eponymous debut album, and its uncharacteristically sincere lyrics are offset by the over-the-top kitsch of the music video.