Mixed messaging confuses organizers about whether to hold events 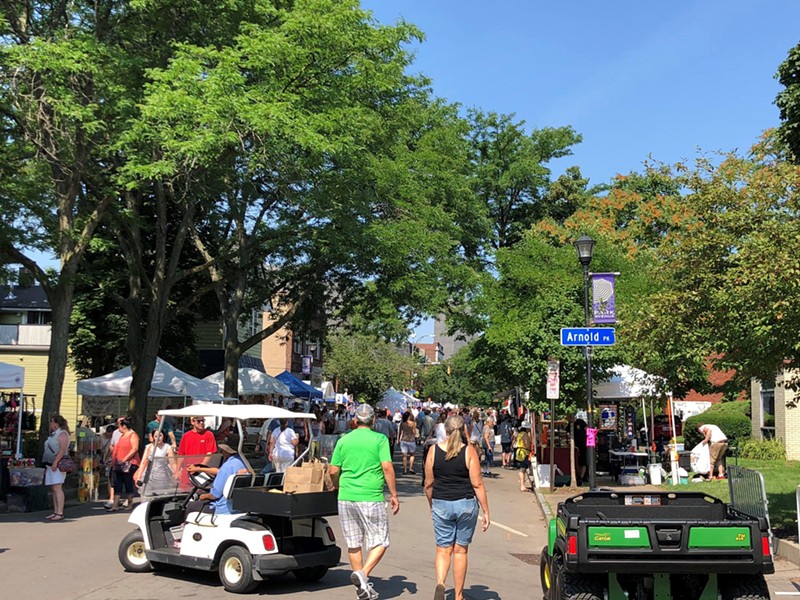 PHOTO BY RANDY GORBMAN / WXXI News Park Avenue Summer Art Festival.
Even as COVID-19 vaccination rates grow and the Centers for Disease Control and Prevention eased its recommendations for outdoor masking, another Rochester summer festival has been canceled.

Some say government leaders are sending inconsistent and confusing messages on what is and isn't safe.

Lisa Hubler with the Park Avenue Merchants Association said the decision to call off the Park Avenue Summer Art Festival for the second straight year was made in early April. She said it came down to the New York state guidelines.

"The toughest part for us was that the goal posts kept moving a little bit," Hubler said. "It was hard for us to gauge what we needed to do in order to make it happen."

The announcement comes just a day after Gov. Andrew Cuomo announced that the New York State Fair would return in August at 50 percent capacity. But Hubler said that would not be realistic for an event like the Park Avenue Festival, which draws more than 200,000 people in a typical year.

"We cannot do a festival on Park Avenue at 50 percent capacity," she said. "It's just too complicated to monitor the ins and outs of people coming."

Hubler added that decisions about this year's festival had to be made in advance to give vendors enough notice. She said most of them were not surprised by the cancellation because arts shows and festivals in other states have been canceled.

"It's unfortunate. It's a very sad day for all of us. This wasn't something we wanted," Hubler said.

Just last week, organizers of the Corn Hill Arts Festival said, due to the coronavirus pandemic, it would not be held in July.

Some question whether some of the safety concerns about outdoor events make sense when, by some estimates, the risk of COVID-19 transmission is 19 times lower than indoor settings.

"It actually could save lives to do that, because if you're not encouraging people to go outdoors, they will stay indoors where the rates of infection are much, much higher," she said.

Barnhart sees the cancelation or refiguring of summer festivals as an equity issue.

"People with money can spend on indoors and outdoors entertainment and they can keep themselves safe," she said. "People without money don't have those options and outdoor free events are for everyone."

The Lilac Festival will return to Highland Park on May 7, but the event will be limited to three consecutive weekends, rather than the traditional ten-day run. Tickets for socially distanced seating are on sale for specific festival events including craft beer and wine expos.

"In our effort to be safe, we have moved an outdoor event into tents — an event that you have to buy tickets for," said Barnhart. "That's not following science. That's making an event exclusionary."

Hubler said her organization is considering plans to celebrate the Park Avenue Festival this August in a smaller way.

"We're hopeful that 2022 will come back and will be bigger and better than ever," she said.