September 17, 2019
In defending his application for $535,000 in tax breaks to help finance a $10.3 million expansion of Midtown Athletic Club, the club’s general manager Glenn William told WXXI’s Connections last week, “Midtown’s not for everybody.”

With individual and family memberships at $177 and $336 a month, respectively, he wasn’t kidding.

But Monroe County’s industrial development agency, Imagine Monroe, made sure every county taxpayer paid a fraction of the expansion when its board voted Tuesday to grant the sales and mortgage-recording tax exemptions Midtown sought. 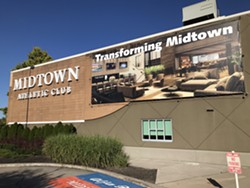 “Thank you very much,” the agency’s chairwoman, Ann Burr, said to William and his lawyer after the vote. “Continued success to you.”

The meeting was held at noon at Ogden Town Hall, about 15 miles west of the club on East Highland Drive in Rochester, where members have access to 18 tennis courts, an outdoor swimming pool, a spa, a restaurant, and boutique befitting a high-end fitness facility.

The planned expansion will bring more over the next three years, namely a seven-lane, 25-yard indoor pool; an indoor turf field; new fitness studios for cycling, cross-training, and boxing, and a new lobby.

After the vote, William acknowledged that Midtown would have proceeded with a “scaled-back” version of the project had the board rejected the application for tax breaks.

“We might have had to consider not building that pool,” he said. “We’re talking about a considerable amount of money.”

In other words, county taxpayers are subsidizing “a considerable amount of money” for affluent members of a luxury gym to have an indoor pool.

Imagine Monroe, whose board rarely turns down a request for a handout, cited the 20 full-time jobs and 10 part-time jobs Midtown anticipated the project would generate.

What no one on the board asked was how many of those jobs would have been realized had Midtown moved forward with a scaled-back version of its expansion wholly on its own dime.

Construction of an indoor pool alone doesn’t account for those 30 jobs. So, how many jobs are county taxpayers really getting for their investment? No one will ever really know.

Imagine Monroe highlighted a benefit-to-incentive ratio for the project of 14-to-1, an assessment it derived from using an online cost-analysis tool developed by the Center for Governmental Research, a Rochester public policy think tank.

But factored into that assessment were all the jobs that would have been created anyway had Midtown been forced to scale back.

Also noteworthy is that CGR’s chief economist, Kent Gardner, has said he objected to Imagine Monroe’s use of the tool and its conclusions in this case.

“It’s not the job of taxpayers to make sure that Midtown Athletic Club survives and thrives and is competitive in the market,” said Rachel Barnhart, a Democratic candidate for the Monroe County Legislature who is expected to be appointed to a seat in the coming days and raised concerns about the Midtown tax breaks last week.

Asked about such criticism after the vote by a reporter, William replied, “Let’s face it. The funds are available and we qualified for the funds. Wouldn’t I be foolish not to apply for the funds?”

Criticism of these tax breaks is not with Midtown, but with Imagine Monroe. Its board has great discretion when it comes to offering assistance from beleaguered taxpayers, and a decision like this leaves one to wonder what degree of discretion is being exercised.

Midtown’s application passed the board by a vote of 4-to-1.

One Midtown member, Steven Sanow, made the trek to Ogden for the meeting. He was distressed about the public financing his club’s expansion.

“This is a Ritz-Carlton club, and I think they’ve misjudged the demographic here,” he said. “People can’t afford it.”

“It’s not for everyone,” he added later, “so why in the world would everyone be paying for something that isn’t for them?”