33. Spend some time at the theater 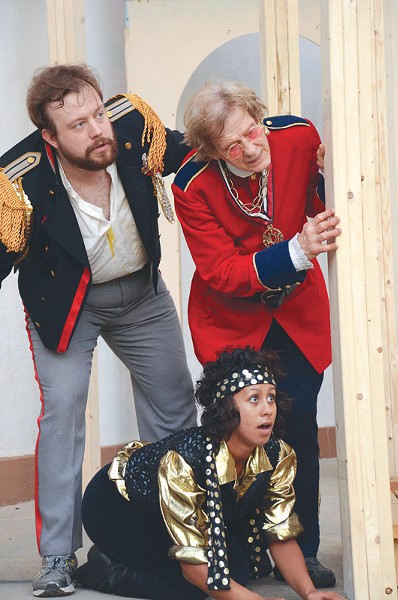 PHOTO PROVIDED Cast members in the Shakespeare Players' July 2013 production of "Twelfth Night." The company will present "A Midsummer Night's Dream" at Highland Park the first two weeks of July.

Joseph Papp started it all in 1954: the first big-city, outdoor Shakespeare performances of note. The New York Shakespeare Festival grew into an essential component of a Manhattan summer and an entertainment empire in its own right, throwing off everything from CBS-TV productions of Shakespeare in the early 70's to hit Broadway musicals like "A Chorus Line" and "The Mystery of Edwin Drood."

In its nearly two decades, the Shakespeare Players (teamed up with the Monroe County Parks Department) have worked through a good chunk of the Bard's output, concentrating on the more popular plays. Last year's was "Twelfth Night"; this summer it is another of Shakespeare's most popular comedies: "A Midsummer Night's Dream", to be performed the first two weeks of July in this appropriately vernal setting.

This production should be a unique one. The production is being directed by Luanne Davis Haggerty, a staff member in the theater department of the National Technical Institute for the Deaf, and is double cast, with a voicing actor and a signing (American Sign Language) actor assigned to every role, including the fairies, who sign among themselves with their lines voiced by other actors. This is standard performing procedure for deaf theater like NTID, of course, but it seems to be first for a production by a "regular" Shakespeare company, according to Shakespeare Players director Peter Scribner.

Upstate New York also is home to other summer Shakespeare performances. The Syracuse Shakespeare Festival offers "Measure for Measure" in June and "Twelfth Night" in August (Syrsf.org). Buffalo's Shakespeare in Delaware Park presents "Henry V" from June 19 through July 13 and "The Comedy of Errors" from July 24 through August 17 (Shakespeareindelawarepark.org). At the Endicott Performing Arts Center near Binghamton, you can enjoy a smorgasbord of Shakespearean love scenes playing from August 15 to August 18. They're all outdoors and they're all free (Endicottarts.com).

If you'd like a change from Shakespeare, but hanker for something equally grand, you can also find it in Buffalo, where you can take in Against the Grain Festival's ambitious outdoor production of Goethe's vast drama "Faust", adapted by Neil Wechsler. The great German writer's story of the rise and fall of Western civilization, playing from July 22 to August 3, will be set among the abandoned grain elevators of Buffalo's Silo City and will use performers from Buffalo, Pittsburgh, Chicago, and Toronto (Atgfestival.org)