Michael Hubbard gives tunes for the times at Hartnett Gallery

Michael Hubbard is a skilled painter, but he's also a maker of books, films, and themed mixtapes. Oh, and he's also a feminist. Hubbard's women in music themed show, "Eleven Love Songs," currently exhibited at the University of Rochester's Hartnett Gallery, is a wonderful tribute to fierce female artists and revolutionaries throughout history and around the globe.

It's not like Hubbard took the political temperature recently and decided to paint about it. He's spent years working on this series, which he says "traces the lineage of punk rock feminists, starting with the Riot Grrrl bands of the 1990's and continuing to current movements that bear a similar energy."

Ringing the gallery are a series of oil and watercolor paintings of different performers and other icons as well as portraits of books by women in rock. Hubbard says he's "fascinated by the fierce, youthful, anti-establishment rage" of the women he portrays. Bikini Kill's Kathleen Hanna, Bratmobile and Partyline's Allison Wolfe, Harriet Tubman, and the women of Pussy Riot are among the featured faces.

"They're righteous and strong, and the artwork is filled with sincere respect," Hubbard says. 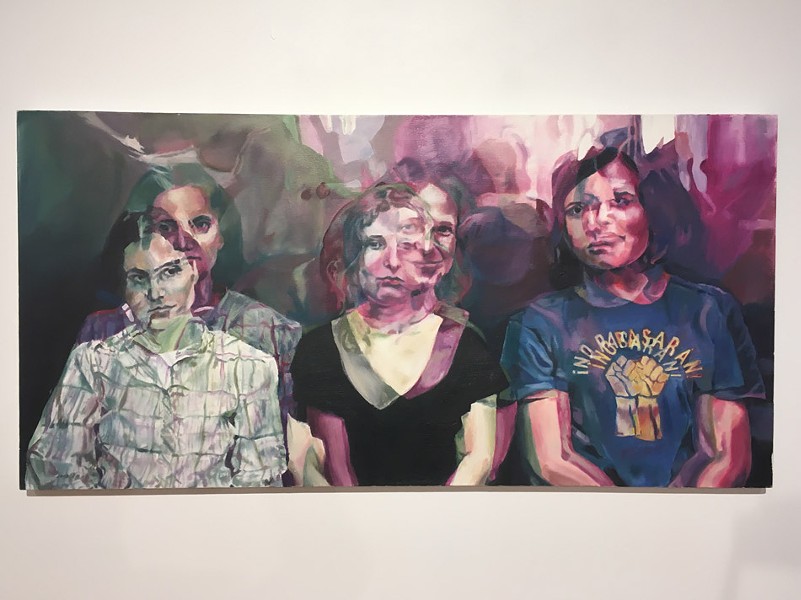 The shifting style gives the impression of watching each subject move in what Hubbard calls "an expanded photographic moment," which makes looking difficult. He's intentionally embedded into the work subtle commentary about women as a consumable product.

"The paintings resist a viewer's gaze," he says. By demanding a deeper look, Hubbard aims to acknowledge "the complexity and inscrutability" of his subjects, he says.

On a long table in the center of the room is Hubbard's handmade book, "Eleven Love Songs," which is folded out and stands upright for easy viewing. Within its pages are paintings of 11 historic women -- artists, warriors, vandals, and activists from around the world -- each paired with a poem Hubbard arranged using phrases he pulled from books written by Taslima Nasrin and Maya Angelou, and songs by Blondie, PJ Harvey, The Smiths, and others.

And in one corner of the space, Hubbard presents his Mixtape Project: a listening station with a set of mixtapes, each one featuring a sequence of songs that "loosely illustrates the life of a revolutionary woman from history," he says. These include British warrior queen Boudica; Italian Baroque painter Artemisia Gentileschi; and Sampat Pal Devi, a 21st century activist for women's rights in rural India.

Hubbard carefully curated each tape with Riot Grrrl bands, other all-female punk groups, as well as songs from a range of decades and genres. It's rather beautiful to hear the spirit of these women reverberating through modern female voices. Hubbard has made the playlists from each tape available on Spotify as well.

You can view the show through February 19, and check out more of Michael Hubbard's work at michaelhubbard.com. 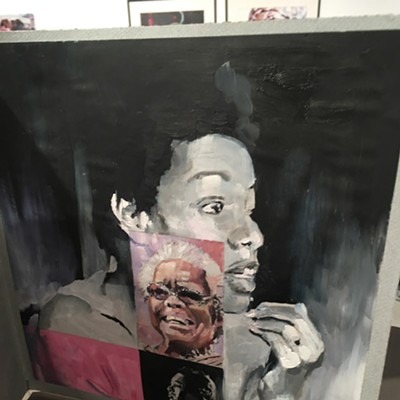