A lot has changed for mewithoutYou since forming 20 years ago, but the Philadelphia post-hardcore band has always defied neat explanation.

mewithoutYou no longer tours in a bus that ran on vegetable oil collected from restaurant dumpsters. The soft-spoken but still-vocal frontman Aaron Weiss seems more reluctant to speak from the stage against the hypocritical materialism of the Evangelical church, and no longer sermonizes about Jesus at the now-defunct Cornerstone Festival, as he did in the mid-2000s. And of course, Weiss is no longer in his early 20’s.

The quintet is anchored by Aaron Weiss and two other founding members: Rick Mazzota is still a ferocious Tasmanian devil of a drummer; guitarist Mike Weiss, Aaron’s brother, is still churning out angst-ridden but melodic riffs. And over top of the din, Aaron is still screaming existential poetry that draws Christian, Jewish, and Muslim faith traditions into one spiritual saga of seeking.

As mewithoutYou enters 2020, the final year of its existence before it amicably disbands for life’s next chapters, Aaron Weiss hopes he’s changed from the person he was when the band began. “I had either a presumption that I had discovered certain answers or an expectation that I would discover them,” he says, “and I needed to know things or understand things. And that’s become less and less over time, to the point where I’ve even found some of those so-called understandings to be a hindrance in my progress in that path.” 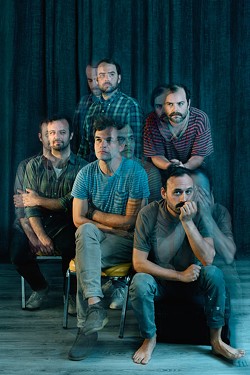 A consistent element throughout mewithoutYou’s seven-album discography is a palpable level of unease and discomfort, particularly when it comes to matters of faith and doubt. “I have more peace when I don’t carry around this big rolodex of answers,” Aaron says. But what he calls his “obsession with God, or questions of morality, Truth” has been a constant.

Speaking over the phone from somewhere in Idaho, where he was caulking a bookshelf in a tiny house he’s built for his wife and children, Aaron Weiss speaks freely about hope and gaining new perspective. “In order to make room for what’s new, I have to let go of what’s old,” he says. “And so it’s this constant dying and rebirth, or a constant sort of emptying out, in hopes of being refilled with something fresh or deeper or fuller.”

These words echo the sentiment of the chorus in “Paper Hanger,” from mewithoutYou’s 2004 sophomore album “Catch for Us the Foxes” — an enduring, still explosive exemplar of the band’s signature style: “I was dead, then alive/ She was like wine turned to water then turned back to wine/ You can pour us out, we won't mind/ A scratch around the mouth of the glass/ My life is no longer mine.”

The overt spiritual imagery in mewithoutYou’s music isn’t surprising when you consider Mike and Aaron Weiss’s eclectic religious upbringing. The two brothers were born to an Episcopalian mother and a Jewish father, who had both converted to Sufism, a form of Islamic mysticism. But while Mike says his background helped him to “keep an open mind,” spirituality doesn’t enter into the music-making equation for him, as it does for Aaron, the band’s lyricist. "When I’m creating the music,” Mike says. “I’m not thinking about God or, I’m not inspired by my faith, or anything like that.”

And after more than 20 years of making music together, Aaron’s vocal approach to the songs — whether he’s yelling, singing, or screaming — still surprises Mike. “Regardless of what my expectations were, his talent usually comes in and makes it great,” Mike says of his brother. “I don’t ever feel disappointed at the end of the day, when I’ve had time to really digest what the song is. The process of unlearning what I thought it was is definitely real, because we spend so much time with the instrumentals before they have vocals on them.”

In addition to “Catch for Us the Foxes” and the band’s subsequent album “Brother, Sister,” Mike Weiss cites the band’s two most recent full-length records, “Pale Horses” and “[Untitled],” as containing that identifiable mewithoutYou guitar sound. When Aaron is asked which of the band’s songs he is proudest of, he points to “[Untitled]” and its related EP of the same name, “which are so much fresher to me and came out of a place that’s closer to where I am now,” he says.

Despite’s Aaron’s connection to the “[Untitled]” songs — what will likely constitute the band’s last newly recorded output — the music he writes and the music he enjoys listening to are two very different things.

“I don’t listen to our music, to put it plainly,” he says, “and I don’t listen to music that sounds like our music.” Far from the world of hardcore and rock, he inherited his father’s taste in the music of Bob Dylan and Simon & Garfunkel. Aaron went on to listen to indie acts such as The Smiths, Neutral Milk Hotel, Joanna Newsom, Sufjan Stevens, and Will Oldham.

Looking ahead to life after mewithoutYou, Mike Weiss is unsure what he’ll do next, but he knows he wants to continue with music in some way. “What makes me feel most like myself is definitely playing the guitar,” he says, “and I feel most comfortable in that space and creating and performing, or just sharing or talking about music.” 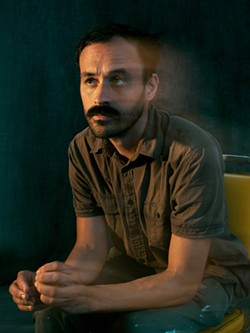 Aaron Weiss, who has a doctoral degree from Temple University in urban education and completed his dissertation on Islamic education, is looking to get back into academia, ideally to teach at a university. “That happens to be a time in my life that I felt very alive and very fulfilled,” he says, “was when I was living basically a solitary life — researching, reading, writing.”

“Actually, I should even mention it now,” he says, “if anybody knows of a college of education looking to hire somebody, we are open to traveling.”

In addition to its forthcoming winter tour — playing in support of Thrice and the 15th anniversary of its album “Vheissu” — mewithoutYou will embark on a spring tour, playing “Brother, Sister” at shows in its entirety, before an official farewell tour in the fall.

Aaron Weiss says he had always wanted mewithoutYou to achieve some kind of moral transcendence. That goal still exists, but not as he had originally thought.

“Rather than wanting us to be unified around some religious ideas or some moral lifestyle or teachings,” Aaron says. “I’ve come to realize it would be sufficient if I would get my own life in order: if I would get my own heart straight, if I would clear out my mind from all the judgmental thoughts I have about the other guys in the band or people who come to talk after the shows, or my own impatience and my own dissatisfaction.”

“I spent so many years trying to get the other guys in the group to catch fire with what has been lit within me, to share the vision that I’ve been shown, or that seems so clear to me about a different, more radical, or more beautiful way to live than the standard patterns of the world, so to speak,” he says. “But I’ve given up on that. At least, I’m trying very much to give up on the urge to try to convert others — even within my own group — to convert others to my way of seeing or being, and rather allow myself to be converted to accepting everybody as they are.”