Big changes at The Metropolitan building continue with the opening of Bar Bantam in the building's newly renovated lobby. The restaurant, which opened February 1, serves breakfast, lunch, and aperitivo (happy hour), with plans to add a full dinner service in April.

In designing the restaurant, the Bar Bantam partners and architect Mauro Cringoli were keen to create a "space within a space" that was visually striking and distinct, but also at harmony with the rest of the tower, Cerankosky says, adding that "The building has a classic structure and grace that needs to be complemented."

The restaurant consists of an eye-catching central structure that houses the bar and kitchen, with tables surrounding it on three sides. It's set to one side of the Metropolitan's recently-renovated lobby, where you can look down to the concourse level below and up to the second floor.

With its streamlined menu, carryout service, and casual vibe, Bar Bantam is intended to accommodate quick business lunches for downtown workers on tight schedules, says General Manager Kris Klinkbeil Jr. Though Bar Bantam's primary audience is the community living and working inside The Metropolitan, Klinkbeil anticipates substantial foot traffic from neighboring businesses. The Clinton Square building directly across the street connects to the Metropolitan via an underground tunnel — a convenient option for those who don't want don an overcoat to nip out for lunch.

If you're not hurrying to your next meeting, Bar Bantam has comfortable seating and a wide, welcoming bar that will make you want to linger. When I visited Bar Bantam on its second day in operation, a few individuals had already staked out tables and were tapping away on laptops, a sandwich to one side. In warmer months, the restaurant will have patio seating.

The menu at Bar Bantam is styled after California cuisine, says Executive Chef Sean O'Donnell, formerly chef de cuisine at Aunt Rosie's and most recently at Next Door by Wegmans. He was contacted about heading up Bar Bantam's kitchen when the restaurant partners noticed his cooking on Instagram. O'Donnell says his challenge was creating a menu that could satisfy the different demographic groups that live and work within The Metropolitan, such as the young, polo-clad techies of data-protection company Datto, and the more traditional, buttoned-up bankers of JP Morgan Chase. To that end, he developed a menu that combines the trends of L.A. with breakfast and lunchtime standards.

The breakfast menu (served from 7 to 11 a.m.) includes egg sandwiches, creative toasts with toppings, and pastries from Village Bakery and Café. French press coffee and espresso-based drinks, sourced from local businesses such as Java's and Glen Edith, are available all day. 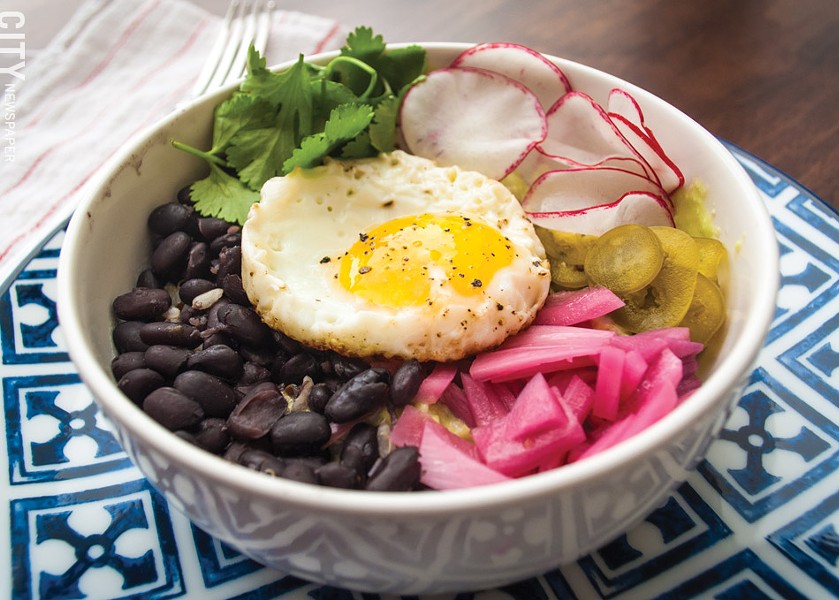 The lunch lineup features vegetable and grain bowls augmented by an optional serving of meat, egg, or avocado. If these colorful, highly Instagrammable mélanges look a little too wholesome for you, deli favorites such as turkey club and roast beef sandwiches are quite at home here too, dressed up with unexpected twists like Romesco sauce and roasted red peppers. O'Donnell adds that the menu is also friendly to vegan and gluten-free diets.

I stopped by for lunch on a recent Thursday around 1 p.m. to find Bar Bantam doing a reasonably steady business. I ordered the cheekily-named "Millennial Mortgage"— presumably a tribute to the now-infamous quote from Australian real estate mogul Tim Gurner, who suggested in a 2017 interview that young adults could afford to buy property provided they rein in their discretionary spending on items such as avocado toast.

Bar Bantam's version is served on a thick slice of sunflower bread and topped with a bright and zesty Baja sauce, pickled onions, cilantro, and sunflower seeds. At $9, it won't completely erase your dreams of homeownership, but for the same price you can get the hulking Forgottaffaletta, a sandwich of capicola, mortadella, sopressata, provolone, and peppers. O'Donnell says the name is a portmanteau of "forgot" and "muffaletta," and was conceived as the sandwich you order when you've forgotten your lunch at home.

"It's not only huge, it's the fastest order," O'Donnell says, explaining that the meaty sandwich is pressed overnight in hotel pans under heavy cans of tomato sauce, so it's ready to go when you order. The sandwich is also listed on the breakfast menu.

Bar Bantam stops serving lunch at 3 p.m., but aperitivo (from 3 to 8 p.m.) features bar snacks as well as cocktails, wine, and beer. Devotees of the bar programs at Good Luck and Cure will appreciate house creations such as the Bees for Breakfast (rum, dry vermouth, lemon, honey syrup, and absinthe) or the No More Parties in L.A. (Grand Poppy amaro, lime, and prosecco).

The breakfast and lunch lineup at Bar Bantam will remain somewhat static, but O'Donnell anticipates a rotating, seasonally-focused menu when Bar Bantam opens for dinner April. For now, it's focused on expanding its lunch service. The restaurant begins taking phone orders for lunch this week and will also start offering catering options in the next several weeks.