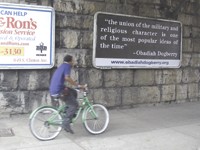 A new public art exhibit is introducing people to a newspaper that encouraged readers to question authority and think for themselves. No, notCity. It's the Liberal Advocate, which, along with The Reflector, was an example of 19th-century "freethought press" published in Rochester and Palmyra by Obediah Dogberry. Never heard of Dogberry? The Obediah Dogberry Society is aiming to change that.

The Society is an informal group headed up by Bleu Cease, a local artist-activist who first learned about Dogberry about a year and a half ago when he read a research paper about him published by the Rochester Public Library. Cease was struck not only by the outlandish name (a pseudonym, actually, employed by Abner Cole) but by Dogberry's wit and forward thinking. Through his publications, Dogberry championed education and the free exchange of information, and frequently questioned the evangelicals that called Palmyra home back in the 1800s. He notably got into trouble by daring to rib Joseph Smith and the Book of Mormon.

Much of Dogberry's work has been lost in time, but through the new multi-venue, multimedia exhibit, Cease is putting the publisher's words back in the public consciousness. You might have seen billboards featuring Dogberry's quotes on Winton Road, Atlantic Avenue, State Street, and other areas in the city. A walking timeline has been installed on South Avenue. A "WWOS (What Would Obediah Say?)" plaque has been put up outside the Visual Studies Workshop on Prince Street (featuring the alternate spelling of "Obadiah" --- he used both). An Obediah Dogberry Society newspaper box sits outside the Reynolds Arcade on Main Street. And several artists have contributed to the exhibit A Collective Portrait of Obediah, now hanging at RoCo.

The far-reaching exhibit was Cease's idea, and he's responsible for putting it together, even going so far as to pay for the various billboards out of pocket (he declined to say how much they cost, just that he "got a great deal"). He has some experience with this type of thing, having created the Propaganda Box, which played political documentaries at various locations around the city during the 2004 presidential election.

The idea "just kind of swelled on me," Cease says after reading about Dogberry. And given some of the publisher's ideas --- "The union of the military and religious character is one of the most popular ideas of the time" appears on one billboard, for instance --- Cease thought that Dogberry's take was appropriate given the state of things.

"Certainly there are potentially those parallels" between what Dogberry railed against in his time and what's currently going on in the world, Cease says. "And that's the idea of asking such a blatant question: What would Obediah say? That approach to engaging with history is a direct question as opposed to engaging history in an objective, removed way.... We're looking to engage it in a way that will trigger someone to raise a question and do some more research and jar someone's mind a little bit."

Most of the exhibit pieces will be up until September 10; visit www.obediahdogberry.org for a map or more information.

City officials want to lease the River Street train depot at 490 River Street to Mark IV for conversion into a "76-seat white table cloth restaurant with a bistro atmosphere and bar seating for 25," wrote Mayor Bob Duffy in his proposal to City Council. Mark IV and the DiMarzo Group would foot the cost of the project --- around $260,000 --- and then sublease the depot to a restaurant owner.

If the proposal is approved by City Council's Parks, Public Works, and the Environment Committee at its August 17 meeting, it is expected to be on the agenda of the August 22 Council meeting.

Other applicants for the site were representatives from Pelican's Nest Restaurant and Mario's Via Abruzzi Restaurant, as well as Gibbs Marine Group for boating services. Mark IV was selected because it did not have any contingency issues.

Renovations would begin later this month or early next, with a projected December opening.

For a while, it looked as if a three-month curfew for children 17 and under was a sure thing. But when city councilmembers met in special session last week to vote on it, they held the item in committee, pending further review. Councilmember Adam McFadden, who has been researching curfews for a couple of years, says that measure could still pass sometime this month.

McFadden says his primary concern is ensuring that the curfew doesn't become a way of harassing urban youth.

Under the current proposal, police could pick up youths violating the curfew and take them to a center operated by the Hillside Family of Agencies. There, the youths would be screened for possible disturbances at home and other problems. If caseworkers found nothing amiss, parents or guardians could take their children home. Hillside would also provide transportation for children who needed it.

McFadden's ideal is to replicate the curfew system in Minneapolis. That program, he says, is funded by the city, county, and school district. Rochester city school district officials and county representatives have expressed their support of the curfew, says McFadden, but the three parties are "nowhere near" reaching an agreement on how to operate it together. The three-month pilot would cost the city about $62,000.

Charles Reaves, commissioner of the Department of Parks, Recreation & Human Services and the man who would oversee the curfew, says the city is working with school district officials to create identification cards noting a child's year of birth. If the trial curfew passes within the next few weeks, however, there won't be enough time to create a comprehensive identification system. Police officers, says Reaves, will just have to ask children their age and address.

The pilot program, Reaves stresses, would be a test run, enabling city officials to make changes before adopting it as a more permanent program.

Unless something changes, the only debate between the two Democratic candidates for governor was held last month, in New York City.

Plenty of people would have liked to have seen more, and underdog Tom Suozzi, is capitalizing on that frustration. He's taking his pitch for more debates to cities across Upstate New York in hopes of gaining the public's support --- at least for more debates, if not his candidacy.

In Rochester last week, Suozzi made just such an appeal. He and his opponent, the heavily favored Attorney General Eliot Spitzer, were both invited to a dozen or so debates, including one to have been hosted this week by WXXI and the D&C's Voice of the Voter project.

"We are still working on proposals and sorting out dates," Spitzer spokesperson Christine Anderson told City Newspaper. "Following the first debate, Eliot has already agreed to debate his primary opponent again August 30." (Suozzi's camp chafes at calling that event a debate since the candidates will be in different cities and won't debate each other directly.)

It's typical for incumbents and heavy favorites to decline debates; there's often little to be gained and a lot at risk. Conversely, for insurgents like Suozzi, there's nothing to lose, whether it's in debating Spitzer or calling him out for refusing to debate.

Here last week, Suozzi said Spitzer is "saying 'no' to the people of Rochester and Upstate New York."

Language like that is easily ignored as campaign bluster, but Suozzi does strike a chord when he presses his rival to deliver on policy issues.

"Eliot Spitzer has no specifics; he's not been held accountable," says Suozzi. That's a bit of an exaggeration. Spitzer has come out with some policy statements. But the AG has also earned a reputation for being coy with reporters, at times refusing to answer direct questions on certain issues (see "Eliot Spitzer, New York's man of mystery," July 5).

Coupled with his decision --- at least so far --- not to accept any other debates, that's played into Suozzi's hands. It's a gift the Nassau County Executive hasn't passed up.

"We can't expect an unaccountable candidate to be an accountable governor," he told Rochester reporters last week.

If Congressman Randy Kuhl thought he could make headway against his Democratic candidate Eric Massa by raising the war in Iraq, maybe he should have thought again. At least, that's what Massa's campaign is saying. 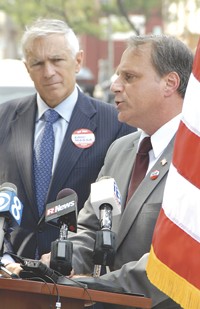 Kuhl is completing his first term representing the 29th district, which runs from Rochester's southern suburbs to the Southern Tier. And he's just returned from a congressional trip to Iraq. The Massa camp views the trip as an attempt to make the war a major issue.

"We welcome that," says Massa.

Massa's a retired Navy officer, with 24 years of active duty in places like Beirut (the last time around), Kuwait, and the Balkans. And he brought his former boss to Rochester to stump for him on the eve of Kuhl's return from the Middle East. That boss? General Wesley Clark.

Clark appeared with Massa at a campaign press conference in front of the Veterans' OutreachCenter. But he also criticized some of the Bush administration's policies that affect veterans.

"The VA has been consistently under-funded," Clark said, adding: "There are problems in the VA that we haven't even begun to address." Chief among these, he said, is the department's lack of preparedness to help vets cop with Post Traumatic Stress Disorder.

All the talk of struggles veterans face, like PTSD, eventually came around again to the subject of Massa's campaign.

"He's seen the consequences of combat," said Clark. "He's not going to be a phony patriot, wearing a flag symbol and cutting benefits to vets."

The Kuhl-Massa race recently cracked the ranks of the National Journal's 50 most competitive races in the House of Representatives, at 47th by mid-July.