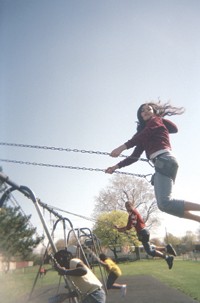 A black girl in a white dress stands against a brick wall. Her head's tilted slightly sideways. She's smiling. Jahree Harmon, 10, can't explain why he shot the picture the way he did --- why he picked this wall, this girl, this pose. He shrugs his shoulders. "I don't know. I just took it," he says.

If Jahree and his classmates in the School 17 photo club struggle to express what their photos mean, the photos do seem to express something about the photographers. Harmon likes portraits. Eleven-year-old Idalis Miranda prefers nature scenes. In one shot, her camera is aimed upward; the sun filters through the trees. The leaves light up, whether from the camera flash or natural light is not clear. In photo club, she says, she learned how to use shadows to create special effects. One way to do this, she says, is to "put something on a piece of paper for a really long time."

Photo club coordinator Rajesh Barnabas, also a youth organizer for Charles Settlement House, says he didn't try to teach the students much about photo technique. Rather, he let them experiment --- sometimes unintentionally. Some of the disposable cameras they used didn't forward properly. "Those produced all these double exposures," he says, pointing to one of Jahree's pictures. A girl in pigtails looks into the camera, her face split by bright lights from the photo underneath.

Not that Jahree minds. That, he says, will go into the photo club display. He's referring to "17 From 17," a display featuring about 17 photographers from School 17. The show will be on display from 7 a.m. to 4 p.m. on weekdays until August 31 at the CharlesHouseSeniorCenter, 71 Parkway. It is free and open to the public.

It's not the type of legislation you'd expect to see someone launch a statewide campaign for.

But that's exactly what Carmella Mantello's doing. The head of the Canal Corporation has hit the road to stump for Governor Pataki's new plan to overhaul how the canal is administered. The plan consists of two parts. First, move the Canal Corporation out from under the aegis of the Thruway Authority (where it's been a department since 1992) and turn it into its own authority. Second, create a greenway than runs the length of the canal. (While there's already a canal trail through large parts of the state, including the Rochester area, it hasn't yet reached all the towns along the canal's length.)

Before being appointed by Pataki to lead the Canal Corporation, Mantello was executive director of the Hudson River Valley Greenway. That greenway helped spur the economic growth now taking place in that region of the state, she told a crowd of government and community leaders at an information meeting in Greece last week. And, she said, it could do the same here.

"The Erie Canal Greenway can be an economic boost for upstate New York," she said. If the plan goes ahead, the canal trail would link up with other greenways, like the one in the Hudson Valley and smaller local ones like the Genesee Valley Greenway, to make a statewide trail network called the Empire State Greenway.

According to Mantello, businesses along the canal already see about $380 million in revenues. It costs the state $80 million to maintain the canal, yet user fees and other canal-based revenue sources bring in only a little over a million dollars each year.

"We will never pay for our self," she says. That means if no changes are made to the current system, the maintenance of the canal's infrastructure will continue to be subsidized by the Thruway Authority's tolls.

That's not something the Thruway Authority is happy about. Mantello recalls a meeting where one authority board members growled "fill the ditch in," when the topic of the canal was broached.

"That's the heart of this," Mantello explains. "Our missions are distinct."

So far, the plan has seen tepid opposition from the state's Democrats. Assemblyman (and former attorney general candidate) Richard Brodsky has said he'd prefer to see the state reform its system of authorities before creating any more. (A few years ago the Canal Corporation was involved a scandal, after development rights on its lands were sold to a private developer for $30,000; the deal was cancelled after it became public. For reform advocates, that incident has become something of a poster child for what's wrong with the state's system of authorities.)

Closer to home, David Gantt has expressed reservations about removing the Canal Corporation from the source of funding it now has in the Thruway Authority. Under Pataki's plan, funding would come out of the general fund, that is, money directly raised through taxes, rather than tolls or another type of fee.

One of the attendees at last week's meeting raised that issue, and Mantello had an answer. Sort of.

"Taxes are not going to increase because of the canal going under the general fund," Mantello said. "Think about it. We already pay for the state parks."

Rochester's newest summer event series, Polapalooza, begins next week, and promoter Jeff Springut is billing it as a European-style street festival. The weekly event will take place at the Liberty Pole downtown on Wednesdays through July 26, from 5 to 11 p.m. There'll be sidewalk cafés, visual artists, and an eclectic line-up of international musicians.

Things kick off June 28 with the Austin, Texas, hyper-rhythmic Latin dance band GrupoFantasma. Other acts listed so far: Cuban-world beat party-out-of-bounds band Babaloo with LouLou from The Thievery Corporation on July 5; Senegalese tasso group Daara J (tasso's an early form of rap) on July 12, and a group that is more circus than band, Brazil's CyroBaptista and Beat the Donkey on July 19. Info: www.thelibertypole.com

SEE YOU IN COURT

If everything had gone according to plan, it'd be over by now.

When the county sued its municipalities in state Supreme Court, it asked for a decision by the end of May. The lawsuit revolves around whether MonroeCounty can legally participate in the state's new Medicaid funding option. In that option --- known as an "intercept" --- counties let the state take a cut of their sales-tax receipts and in exchange, the state pays the counties' share of the Medicaid bill. But MonroeCounty's situation is unique. It gives a specific percentage of its sales tax to the City of Rochester, towns, villages, and suburban school districts. Some critics say that prevents the county from opting into the intercept plan. The county's suit is aimed at settling that issue.

If the county gives up part of its revenue without replacing it, the municipalities will get shortchanged. To avoid that, County Executive Maggie Brooks wants to raise the county's sales tax by three-quarters of a percent. But she has to have the state legislature's permission to raise the tax, and local Assembly Democrats have opposed the hike, saying it will hurt poor and low-income residents.

Brooks had hoped to get a court decision on the intercept issue by the end of May, so she could get her tax-increase request to the legislature before its session ended. That's not going to happen now: the session ends Thursday, and the court's decision, originally due out last week, won't be rendered until Friday.

That doesn't mean Maggie Brooks' budget plan is ruined, though. The state legislature often calls special sessions during the summer to address local issues like this one --- provided the interested parties can make the case to their local delegation. If there've been negotiations between the Republican Brooks administration and the Democratic Assembly delegation, however, they've been in private. Publicly, there's been little more than scattered sniping on both sides.

Friday's court decision will let everyone know where they stand on the intercept issue, but that doesn't mean both sides can reach an agreement on raising the sales tax.

The start of training camp is still roughly four months away, but the competition for roster spots is already intensifying for the defending American Basketball Association champion Rochester RazorSharks.

While the team has asked all the members of the 2005-06 squad to return and all of them have expressed interest in coming back, the team is also heavily recruiting outside talent from across the country. Coach Rod Baker has spent much of the off-season at various pre-draft camps, and the team has hired Chicago-based recruiter Otis Hailey to augment the search.

And last Saturday, the team held an open tryout at St. JohnFisherCollege for anyone who paid the registration fee of $100 (or $125 day-of). In all, 10 hopefuls came from as far away as New York City. They ranged in age from early-20s to mid-30s, and they brought varying levels of experience. Some had played Division I college ball; others had played little more than pick-up games. But they all had the same hope: to be the one player invited to attend the team's camp in October.

During the tryout Baker worked the hopefuls through a couple of hours of various skill drills, then watched them play a full-court, fully officiated scrimmage. At times Baker sat on the bleachers at Fisher's hot and stuffy Varsity Gym and silently eyed the action; other times, he paced the sidelines and exhorted the players. When one hopeful bricked two free throws, Baker couldn't resist commenting: "I can fix that for you, you know."

On Monday, the team announced that Baker had selected not one but two of the players to return in October for training camp: former Roberts Wesleyan star and Perry native Joe Rebisz and Edison Tech grad Marvin Phillips, who played collegiate ball at Potsdam State and Fisher. But even with the invitation to camp, there's no guarantee either of them will make the team's final 2006-07 roster: their ultimate fate will be decided come fall.