Mary and Stuart McCarty haven't used pesticides in their flower and vegetable gardens for years. Nonetheless, the gardens are lush and colorful: with rhododendron, dogwoods, iris, rhubarb, tomatoes, and beans.

"We don't use any chemicals, because they harm the birds," says Stuart McCarty. "We love watching the wildlife and we want to protect them, not harm them with that stuff. And if there are weeds, we just pull them out."

On Saturday, June 17, Rochester Against the Misuse of Pesticides is sponsoring a tour of six gardens that are owner-maintained and pesticide free. The tour runs from 10 a.m. to 2 p.m.

"We've been providing the public with information about how easy it is to create safe, pesticide and herbicide-free gardens for years," says Judy Braiman, a spokesperson for RAMP. "Now we have a chance to show what other people have done so they can get ideas."

The gardens are at both city and suburban homes, and they represent a variety of landscaping, from formal to free-style. Joseph deVita's city garden near Oxford Street and Monroe Avenue shows what can be done with a small lot that has both sun and shade. "Of course there are bugs," he says. "There are supposed to be, but the birds take care of them. We've lived here for 18 years and we've never used any chemicals, because we've always been concerned for our pets."

Braiman cautions gardeners against using commercial fertilizers and planting mixes and suggests using their own compost instead. "We've seen that these commercial products often contain high amounts of heavy metals and chemicals that come right from the animal by-product," she says. "Chicken manure is often high in arsenic because chickens are often fed arsenic, so it wouldn't be good for a vegetable garden."

RAMP's garden tour tickets are $12 in advance, $8 for seniors and $15 on the day of the tour. They can be purchased at Parkleigh, 215 Park Avenue, or by calling 383-1317. The tickets will contain a tour map with names and addresses of tour hosts.

Developer Fred Rinaldi is back with another proposal to tear down the old Monroe movie theater, now the home of adult-entertainment business Show World. Rinaldi has submitted plans to the city that call for demolishing the theater, the apartment building at the corner of Monroe and South Goodman Street, and two houses on Amherst Street.

But Rochester Zoning Director Art Ientilucci says its unlikely that the city will approve the proposal. "In every way the plan is deficient," he says. "The façade design is very poor in relation to the streets. The orientation of the building is poor in relation to the street. There's too much parking. It's detrimental to the Amherst Street frontage. It's detrimental to development along Monroe Avenue ...." Ientilucci takes a breath. "Unfortunately there's not much merit to this plan."

About seven years ago, recalls former Southeast Area Coalition leader Mary Wells, Rinaldi submitted a similar plan. At that time, however, Rinaldi proposed both a Rite Aid and a Wendy's restaurant on the site. This time, the fast food restaurant has been replaced with a larger Rite Aid, with a drive-through. After the city rejected his initial plan, Rinaldi proposed keeping the theater intact and putting the Rite Aid inside it, says Wells. But even that plan seriously deviated from the city's design standards, says Ientilucci.

As for the current plan: Rite Aid can apply for variances --- a potentially huge task --- or go back to the drawing board, Ientilucci says.

Rinaldi did not respond to requests for an interview.

William Pope.L has crawled his way to the top of the New York City performance-art scene. Pope.L --- who uses a variation of his parents' names as his surname --- began crawling in the late 70's as a way to bring attention to the increasing number of homeless people he was seeing on city streets, many of whom were lying on the sidewalks.

Pope.L joined them. Crawling on his hands and knees of Manhattan's busiest streets, he drew a range of responses from bystanders: sympathy, cups of water, offers of help, frustration, ridicule, anger. His "Great White Way," which has been favorably reviewed in national publications, is a work in progress that is taking him from the Statue of Liberty to Broadway.

A recipient of three National Endowment of the Arts awards, Pope.L is a 2005 Guggenheim fellow and a professor at BatesCollege. And in 2004, he created Black Factory, premiering at the Massachusetts Museum of Contemporary Art. An offshoot of his solo crawls, Black Factory is a "mobile social experiment" that requires community participation. A three-person troupe arrives in town, visits neighborhoods, and stops people on the street to engage them in a dialogue about race in America. As with the crawls, people respond differently. Over the course of the four-hour performance, some debate, some laugh, and some just keep walking.

Black Factory will be in Rochester on Monday, June 19, from 1 to 5 p.m., at Visual Studies Workshop, 31 Prince Street.

"The Black Factory is a conversation piece on wheels," says Alisia Chase, assistant professor at SUNY Brockport. "The cast have already learned some of the things about the community they are visiting that are important to people. Here they may talk about job loss or the high murder rate."

Chase and her SUNY Brockport colleague Kitty Hubbard were determined to bring Black Factory to Rochester. "It's difficult sometimes to find artists who captivate my 18 to 22-year-old students," she says. "It's hard finding work that they will relate to and still challenge them."

A design charrette five years ago pushed forward the long-awaited Brooks Landing project --- which will eventually include a café, hotel, and restaurant at the Brooks Avenue-Genesee Street intersection. Now, residents of the Thurston Road area hope to spur similar growth along their commercial strip.

About 50 area residents, merchants, and others met at EbenezerBaptistChurch on Thurston Road last week to conduct an analysis of the area. They divided into small groups and discussed the strengths, weaknesses, and opportunities of the nine-block stretch between Ravenwood and Brooks Avenues.

Funded by the Rochester Area Community Foundation, the event kicked off a familiar process: the charrette. Visioning, explained the city's deputy economic development commissioner, Phil Banks, is the first step in a four-step process. Next, the city will conduct an economic analysis of the area, followed by the design charrette itself, and then an action plan.

While the process can take years, it helps to create a shared image for the area, which many agree is lacking. "If you drive through, you really can't tell if it's on its way up or it's on its way down," said Tony Clark, a Thurston Road merchant and property owner.

Thurston houses more than 50 businesses and has about a 16 percent vacancy rate --- similar to many area malls, said Sector 4 Community Development Small Business Manager John DeMott. The area is also home to almost 40,000 residents and is intersected by five different bus lines. The biggest challenge, says DeMott, is convincing local residents to shop in the area.

While worried about drug activity and absentee landlords, residents also expressed hope that Thurston Road could create a unique identity for itself. "We probably are the perfect urban village," said Josanne Reaves, a 19th Ward resident and executive director of Leadership Rochester. Unique to the 19th Ward, she said, is its large number of parks, sidewalks, and families with young children.

To learn more about the event or to get involved, call the Sector 4 Community Development Corporation, 328-5750. 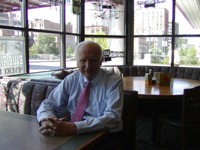 Rochester, says William H. Hudnut, III, has "bottomed out." And that, he adds, is a good thing.

Hudnut is a senior fellow with the Urban Land Institute --- a Washington D.C.-based research group that studies land use --- the former mayor of Indianapolis, and a former Rochesterian. In the area last week to speak at NeighborWorks Rochester's annual luncheon, Hudnut talked with City about what Rochester could do to turn itself into a thriving urban center. We are sitting in Bennigan's Grill and Tavern overlooking East Main Street. Hudnut says he remembers when this street really was Main Street.

Just out of sight is MidtownPlaza. "If it's failing, why keep it?" Hudnut asks. While not directly involved with the Urban Land Institute's analysis of Rochester's downtown, Hudnut's thinking squares with that of his colleagues. In addition to supporting their recommendation to demolish Midtown (except for the tower), Hudnut agrees with ULI analysts that Rochester can sustain 5,000 to 7,000 new downtown housing units.

In the five years since he last visited the area, Hudnut says, Rochester officials have not done enough to promote downtown development. Neighborhoods, though, seem to be making a comeback, says Hudnut, who drove around some of Rochester's hot and not-so-hot spots prior to his talk. "I can see positive changes like in the Swillburg neighborhood compared to several years ago," he says.

But Hudnut, a strong proponent of regionalism, thinks poor cooperation between the city and surrounding municipalities is one of the biggest impediments to growth. "You can't be a suburb of nothing," he says. "You need to have a downtown that is vital or revitalized to make it work." While he says he understands that both the city and county have financial problems, he says that certain measures, such as integrating the area's police forces or purchasing operations, could save money.

And he hesitates to endorse the city's recent proposal to take over control of Durand Eastman beach from the county. "I bet you a lot of people that use that beach are not city residents," he says. "They're county residents. The county, I think, has the moral responsibility to help with these recreational activities."

What area leaders need to do, says Hudnut, is create discussion groups where people can air concerns and discuss solutions. He points to the adoption of "Unigov" in Indianapolis, a form of metropolitan government which merged some of that area's government departments and services.

Rochester should also avoid certain pitfalls, namely thinking too big, says Hudnut. "I think you have to begin small and not look for the big hit," he says. Thinking small for Hudnut means, among other things, supporting small business initiatives and demolishing vacant houses. And Rochester, he says, should start by revitalizing its center city. "Cities die from the inside out, not the outside in," he says. "So it's important, I think, to begin at the inside."