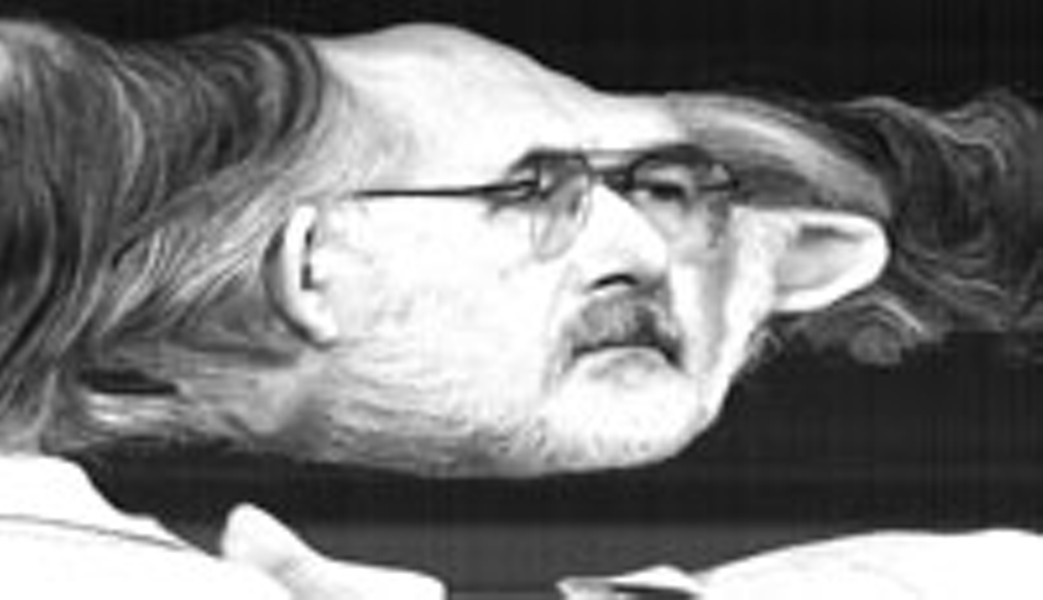 Send me a postcard

The image is about 20 years old, but the distribution method is much newer. | About a month ago, Professor Andrew Davidhazy, chair of RIT's imaging and photographic technology department, decided to make a postcard out of a distorted, nude photograph he took in the '80s. He had been putting his more technical photographs on the department's promotional postcards for years, and decided to publish one of his creative images the same way. | "I chose an image that, among my distorted photographs, it's one of my favorites," he says. "I sent it out, and lo and behold a couple of weeks later I get these two packages, 2000 cards. I said, 'This was a great exercise, but what am I going to do with 2000 postcards?' I hadn't thought of that." | The image is arresting. It's a peripheral photograph taken with a camera Davidhazy made. The subject rotates at the same time that the camera pans from side to side (kind of like rolling an object along a flatbed scanner, he says). The process gives the model a pulled, flattened look. | He admits it's hard to distribute photographs of a distorted nude woman. But he still had a hunch people might want them. So he put a copy of the postcard up on his webpage and sent out an announcement through two photography email lists to a total of about 1100 recipients. | "Then I decided to get cute," Davidhazy says. He posted the announcement to a mailing list dedicated to photographic historians. The subject line read, "Disseminating what may become a historic photograph." The body of the email continued, "Well, you never know." | Davidhazy offered to send a packet of 10 postcards to anyone who sends him an email. He even pays for postage. The requests have come in from all over the United States and from Argentina, Peru, Costa Rica, Belgium, England, and Australia. | "I had somebody from some obscure museum in India writing to me and saying, 'You know, I'd like some of those postcards,'" he says. | There are about 500 postcards left. | "It's very difficult to get feedback on your work that is impartial," he says. "This is very impartial. If they don't like it, they won't ask for it." | See Davidhazy's postcards at www.rit.edu/~andpph/postcards.html.

Planning away the violence

"Finally, the day of reckoning has arrived."

Whom he meant, or what they might be reckoning with, wasn't immediately clear; the plan is a hodgepodge of past and current initiatives cobbled together into a single vision. Johnson himself admits: "There is nothing new in this plan. There is no new thinking."

So why repackage old thinking? A couple of reasons, it turns out.

The first: in the wake of a particularly horrific spate of violence, public outrage has been building to a crescendo. Somebody in a position of leadership had to say something substantial.

But there are good, practical reasons, too. One shortcoming of past programs is their narrow scope.

"What happens is they are almost always targeted to a specific group of people --- those causing the problem," said Johnson. "There will always be another group of people ready to fill the void."

Another problem with anti-violence initiatives is that over time, energy and enthusiasm wane.

"When the crises die down, we think we've solved the problem," said Johnson. Repackaging programs gives them a little oomph.

But for the mayor, the new initiative is more ambitious than that.

"It's now a matter of a long-term commitment," he said.

Easy for him to say. As Johnson pointed out, the announcement came with just 71 days left in his 12-year tenure.

"This isn't something I thought I'd be doing in my last two months in office," he said. And he won't really be doing it. It's designed, he said, both to fit with Councilmember Adam McFadden's "Thou Shalt Not Kill" campaign and to be handed off to the next mayor.

That's one reason the plan is prepared not in the form of legislation for City Council but "for presentation and adoption by the Greater Rochester community."

"It's not for me the outgoing mayor to say what the incoming mayor is to do," Johnson said. "The next budget's going to be his. I think it'll go better coming from him."

(The other reason: "We don't know what it's going to cost.")

So what's in the plan?

What isn't? There are strategies aimed at kids and at adults ranging from marketing campaigns to a Safe Havens network, from establishing Manny Rivera's Children's Zone to creating 500 entry-level jobs.

After his prepared remarks, one of the first questions Johnson faced was from a television reporter who wanted to know why this plan wouldn't meet the same fate as its predecessors. The answer: "We've learned from all those experiences," said Johnson.

You can view the full plan at the city's website, www.cityofrochester.gov (the link to "Mayor's Anti-Violence Plan" is front and center).