If you've longed to hear the soaring arias at New York's Metropolitan Opera but couldn't find the time or money, now's your chance. Through a partnership with three of the country's biggest movie chains, some of the Met's biggest stars are coming to a big screen near you.

Late last month, the Met launched "Metropolitan Opera: Live in HD," a six-part series that broadcasts operas from the Met to movie theaters around the world in high definition. National CineMedia --- which represents theater chains AMC Entertainment, Cinemark, and Regal --- will handle the American broadcasts. And locally, Regal's Eastview branch in Victor is scheduled to show the next opera in the series, Tan Dun's "The First Emperor," starring Placido Domingo, Saturday, January 13, at 1:30 p.m.

The Met's move to the movies is part of new general manager Peter Gelb's initiative to bring opera to a wider audience. "Although nothing is comparable to being at the Met for a live performance, these larger-than-life big-screen transmissions provide an alternative experience for our national and international constituency," Gelb said in a press release. The Met estimates that up to 250,000 people could catch one of the worldwide movie screenings.

The "Live in HD" series began December 30 with Mozart's "The Magic Flute," and 48 of the 60 American theaters that broadcast it (the closest to Rochester was Buffalo) sold out; the Met will re-broadcast it on January 23. The other uppcoming shows are Tchaikovsky's "Eugene Onegin," with Renee Fleming (February 24); Rossini's "Il Barbiere di Siviglia (The Barber of Seville)," with Juan Diego Florez (March 24); and Puccini's "Il Trittico" (April 28). All will be shown at the Eastview Regal except the "Magic Flute" rebroadcast, which will be shown at the Henrietta Regal. Broadcasts are at 1:30 p.m., and tickets cost $18 for adults, $15 for children, and can be bought at the theater box offices. Info: metoperafamily.org.

Kristen Kessler, executive director of Rochester's Mercury Opera, is applauding "Live in HD." "I think it's really cool," she says, "and based on the people I've talked to, I believe there's going to be quite a good reaction to the whole program." Mercury is offering a dinner-show package to go along with March's Barber of Seville. Information: 334-2323.

Meanwhile, if opera at the movies has you craving it in real life, don't forget that Mercury is staging Bellini's Norma January 26-28. Visit operafactory.org for details. 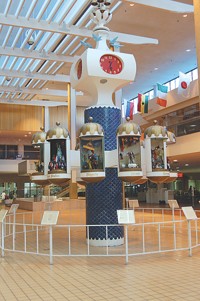 Sometime in the near future, city officials may have to decide whether MidtownPlaza should be torn down. And the pressure for demolition could be strong. A report by Bergmann Associates, hired by the city to assess the Midtown complex, says it'll cost almost three times as much to fix the building as it will to demolish it.

Bergmann was hired for the assessment because city officials are considering buying the complex. The current owner, Blackacre Bridge Capital LLC, has decided to sell Midtown, and city officials want to control its future. But the six-building complex is in bad shape. Much of it, including the mall and the tower, was built in the early 1960's, and it's full of asbestos. There's been very little renovation, the Bergmann study notes, and mechanical and electrical systems "have reached their useful life."

Bergmann estimates that it will cost about $141.2 million to remove the asbestos and bring the complex up to code and contemporary standards. Razing the complex, says the Bergmann study, would cost $54.7 million, including handling the asbestos problems.

If the buildings were torn down, any new use would require new construction, however, and that could be more expensive than renovation.

So far, discussions about Midtown have focused on its problems and potential new uses. One other issue is likely to be raised soon, however: Midtown's architecture and history.

The mall and the tower were designed by Victor Gruen, considered the originator of shopping malls in the US. Midtown has the distinction of being the nation's first downtown indoor shopping mall.

And while its architecture isn't wildly popular locally, Midtown is considered a "reasonably important" Modern building, says architectural historian Jean France. And it's a significant piece of downtown Rochester's skyscape.

Gruen, an Austrian who practiced in the US for many of his professional years, is "a minor major architect," says France. And Midtown was a pioneering work in downtown revitalization; Midtown, in fact, is "more of a planning achievement than it is an aesthetic one," she says.

Midtown, like other buildings of its period, may not be quite old enough to attract public support as an architectural treasure. "The buildings 50 to 60 years behind you are the ones you don't like," says France.

The Landmark Society, says its executive director, Joanne Arany, "is watching Midtown carefully," and Arany says she hopes city officials will involve the Landmark Society in its discussions about Midtown's future.

Late 20th-century architecture is "the next frontier" in preservation, says Arany, and Midtown has an important place in Rochester's architectural history.

ARTWalk --- the University Avenue public art project connecting the George Eastman House and the MemorialArtGallery --- is gearing up for an expansion. And if a meeting that took place last week bears fruit, it could have a sibling to the north as well.

On January 5, ARTWalk Executive Director Doug Rice met with a contingent of public officials visiting from Hamilton, Ontario. The five-member group hopes to replicate ARTWalk for Hamilton's own downtown redevelopment project. And apparently, they liked what they saw.

"It seems like it would be a good fit," says Paul de Courcy, executive director of Arts Hamilton. The ARTWalk project "allows the community to express what they think the streets should be," says de Courcy. "Speaking for our artistic and general community, it's a good way to get them involved."

During the trip, De Courcy and the Hamilton officials toured ARTWalk and met with local arts and civic leaders. Now back in Canada, De Courcy says, "the buzz is going around." "We're putting our thoughts together to present to our city council," he says.

This isn't the first time other cities have expressed interest in ARTWalk, which officially opened in May 2002. "I believe we've become a model to people from what they find out on the web," says ARTWalk's Rice.

And there may be more ARTWalk to come. Plans call for expanding south on Goodman to connect to the Rochester Museum and Science Center and the Strasenburgh Planetarium; north on Goodman to Village Gate and the Arts and Cultural Council; and west on University to Visual Studies Workshop and the School of the Arts.

"Right now, we're trying to raise $4 million to $5 million to notch it up and make it a jewel," Rice says. "We're in our infancy; not completed. Not even close. We're just getting our legs and getting started."

Rochester's Neighbors Building Neighborhoods program, a City Hall initiative to involve residents and business owners in planning the city's future, is 12 years old. And a City Council committee has begun a process to assess its progress and look at its future.

Council's Housing and Community Development Committee has scheduled 10 neighborhood meetings, called "Pizza and Planning," to get public comments. All are taking place from 5:30 to 7 p.m.

The first two were held January 8 (at MarshallHigh School) and January 9 (at CharlotteHigh School). The remaining schedule: