When Sandra and Carl Bank first moved into their country home on Rte. 31 just outside the town of Clarendon, they had to get used to one thing: the annoying sound of squealing tires. When the DOT repaved the road near the Banks' home it made the curve a bit sharper, and it lowered the grade on one side to let rain run off.

That was more than two years ago, but the Banks say many drivers still go so fast they lose control and end up in the side yard --- an area that Sandra calls "the pit."

Her solution is an advisory to uninitiated motorists. Two 4' by 8' sheets of plywood are propped up, creating a makeshift billboard that says: "# of vehicles to miss this turn ...18! Please slow down!"

Each time a driver misses the turn, Banks takes down the old number and hangs up a new one.

"We had one man that had to have a Mercy Flight out of here," says Banks. "We had another one that was like the Dukes of Hazard. He went right over the pit and landed on the other side of the field. The latest was a lady that flipped over. Fortunately, no one has been killed."

Banks says she and her husband thought about making a barricade out of some of the huge boulders on their property, but that might make the crash worse. She says she hates to be pessimistic, but she is prepared. She has boards numbered through 22 ready to put in service.

Banks also worries about her children and pets. And she says getting in and out of their driveway is a fright.

"We have 19 acres here," she says. "This farm once belonged to my husband's family when all of this was farmland. It kind of makes me laugh, because all you have to do is tell people where the sign is, and right away they say they don't need an address or directions. I always thought I wanted a quiet home in the country. Now if I slow down to make the curve and not miss my own driveway, the people behind me get angry and start honking." 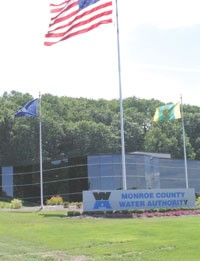 LastweekState Comptroller Alan Hevesi's office gave the public yet another look at the abuses that can occur in public authorities.

As our article this week on government reform notes (page 10), authorities have important uses. But the shenanigan-potential is enormous. And in 2002, according to the Hevesi report, out of sight of public scrutiny --- hidden even from the authority's own passive board --- two Monroe County Water Authority board officers gave undeserved pay and benefits to the authority's executive director, John Stanwix. Five other officials were also taken care of handsomely, says the Hevesi report, but the "principal beneficiary of executive enrichment schemes" was Stanwix.

"In sum," says the report, "authority executives appear to have managed the authority to enrich themselves rather than to serve rate payers."

This was possible, in large part, because the Water Authority board didn't ask enough questions. And the officers who took care of Stanwix must have assumed they wouldn't.

The Water Authority operates outside of the scrutiny of elected officials like the CountyLegislature. But there's supposed to be at least a bit of oversight built into the system: board members must represent two different political parties. Traditionally, that's been Republican and Democratic. In the Stanwix era, however, and today as well, board members come from the Republican Party and its frequent co-conspirator, the Conservative Party.

Stanwix, a former Republican county legislator and Republican Party chair, headed the Water Authority from 1995 to 2002. In his last three years there, he got raises amounting to 44.8 percent, according to the Hevesi report. And four months before he retired, his friends on the board signed an employment agreement that gave him even more: "$52,000 in unearned vacation days, $60,000 for sick leave days, $105,000 for insurance and medical reimbursement benefits, and a $72,000 lump-sum payment," says the report.

The raises, says the report, were enough to boost his state pension 25 percent. His friends also gave him lifetime medical insurance. "Stanwix had not earned, or was not eligible for, many of these benefits," says the report.

The Hevesi report estimates that Stanwix's enhancements amount to $290,000 --- plus the 44.8 percent pay hike. All of that money came out of Water Authority users' pockets. But that, grumbles Democratic County Legislator Paul Haney, doesn't include the cost of the state pension, which taxpayers will pay for --- for the rest of Stanwix's life.

(Stanwix was 60 when he retired, according to a Democrat and Chronicle report at the time.)

There's more to come, apparently. Hevesi's office has also been investigating possible conflicts of interest in the authority's contracts. That report hasn't yet been released.

The Stanwix saga is a reminder of the tentacles and power of the Republican Party, at least during that period. One of the people who approved the largess for him was the authority's treasurer, Peter Formicola, a former MonroeCounty legislator and a developer with longtime Republican connections.

It was Formicola who bought a parking lot at the airport and tried to sell it to the county a year later for $1 million more than he paid for it. The county has leased space in buildings partially owned by Formicola. In the late 1990's, his firm bought a large parcel of property at the corner of West Main Street and Plymouth Avenue in downtown Rochester hoping, according to a Democrat and Chronicle report at the time, to get Monroe Community College to locate a new facility there. (The CountyLegislature appoints the MCC board members.)

The other person who approved the Stanwix deal: Tom Mooney, the authority's vice chair and head of the Rochester-area Chamber of Commerce, an organization noted for criticizing the high cost of government.

The Water Authority board and some county legislators are making noises about trying to get some of the money back. The fix doesn't have to be limited to that, however. For example:

• The CountyLegislature could appoint Democrats to replace the Conservatives.

• It could insist on approving the authority's budget, hiring, and awarding of contracts. With the Minarik Republicans controlling the Water Authority Board, the county executive's office, and the CountyLegislature, that might not change much. But it would get the authority's actions out in the public view.

To do this, the legislature would have to ask the State Legislature to approve changes in the authorizing legislation that created the Water Authority. As of Tuesday, that item wasn't listed on the agendas of any of this week's Lej committee meetings.

The heat is on 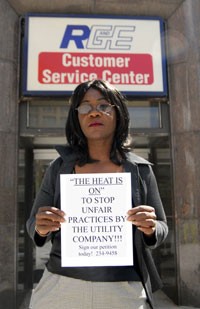 Heat in Rochester, says Darlene Williams, is "a necessity, not a luxury."

Williams, a founding member of a grassroots organization called The Heat Is On, is protesting Rochester Gas & Electric's decision to enforce an old policy: full payment or service termination.

Currently, RG&E customers who fall behind on their payments can maintain service as long as they pay half their bill every month. If RG&E moves forward with its strict-compliance initiative, however, defaulting customers might find themselves in cold, dark homes after October 2. (RG&E had initially planned to enforce compliance earlier this month but relented after protestors picketed outside the company's office). People, says Williams "shouldn't be forced to go on welfare to pay RG&E."

(RG&E representatives did not respond to requests for comment.)

There is a state law that protects poor people, says Charles Brennan, an attorney with the Public Utility Law Project, which advocates for low-income people. Passed in 1981, the Home Energy Fair Practices Act requires utility companies to create a deferred-payment agreement for struggling customers. Brennan says most poor customers opt into a plan that allows them to pay nothing up front and $10 a month on the arrears. Deferred payment options, however, are a one-shot deal; utility companies can terminate service agreements for customers who fall behind on subsequent payments.

RG&E could be legally liable, says Brennan, if its company rules and regulations allowed for half payments --- but, he says, that's not the case. The only recourse some customers may have, he says, is if they can prove that RG&E's unwritten policy created reliance. "Whether or not the court would buy this argument, I don't have the answer to that," he says.

But Williams and her supporters hope that RG&E looks at the issue from a social rather than a legal standpoint. Erma Hall, who lives on Cummings Street in northeast Rochester, says she's concerned about what will happen this winter. "I don't get any benefits, and I work part time," says Hall, who's raising her three grandchildren. Hall says she's particularly worried about losing heat because two of her grandchildren have asthma. She hopes, she says, that RG&E will continue to work with poor people to come up with a fair payment plan.

Williams says Heat members plan to meet with RG&E representatives this week to discuss the change. Ideally, she says, the group would like to go back to the way things were. But she's open to compromise. "Why," she asks, "didn't they go from 50 percent to 60 percent" and gradually increase rates over five years?

Rising energy prices have also made it hard for people to keep up with their payments, Williams says. Williams would like RG&E to partner with area agencies to educate people on how to conserve energy. Two agencies in the Rochester area provide free weatherization services to people whose incomes are less than 60 percent of the state median: Action for a Better Community and Rural Opportunities. (Williams is an office manager at ABC, but says the agency is not involved with Heat.)

Rodney Washington, ABC's energy-conservation program director, says many people don't realize how much energy they waste. Sometimes, he says, "You go to a house where a person qualifies for services and the heat is at 80.... We gotta go in there and literally get out of our clothes." But, adds Washington, a lot of people conserve energy and still struggle to make ends meet. There are, he says, "people who are conserving and doing everything that they can do to try to keep the bill as low as they can, and they're just fighting a losing battle."

Moreover, with demand for ABC's and Rural Opportunities' services outstripping supply, it might take several months before people could get free consultation and home repairs.

Like some other critics of RG&E, Williams says utilities should be operated as nonprofits. For the time being however, Williams says just wants to help people like Hall make it through another Rochester winter. "We just want them (RG&E) to be reasonable," she says.

MCC students will see a $100 hike in tuition this year.

That change was part of the MCC budget approved by the CountyLegislature earlier this month. Legislature Democrats made a brief, futile attempt to lower the hike to $50. The Dems have criticized the MCC administration for carrying an unreserved fund balance of nearly 16 percent of its total budget while it seeks tuition increases.

Speaking to a legislature committee last month, MCC President Tom Flynn acknowledged that tuition contributes a higher percentage of the college's budget than state guidelines suggest. The shortfall, though, comes from the share of the budget the county ought to be paying and is not, he said. According to Flynn, MonroeCounty contributes the state's second lowest amount of money to its community college, as a percentage of the college's budget. With the county's fiscal problems, however, that doesn't appear likely to change anytime soon.

The Dems' amendment to lower the tuition hike failed 18 to 11. The lone Democrat to vote against it was its sponsor, Ted O'Brien. That was a procedural move meant to allow O'Brien to bring the measure back at a later date. But since it was an amendment to a larger piece of legislation, which passed, Democrats aren't sure that's even possible.