Meredith Monk visits U of R for artist residency 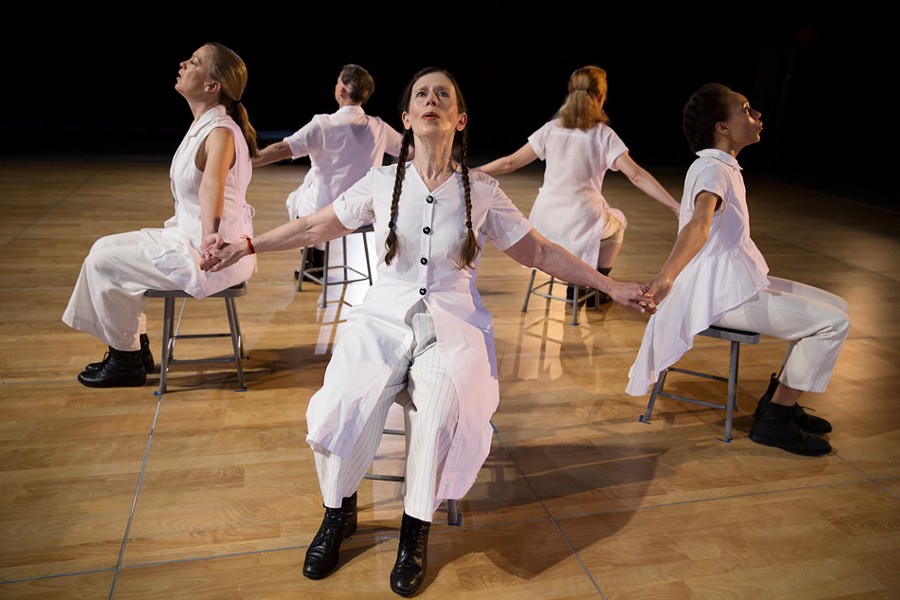 [ UPDATED 10/21/19 ] Meredith Monk is a living legend in the world of contemporary classical music. The avant-garde composer, vocalist, director, and choreographer has carved out a niche all her own, even as she has made impactful forays into the mediums of opera, site-specific performances, music theater, and film over the course of a career spanning more than 50 years.

A winner of a MacArthur Fellowship (commonly known as a “Genius” Grant), a two-time Guggenheim Fellowship winner, and the recipient of a 2015 National Medal of Arts, Monk will bring her Vocal Ensemble to Rochester for a residency entitled “Dancing Voice/Singing Body” from Sunday, October 20 through Wednesday, October 23 at the University of Rochester’s School of Arts and Sciences and Eastman School of Music.

The residency will include a concert version of Monk’s latest music theater work “Cellular Songs” on Monday, October 21 at University of Rochester’s Spurrier Hall, as well as a Wednesday, October 23 talk at Eastman School of Music’s Hatch Recital Hall (433 East Main Street), between Monk and Eastman ethnomusicology professor Anaar Desai-Stephens, at 12:30 p.m. Both events are free and open to the public.

As the title of Monk’s residency suggests, the link between music and movement is inseparable for her. Born into a musical family that included four generations of singers, Monk was trained from an early age in Dalcroze eurhythmics, as a way to combat coordination problems. “The other children were learning music through their bodies,” Monk says, “but I already was very musical, so I was learning my body through music.”

“I think that training was so much about the non-separation of music and movement,” she says. “And then I think, for me, also coming from both the music and dance background, that I always was very interested in the voice as a kinetic instrument. I was very inspired by that as a young artist working with my voice. Sometimes the movement mirrors the voice, sometimes it’s in counterpoint. Sometimes it’s in contrast. It has many different variations of how I do work with gesture in relation to singing.”

Monk’s works are vocal-centric, but she rarely incorporates words. Instead, each composition uses a different set of phonemes, or units of sound, to create nonverbal communication that can be ephemeral and otherworldly or guttural and earthy. “I think of each piece as a sound world, and I’m really trying to find the vocabulary of that sound world,” Monk says.

In her early 20’s, Monk had an epiphany that she could treat the voice as an instrument. The resulting music draws the listener’s ears to the singers’ breathing and the physical apparatuses producing the sound, in a way that is more abstract than narrative.

“I trust that nonverbal communication has a kind of depth and universality that words don't necessarily have,” Monk says. “And I think that ultimately I’m looking for a very direct experience. Not using a lot of text has allowed us to travel all over the world. We’ve gone to 52 countries in my lifetime, and I think the way that people respond is very direct.

“And I think there are feelings for which we don’t have words, that are not labels. In my work, I try for the ineffable and the numinous. Words are quite pointy. And I think I’m trying for something that is a little bit more open for people to experience it in their own way.”

In the composition “Cellular Songs,” as in many of her works, Monk utilizes a vocal technique called hocketing, in which two or more singers deliver a single melody by alternating one note at a time. This device creates a highly rhythmic, interlocking texture. When asked why hocketing is so prevalent in her work, Monk says, ““I love that sense of interdependence.”

Premiered at the Brooklyn Academy of Music in March 2018, “Cellular Songs” was inspired by the interconnectivity of cells in the human body. “It’s the smallest unit of life, and within each cell is this extraordinarily complex, intelligent mechanism of interdependence,” Monk says. “And then when you think about the billions of cells in our bodies, that’s another system of interdependence.”

The theme of interdependence continues with a new work-in-progress for eight singers in a site-specific presentation, in which the spatial relationship between the performers and the audience will change during the performance. Referred to by Monk under the working title of “Indra’s Net,” the composition will use the Buddhist metaphor for interdependence as a starting point. According to the myth, Indra is a legendary king who casts a net over the entire universe; at each intersection of the net is a jewel with infinite facets, reflecting all the other jewels in the universe.

Monk envisions the forthcoming work as a kind of third installment in a trilogy that includes “On Behalf of Nature,” from 2016, and “Cellular Songs.” She has been mulling over the tentatively titled “Indra’s Net” for a decade. “I’ve finished being terrified,” she says of the piece, “and now I’m starting to get interested, which is always a good sign.”

Daniel J. Kushner is CITY's music editor. He can be reached at dkushner@rochester-citynews.com.