Ryan Baker found the Greek word meraki (pronounced "may-rah-key") on Google. He was searching for interesting names and came across the word, which means "to do something with soul, creativity, or love; to put something of yourself into your work." Baker chose it as the name for his new pop-up coffee company that recently made its debut at Cheesy Eddie's in the South Wedge. The name isn't just an interesting conversation starter with elusive pronunciation; Baker wants it to be a promise to his patrons.

In the front corner of Cheesy Eddie's on Meraki's opening day, Baker is barely visible through a thick line of customers. In his red flannel and green canvas apron — Baker's typical uniform — he snaps the lid onto a woman's Salted Nutella Latte, which is, for now, Meraki's signature drink.

"That might be the last one," he says, congratulating the customer on making it just in time. If she comes back soon, though, she'll find a new signature drink on Meraki's menu, listed on a red felt banner hanging next to the bar. The rotating line of signature drinks will be "coffee cocktails, more like a mocktail," Baker says. "It's going to be something that's super approachable, like the Salted Nutella Latte."

Baker sets the drink on the counter, and his wife, Holly, cashes out their customer — one of 114 people who come in on Meraki's first day. The coffee bar Baker is standing behind is covered edge to edge with the espresso machine, a glass of tiny Meraki buttons, and a pineapple vase, a symbol for the Bakers' hospitality. The hand-painted wood supporting it all has its own significance, too. It's from his grandparent's barn, which he played in as a kid. And the front of the bar is embellished with a pennant, an homage to Baker's love of baseball. 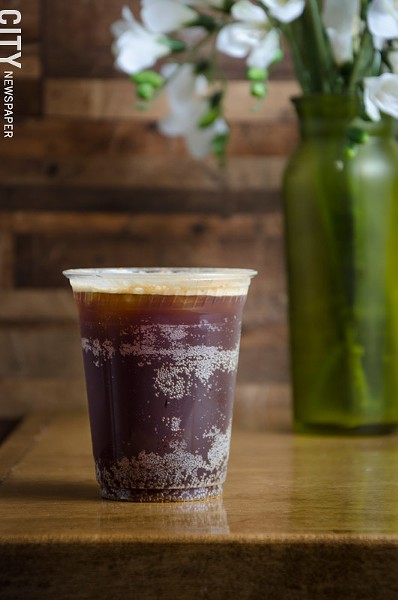 Baker has more than three years of barista experience from as many different coffee shops. He started at Leaf & Bean Coffee Co., moved to Terra Cotta Coffee House in his hometown of Almond, and then was on to Glen Edith. "I just love connecting with people overall and letting them know that I really care," Baker says. "That really means a lot to me. It's not just a cup of coffee that I'm giving to someone else. This is us connecting, and we connect more over time."

Every customer, Baker asks their name, where they're from, what they do, and how they heard about Meraki. For the duration of the drink-making process — the woman ordering the Salted Nutella Latte, the barista from Fuego coming in for an espresso, or the South Wedge local wanting a cappuccino — the people are Baker's real concern. 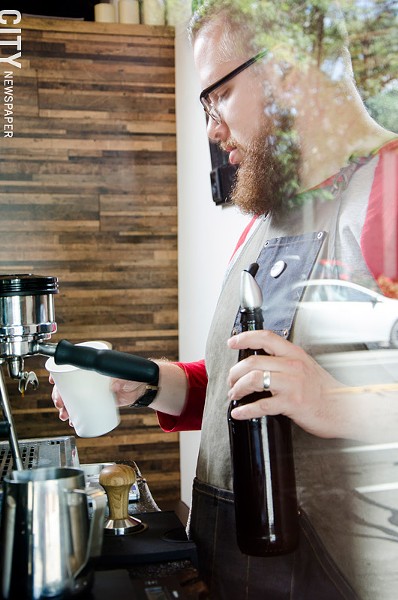 The coffee Baker is using for his drinks (the menu lists the signature drink, espresso, cortado, latte, and cappuccino) is brought in from outside the robust Rochester scene. Meraki uses beans from Parlor Coffee of Williamsburg, Brooklyn. "When I cupped their coffees a little more than a year ago, everything on the table just popped," he says. "I just really want to be able to bring something that's new to Rochester and that deserves to be seen."

The South Wedge will find Baker at Cheesy Eddie's regularly — the store is owned by his aunt and uncle, Colleen and John Baker, and is the ideal location for Baker's pop-up. This has been Baker's dream for the last three years. "You could probably talk to most baristas at a coffeeshop and they're like, 'Yeah I really want to open up something someday,'" Baker says. "And I just said that for a long time; I just got sick of saying that. As opposed to saying 'someday,' I'm actually going to make it happen."