Part 2 of a series

This is the second installment of a two-part series on mental health attitudes, research, and available services in the Rochester region. The first part appeared in our December 11-17 issue.

Jim Eckberg spent much of the 90's in and out of hospitals. Sometimes hospital personnel strapped him with a belt in a chair in his room to keep him from running away.

When he wasn't in a hospital psych ward, Eckberg was homeless for long periods, estranged from his family and friends. His parents, not knowing whether their son was dead or alive, took photos of him to psych wards and shelters, hoping someone would recognize him.

During a particularly tormented period, Eckberg, a tall, lanky man with an earnest face, doused his body with kerosene and turpentine and tried to set himself on fire.

Eckberg has schizophrenia, widely considered among the most serious of mental illnesses, though his condition is currently under control.

"I heard a voice that others didn't hear," he says. "A voice in my head would say over and over, 'You'll be sorry if you wake up tomorrow morning.' There are only two ways not to wake up; one is not to go to sleep and the other is to die."

"Frequently, these are people living on the edges of the economy," says Dr. Laurence Guttmacher, clinical director at Rochester Psychiatric Center. "These are often people who live in stress-filled neighborhoods. They struggle with paying for medications versus buying food."

But there are also many people with mental illnesses who have found a pathway to wellness. In this second installment of our examination of mental health programs and treatment in the Rochester area, people living with serious mental disorders share their experiences. Some have made remarkable recoveries and are living fulfilling lives, while others are still working toward better health.

Though considerable progress has been made in the treatment of mental illness, many important questions are still unanswered: What are the challenges, hurdles, and pitfalls? And are people with mental illness ever completely cured, or is it a lifelong condition like diabetes that requires careful management?

Receiving a clear and accurate diagnosis is generally every patient's goal. But diagnosing mental illness isn't always easy, and it can be an enormous hurdle and source of frustration for both patients and practitioners. 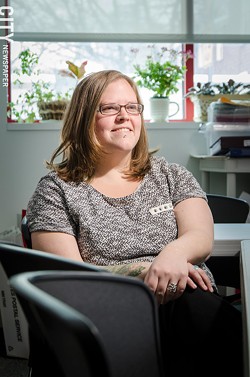 Jonna Terhune, who is 30, says she's been dealing with mental illness since she was 15, and it's taken a long time to get a diagnosis. She says she came close to committing suicide. And during a psychotic episode, Terhune says, she accused her parents of strange behaviors.

Terhune says she was being treated for post-traumatic stress and bipolar disorder, but sensed that something was still wrong.

"For a long time, I was put on medications that weren't meant for the problems I was having," Terhune says.

Today she has an electronic device implanted in her chest that sends a tiny electronic pulse to her brain every three minutes, she says. The device, which resembles a pacemaker, tends to cause her to speak in a slow, deliberate pattern. The electrical stimulation is used to treat people with severe forms of depression.

Mitch Stern, 44, says he had similar difficulty getting an accurate diagnosis. He says he experienced mild symptoms related to obsessive-compulsive disorder during his early college years.

His more serious symptoms developed when he was in law school, he says. His girlfriend had left him, and he was about to take the bar exam. He had a breakdown that required hospitalization, he says, and he was eventually told that he was schizoaffective. The illness is described as a combination of schizophrenia and mood disorders.

Stern says he spent more than two years drifting. During some of that time, he says, he lived on the streets of Los Angeles and San Francisco, often off his medications.

"I had delusions that I was telepathic with certain celebrities," Stern says. At one point, he says, he entered a home in the Hollywood Hills and made pancakes. The owners weren't home, and the maid thought he was a guest. The adventure landed him in the LA County jail, he says.

There are several reasons why it can be difficult to get a clear diagnosis, says Dr. Guttmacher. For starters, he says, many mental illnesses have similar symptoms.

"Our diagnoses are still quite crude," he says. "We're much better at treating symptoms. We have medications that can do a pretty good job at treating your auditory hallucinations, for example."

If we compare the treatment options of the 1950's to 2010, certainly people are better off, he says, but they're often not as well off as they and the medical community would like.

"Are there still people with mental illnesses in jail? Yes." Guttmacher says. "But are there more people living on their own independently? Yes, that's true, too."

Getting an accurate diagnosis would be easier if people had thorough evaluations, says Dr. John McIntyre, former chair of the Department of Psychiatry and Behavioral Health at Unity Health. People are too often treated for what may seem like a temporary event.

But frequently there are barriers preventing that from occurring, such as having adequate and consistent health insurance, says Guttmacher. And even when people have an evaluation that leads to an accurate diagnosis, Guttmacher says, taking medications properly and consistently is a significant problem.

"Everybody has medication-compliance issues," Guttmacher says. "Even I have problems with compliance."

But they're often worse for people with mental illnesses, he says. The concern many people have with the medications is that they often don't provide immediate results, Guttmacher says. Sometimes people don't know whether the drugs are helping, he says, because they haven't been taking them properly long enough.

And many patients complain about the medications' side effects, such as feeling logy, zoned out, or lightheaded. Sometimes there's the possibility of weight gain, mood swings, and sexual dysfunction, too.

"No wonder people don't like taking them," Guttmacher says.

Arriving at a diagnosis and prescribing corresponding medications can also be complicated when a patient has multiple mental illnesses, sometimes referred to as dual diagnosis. It's quite common for depression, for example, to be accompanied by drug and alcohol addictions.

Fifty-two-year-old Stanley Deuel, who is recovering from alcoholism, says he remembers drinking and taking drugs when he was 13. He says he didn't know, however, that he was also suffering from depression.

"I could always stop taking drugs," he says. "But not the alcohol."

Now sober after multiple hospitalizations and numerous failed treatment programs, Deuel says he owes his recovery to a University of Rochester Medical Center program. For the first time in his life, he says, his underlying problems with chronic depression are being addressed.

"I think I had depression issues even as a kid," Deuel says.

There was a time, Deuel says, when he couldn't even walk to his neighborhood store for a pack of cigarettes because he would invariably succumb and come out with a six-pack. He says he's taking medication that eliminates the urges.

Deuel, who says he attempted suicide three times, says he realizes now that he drank to numb his sense of low self-worth. He says the constant turmoil in his life – multiple arrests, marital and employment problems – has finally begun to fade. And he says he plans to go to college.

"I've had a complex life, but I'm a simple person," Deuel says. "I've survived this far, so it can only get better from here."

Many other people dealing with mental health problems endured dysfunctional relationships early in life. Physical, emotional, and sexual abuse were often major contributors to their disorders. So it's not surprising that many people with mental illnesses have a long history of broken relationships and isolation.

And even the most devoted parents, spouses, and siblings can be worn down emotionally, physically, and financially following years of early morning calls from jails, unexplained disappearances, and bouts of joblessness and homelessness.

Connecting with others and rebuilding healthy relationships is another huge hurdle for people recovering from mental illnesses.

Mitch Stern's father, Gary, says it's taken years for him to fully understand and accept his son's mental illness. Though they clearly have an inseparable bond today, his son's illness tested Gary's resilience.

"When he [Mitch] was born, my wife and I thought this is the next president of the United States," says Gary Stern. "I think it took me 10 years to figure out what mental illness is all about."

While they've made tremendous progress in rebuilding their relationship, some difficult residual emotions still haunt father and son.

"I'm still waiting to wake up from what I put my family through," Mitch Stern says.

Sometimes, however, it isn't possible for an individual with a mental illness to reconnect with family members. Maybe the person's parents are deceased and their siblings live far away. And help comes from neighbors like Nate Brown.

Brown, a local radio host and health educator, says he's a born nurturer. His mother and grandmother were nurturers, too, he says.

Brown has participated in a URMC program called Natural Helpers, which trains people in neighborhoods throughout the city to be supportive of others as a way to build community wellness. A natural helper's support can take many forms – everything from reporting crime to noticing when a neighbor's health is declining and helping the person find professional care.

And Brown mentions a man he knew who had mental illness. "When he was taking his meds, he was fine," Brown says. "When he didn't take his meds, it would cause trouble. Sometimes I would see him talking to himself and I would just say, 'How you doin' today? Are you taking your medications like you're supposed to?' And it was O.K., because he knew I wasn't trying to harm him."

The natural helper's relationship is built on trust, Brown says. And he says there are a lot more natural helpers than we probably realize. They're often the glue that holds neighborhoods together, he says.

"You become a sounding board," he says. "I listen. But the reason people will talk to me is because I live in the same neighborhood as they do. I see them every day. I know what they're going through. Were you ever homeless? Ever lose your RG&E? Ever suspended from school? There's common ground."

For many people who are living with mental illness, connecting with others who have a mental illness can offer hope and inspiration.

Despite the horrific difficulties Jim Eckberg endured as a young man with schizophrenia, he spends much of his time these days with his wife, Eunice, in community outreach efforts. The couple facilitates support groups.

Eunice Eckberg, who has been diagnosed with bipolar disorder, says having a mental illness doesn't mean you can't have a rich and fulfilling life. But some aspirations and dreams may not be possible, she says. For instance, she says she wanted to be a teacher, but later decided against it.

But she says that hasn't stopped her from pursuing other goals, including having a happy marriage – something many people with a mental illness might assume isn't possible.

After Eunice Eckberg's mother had all but convinced her that her mental illness was something she brought upon herself, she thought she would remain single, she says.

"My mother would say, 'It's your burden to bear; don't blame me,'" says Eunice. '"If you just lived your life like you were raised, have a Christ-like lifestyle, you wouldn't have these problems.'"

Shortly after Eunice introduced her mother to Jim, her mother suffered a stroke. The couple ended up being her caretakers. Eunice describes it as a turning point in her life: the moment she was finally able to take control.

"Have you heard the story about the ugly duckling that became a swan? Well, Eunice is the swan," Jim Eckberg says. "I got lucky and married a swan."