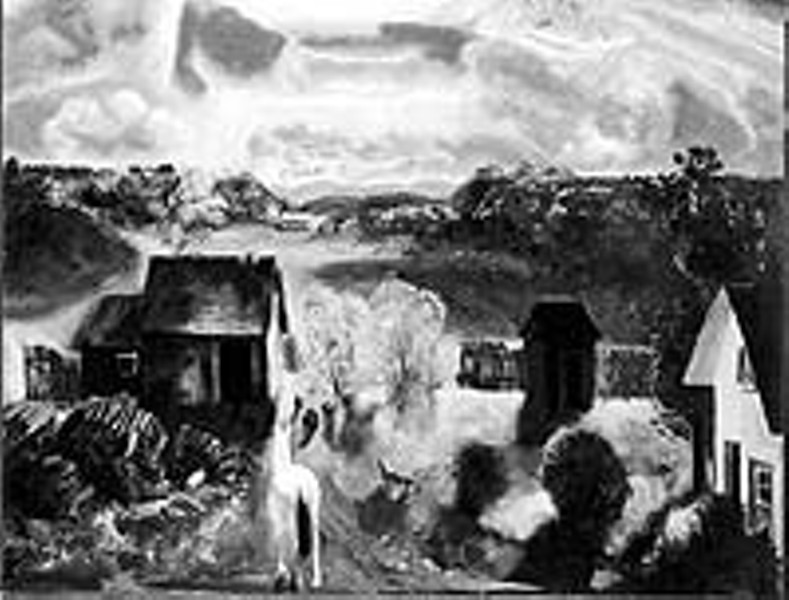 In 1969, thousands of peace-loving music devotees gathered near a small town in the Catskills for what was to become a landmark in American cultural history. The Woodstock that George Bellows knew and loved, half a century earlier, was an altogether smaller affair. But for many of the artists who came to work there, it represented an equally potent source of inspiration.

The first artists' colony in Woodstock was established in 1902, and by the time Bellows arrived in the spring of 1920 it hosted a lively community. He came with his family to visit Eugene Speicher, an old friend from his art school days, and was instantly hooked. The easy company of like-minded artists, the fresh mountain air, and the beautiful surroundings offered welcome respite against the hustle and bustle of New York City. And he soon arranged to rent accommodation for the whole of the summer.

Returning again the next year, he decided to purchase some land, and by 1922 had built his own house. Over the next few years he was to spend most of his summers and autumns there until his sudden death in 1925 from a ruptured appendix. He was only 42, in mid-career. But he had left an indelible mark on the landscape of American art.

Leaving For The Country: George Bellows at Woodstock, curated by Marjorie Searl and City Newspaper freelancer Ron Netsky for the Memorial Art Gallery, is the first major exhibition to explore this final period of Bellows' life. Many critics have neglected work from this time in favor of Bellows' earlier reputation-building canvases, namely his boxing scenes and Ashcan-influenced depictions of urban life. In a review in Time magazine in 1996, Robert Hughes went so far as to declare that "his best paintings were finished by 1913."

This was the year of the famous Armory show, which Bellows helped to organize, and the French cubist art that he saw there seems to have sparked a deeper interest in art theory. For Hughes, this was a slippery slope that "did his art no good." The popular perception of Bellows both now and during his own lifetime is of a large athletic man --- he was an enthusiastic coach for the Woodstock baseball team --- who painted his immediate surroundings with gusto and vigor. He was a passionate pragmatist, not a sensitive thinker. The truth, of course, is not so black and white.

In 1917, Bellows became aware of the teachings of Jay Hambidge, whose theory of Dynamic Symmetry advocated a rigorous system of proportion based on geometric principles. Bellows quickly assimilated these ideas into his work, and the requisite lines, grids, and circles can be seen structuring the preparatory sketches for the large triple portrait of his aunt, daughter, and mother, entitled Elinor, Jean, and Anna (1920).

Critics are sometimes disappointed that Bellows, the no-nonsense painter of American life, could have "fallen" so easily for these constricting theories. Was he succumbing to pressures to be more "modern" or "European?" Perhaps he was. But Bellows was able to appreciate Hambidge's system on an entirely practical level: Elinor, Jean, and Anna turned out to be one of his best portraits. The proof was in the pudding, so to speak. And contemporary critics fell over themselves to congratulate him. One of them, John Jay Chapman, declared it "a national treasure and monument," adding, "I feel like going and selling all that I have to buy it!"

On the other hand, many of Bellows' portraits from this time are somewhat wooden by comparison. In fact, the strength of this exhibition lies where you might expect it: in the landscapes. One of Bellows' most famous pictures from this period, The White Horse (1922), presents a swooping vista of an eerie landscape, side-lit by a sinking sun. The horse faces away from us towards a stormy horizon and the whole is suffused with an almost electrical sense of anticipation, as if waiting for the thunder-crack after a flash of lightning.

A calmer note is struck by the lesser-known but equally impressive Trout Stream and Mountains (1920), an elegy of lush greens, muddy browns, and steely blues in which a fisherman stands silently contemplating his lot in the foreground. Both these pictures employ Dynamic Symmetry, most notably in the slashing angular formations in the skies. Thisdislocation of natural forms, moving away from direct observation of nature, also seems to represent a shift for Bellows onto a more thoughtful, philosophical plane.

The last room in the show is dominated by Two Women (1924), which carries an even heavier symbolic load. Based on Titian's Sacred and Profane Love, the two women sit next to each other on a Victorian love seat, one naked holding a rosary, the other clothed holding a handbag. Finished only months before Bellows' own death it shows him once again exploring new territory. You can only wonder at how his work might have progressed had he lived. It's an odd piece, and the brash allegorical content mixed with Bellows' garish choice of colors --- clashing purples and greens, yellows, and blues --- makes for a jarring ensemble. I won't even get into the appallingly kitschy treatment of the two gallivanting puppies at the bottom left of the canvas.

Woodstock gave Bellows a chance to breathe. He spent the colder months of the year in New York, making lithographic reproductions of earlier paintings. And right up to the end he was still working on his ever-popular boxing scenes --- Dempsey and Firpo was finished in 1924. It was his time in Woodstock --- away from the pressures of the city --- that allowed him to push his art in different directions. Not all of those experiments were successful, but enough of them were. And that's all you can ever ask for.