September 24, 2020
Miguel Meléndez Jr. was sworn in as the newest member of Rochester City Council on Thursday immediately after the members of Council unanimously voted to appoint him to a vacant seat. 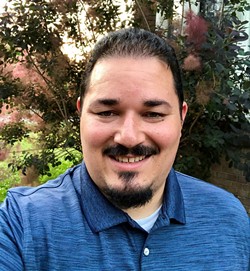 The at-large seat was previously held by Jackie Ortiz, who resigned in August to assume the position of Democratic commissioner for the Monroe County Board of Elections. She'd held the seat since 2009.

Meléndez, who is the chief community engagement officer for the Ibero-American Action League,  already has a history of working with City Hall. He helped draft the vision plan which would guide projects like La Marketa on North Clinton Avenue.

He also served as special projects director for Healthy Outcomes through Participation, Education, and Empowerment (Project HOPE), an initiative which set out to offer resources to those arrested on low-level drug offenses, as a response to the opioid epidemic.

In a ceremony ever held over ZOOM, Meléndez was sworn in by his uncle, Julio Vázquez, whose own time in city government included a stint as the city's Commissioner of Community Development under Mayor Bob Duffy.

"That explains a lot, you come from a strong bloodline," said Council President Loretta Scott, speaking to Meléndez. "It was a pleasure working with you when we started out looking at the opioid crisis in your neighborhood. You took the bull by the horns and made stuff happen, and you did it consistently."

Meléndez was selected from a pool of applicants received by Council, and will serve until Dec. 31, 2021.

All five at-large Council seats are up for election next year.

"For me, I am joining the effort at a crossroads between challenge and progress," Meléndez said. "We have several big picture concerns to address, and I am excited to listen and be part of this process."