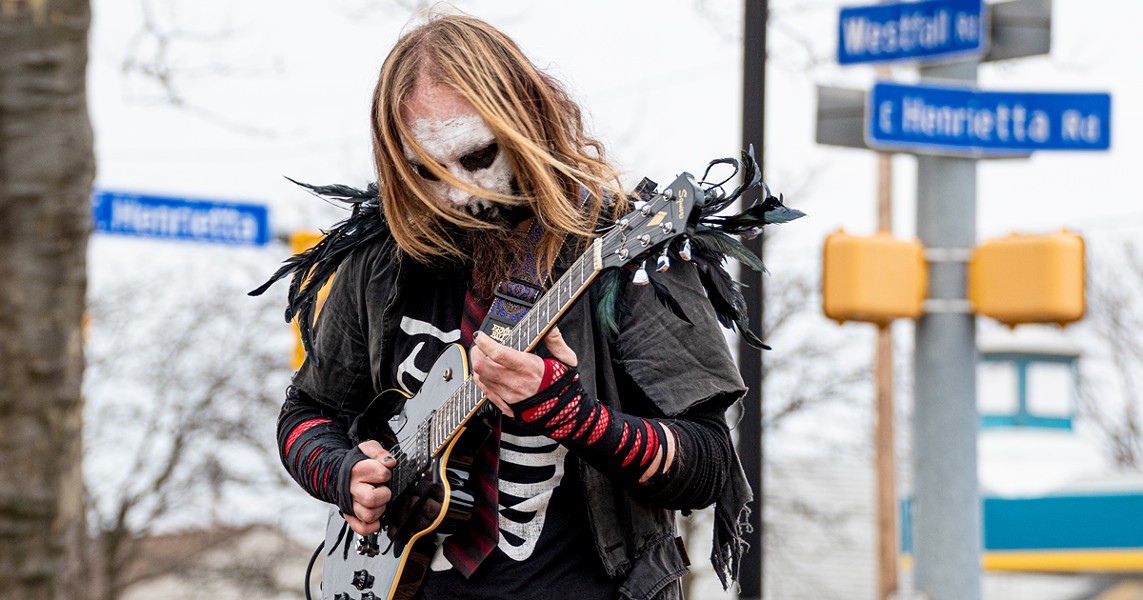 PHOTO BY JACOB WALSH Meet Dan Sprague, the enigmatic metal street performer who has become an easily spotted, and painted, face in the Rochester region.
Against the incessant din of traffic on Westfall Road, Dan Sprague set down a Blackstar amplifier on the sidewalk near CityGate, plugged in his Les Paul imitation guitar, and let a chord rip.

He was hard to miss even without the distorted rumbling of his amp. He wore a black trench coat with tattered elbows over vibrant purple Tripp pants. Crow feathers jutted from his shoulders. His face was masked in corpse paint, a porcelain white base with black accents around his mouth and eyes, like a skeleton. That is his signature outfit, complemented by a soft-shell guitar case.

It was a frigid December day and Sprague, 31, was on his way to Costco when he took a needed moment to shred. He had just visited his grandmother at Highland Hospital, where she is being treated for dementia. He stops by periodically to play his guitar for her. He said it is a way for them to bond.

“I try to jam in as many places as I can,” Sprague said between riffs. 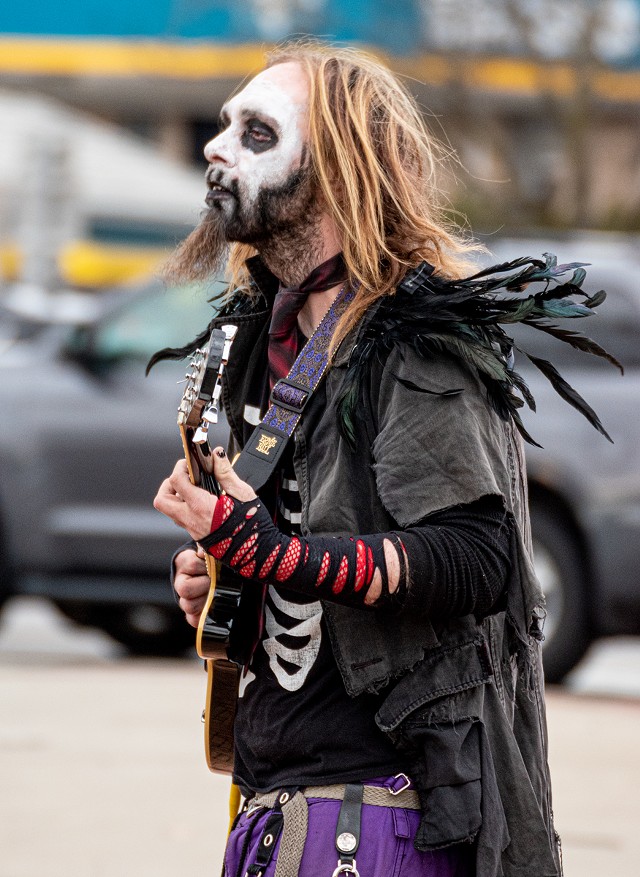 He was not exaggerating. As of late, Sprague has routinely popped up in his getup on street corners, benches, and parks across the region, wailing on his guitar. One day, he may be playing at the Roc City Skatepark, and the next on a suburban street corner. A native of Bergen in Genesee County, sometimes he’s spotted as far west as Medina in Orleans County.

“Walmart actually fired me for doing this on my lunch break,” Sprague said. “So all that made me do is take the show on the road.”

Sprague had been a staple of open mics at Lovin’ Cup near the Rochester Institute of Technology until the pandemic halted his weekly outing. But a global virus wasn’t going to end his passion to play metal for people, whether they wanted to hear it or not. As if to reinforce the point on Westfall Road, he played a tune called “Keeping the Shred Alive.”

His show takes quite a bit of dedication. While Sprague had worn his makeup only sporadically over the years, it became a full-time look around December 2020.

“The face paint actually just started with just eyeliner, and it got to the point where I was capable of at least drawing this every day,” Sprague said. “I don’t think I’ve taken it off since last Christmas, honestly.” 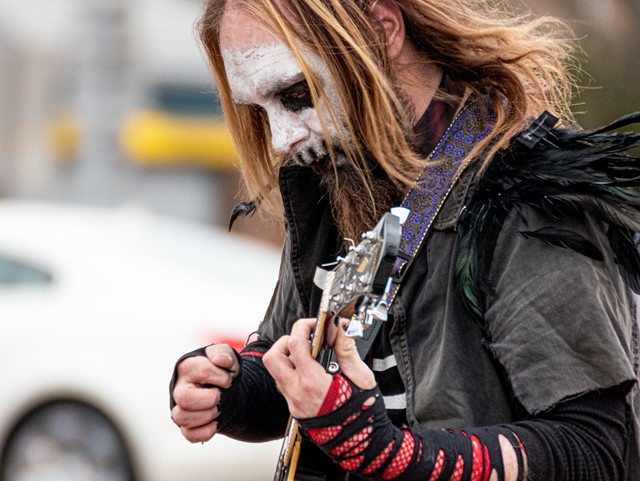 Corpse paint was immortalized by Norwegian black metal bands like Mayhem and Emperor and is intended to make the wearer appear inhuman or demonic. But Sprague said his makeup is an homage to horror-punk legends The Misfits, who wore similar face paint in the ’70s and ’80s.

In fact, Sprague’s unique wardrobe is composed of bits and pieces of his inspirations. For example, his tattered gloves that travel halfway up his forearms are a callback to the iconic World Wrestling Entertainment tag team duo The Hardy Boyz.

“The whole outfit is kind of taken from somewhere,” Sprague said. “Other than the pants, I’ve been wearing those since probably middle school or high school.”
The music, makeup, and outfit evoke a certain mystique. Matt Guarnere, who runs Lovin’ Cup’s open mic nights, actively avoids learning too much about Sprague. The persona has too much magic to be sullied by the mundanities of everyday life.

“I respect his otherness, that’s important,” Guarnere said. “I don’t need to know, I don’t want to, I don’t know if he’s troubled or whatever it is. The point is, when he walks through the doors I think he wants the ability to be that part of himself.”

Except for the time Sprague drank too much and took an impromptu nap outside the bar, Guarnere said, he has been a beloved feature of the open mic. Underneath Sprague’s outwardly spooky appearance is a soft-spoken courteousness.

“He is like prep school polite, it’s unusual,” Guarnere said. “His mama raised him right.”

Upon spotting Sprague on the street, it may be tempting to assume he is busking, performing for coin. But he said that’s not the case. While he’s happy to take a buck or two thrown into his guitar case, his real goal is to play some sick tunes.

“It’s definitely not my intention, I mean, people always throw stuff into my bag and I definitely appreciate that,” Sprague said.

Outside of his street performing routine, Sprague scrapes by doing auto body work in Bergen, and plays in two bands. One of them, Stevil, is a poppy mash-up of hip-hop, grunge, and metal influences. The other, Election Day, offers up “feel-good” folk-rock.

But on the streets, Sprague plays alone, and that makes him a rarity. Rochester is not a city with a vibrant street-performing culture outside of the major festival season. Despite that, he said, most people are very warm to his presence.

“It always seems very positive,” Sprague said. “People are always coming up to me, some people even request stuff if they’ve seen me play before.” 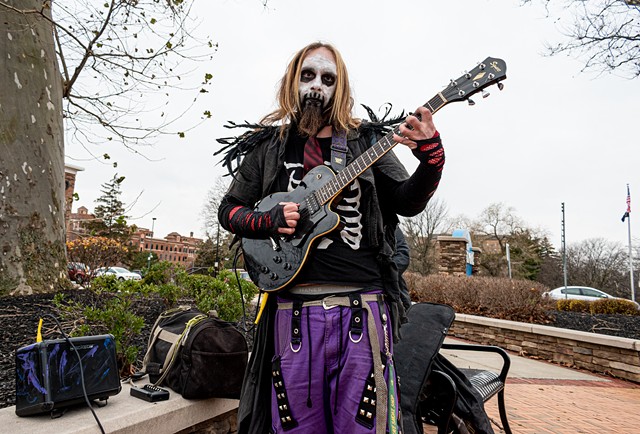 Sprague said he wishes there were more like him; people who are happy to plop down on a sidewalk and showcase their talent. Whether he goes alone or with company, he revels at any chance he gets to rock out.

“I live to play guitar for the most part,” Sprague said. “It’s more or less the first thing I did this morning, pick up an axe.”