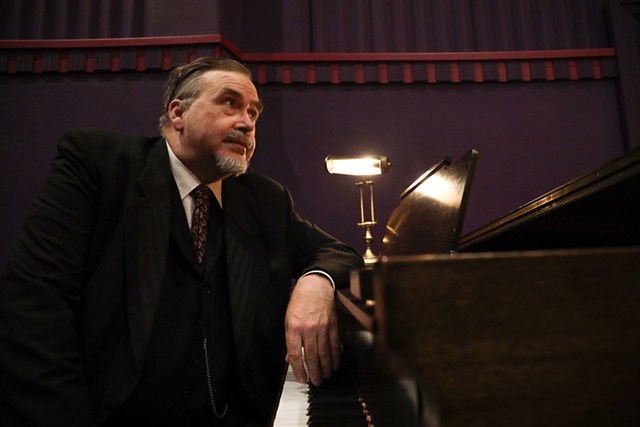 On a recent Tuesday evening, the gold velvet curtain at the George Eastman Museum’s Dryden Theatre rose to reveal a movie screen that flickered to life with an old-time silent film.

While the title cards ran, a live piano accompanist played romantic, meandering melodies, occasionally pounding out faster trills that set the tone for the story that followed.

An elegant heroine appeared in a luxurious room to confront the corpse of her father. The music was melancholy as she knelt over his body, swelled with drama when she cried, and built to a fever pitch as a group of men approached the mansion, barged into the room and declared — through ornately lettered title cards — that she must pay her father’s debts.

As far as the audience for the Dryden’s “Silent Tuesdays” film series was concerned, the accompanist, Philip Carli, hit all the right notes. What wasn’t apparent to anyone was that Carli was making the notes up on the spot.

“We process things incredibly fast,” Carli says of the small community of silent film accompanists around the country. “And a lot of what I’m doing is actually anticipating what’s about to happen. I have to predict ahead of the actual action.”

It may come as a surprise that the bulk of what silent film accompanists do is improvise. Like most silent films, the one playing at the Dryden that night — “A Sleeping Memory” from 1917 about a woman so shamed by her father’s suicide that she agrees to an experimental procedure to erase her memory — has no score.

With a few exceptions, most old films don’t even come with notes about mood, tone, or pace to help the accompanist. That isn’t because the notes have been lost to time. They never existed.

If the audience at the Dryden saw “A Sleeping Memory” at a silent film series in, say, Los Angeles next week with another accompanist, the music would be different.

The conventional explanation for the origins of accompaniment is that the music drowned out the sound of the noisy projector and audience chitchat. Whatever the reason it got started, music remains an essential part of the cinematic experience.

“Ideally, we act as a bridge between the screen and the audience,” Carli says. “It’s very hard to watch a silent film in dead silence.”

That night, Carli watched the film along with the audience. And while his eyes were focused on the screen, his hands reached for the piano keys to indicate conflict or flirtation, and set the pace for slow, moody moments and rapid, exciting action.

Many people think of silent films as a jittery, old scratchy movie of a woman tied to train tracks with rinky-dink piano music in the background — if they think of the music at all. 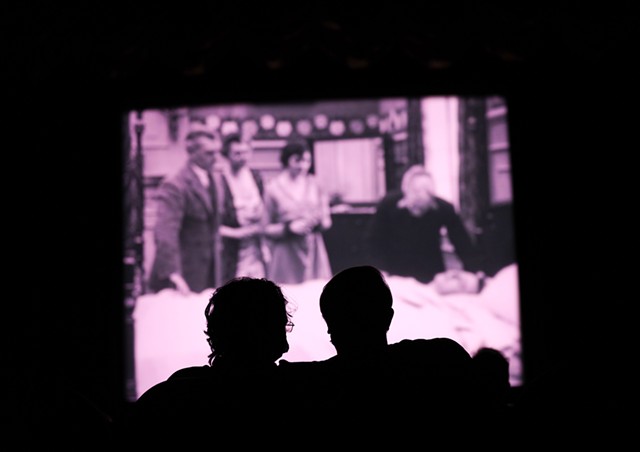 But silent film accompanists are composers — and much of what Carli was doing was composing on the spot. His music grew sinister as a jealous suitor plotted on screen. It was seductive when the heroine was in the thrall of an unhinged physician. His notes ached with trepidation whenever she faced a decision.

“It's strange to be a composer in a genre where the whole idea is for people to not listen to your music that much,” Model says. “It's really about helping a contemporary audience completely lose themselves in the world of the film, and get drawn up and into it.”

Model has known Carli for 18 years. The two got to know one another in 2003 at the inaugural year of Slapsticon film festival in Arlington, Virginia, an event showcasing early comedy films.

The world of silent film accompanists is ultra niche. Model estimates there are fewer than 35 in the country, and many of them have met and worked together, although each approaches their work differently.

Some will watch the film alone and compose the music ahead of time. Some compile a score out of the mood music cues published in trade periodicals from the era, if they are available.

“But if you are playing three or four shows a month for three different films, there's just no way to compose, write out, rehearse, and synchronize that many feature film scores,” Model says. “There’s just no time.” 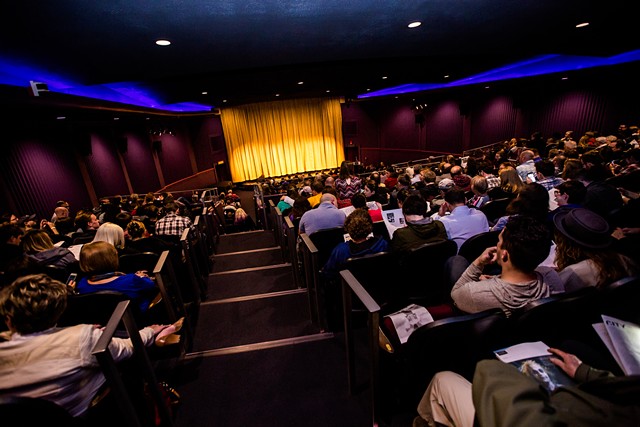 That’s why they improvise, and that’s more often the case than not for Carli. That’s just how he operates. Even when he has accompanied a film several times, each performance is fresh and unrepeatable.

Sometimes, though, the improvisation is done out of necessity because the screening he’s accompanying is the first time he’s seen the film.

That was the situation at the Dryden with “A Sleeping Memory” and in early October in Pordenone, Italy, where he was hired to accompany a newly restored version of the 1925 film “Kentucky Pride” for the Le Giornate Del Cinema Muto (The Days of Silent Cinema) film festival.

Many of the films Carli accompanies are new discoveries or restorations, and their screening may be their first revival after more than a century of dormancy. Each time, he takes his cues from a film that is new to him, as the story unfolds.

Carli, 58, was born in California, and grew up in San Diego. He says his fascination with silent film was sparked as a child when he caught clips of them at Disneyland’s Main Street Cinema.

“I’d spend a lot of time in there, rather than going on the rides,” he says.

He recalls seeing his first silent feature with live musical accompaniment — Charlie Chaplin’s “The Circus” — as a preteen. He began accompanying silent films at 13, when his parents, both deans of community colleges, began hosting screenings at their schools.

“I would pick the films, and I would accompany them,” Carli says. “And that’s how I got a lot of my education, that was my summer job.” 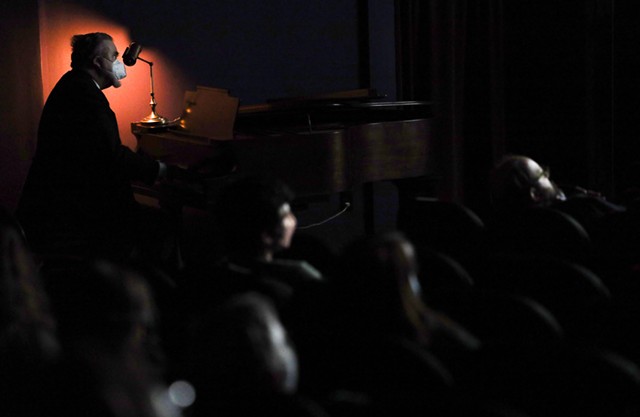 In the intervening years, Carli studied music history and literature, with an emphasis on film history at Indiana University, and earned a doctorate in musicology at the Eastman School of Music. He has recorded his accompaniments for about 140 feature films on home video as well as short films, has taught graduate courses at the University of Rochester, and has composed orchestral scores. He writes articles and programs for film festivals. He also conducts the Flower City Society Orchestra, which performs music from the ragtime era.

While Carli says he doesn’t have a favorite genre of silent film, there certainly are films that are hard to accompany.

“I’ve played films that I strongly disapprove of, but I do my best by them, because you have to,” he says. “If you start commenting on the film, as a musician, that’s like playing behind a singer and giving them the raspberry or making faces at the audience while they’re doing their best to perform.”

He pointed to the 1915 silent epic drama “The Birth of a Nation” as a film that is difficult to accompany. The film was controversial in its day, but has only become more so for its derogatory depiction of African Americans and heroic portrait of the Ku Klux Klan.

In 2015, when The Dryden’s then-programmer, Jurji Meden, planned to screen the film for its centenary with Carli’s accompaniment, Carli hesitated.

“And then I slept on it, and told him, ‘I think we have to show it,’” he says. “One of the reasons is to show how little we’ve progressed, in many ways, since 1915. And the danger of a film like ‘The Birth of a Nation’ is that it’s a very good film, brilliantly made, the acting compelling. You can see why audiences would get swept up in it.”

It is the responsibility of the accompanist is to play true to the intention of the film, but Carli acknowledges that in such cases, “I feel like a surgeon trying to keep a mass murderer alive.”

When accompanying, Carli draws from his well of knowledge about film houses, directors, and actors from the era. And that well is deep. He knows how a particular actor plays the subtleties of a character in a drama, how a particular director speeds through a comedy with physical humor.

He is encyclopedic in a way that makes it easy to understand how he is so good at improvisation, at anticipating what notes and tones to play and moods to convey. Everything he knows seems to be right there, close to the surface.

“Philip is a scholar on many fronts, extremely well read, really well researched, and has an encyclopedic knowledge of music and history,” Model says. “And I think that’s one of the things that informs his playing that I think is special, and could even be said is unique.”

As the resident musician at The Dryden, where he accompanies silent films most Tuesday nights from September through November each year, Carli introduces the film prior to the screening, providing a wealth of context about the story, the filmmakers, and historic events contemporary to when the film was made.

Then, he takes his place at the piano and waits for the gold velvet curtain to rise.