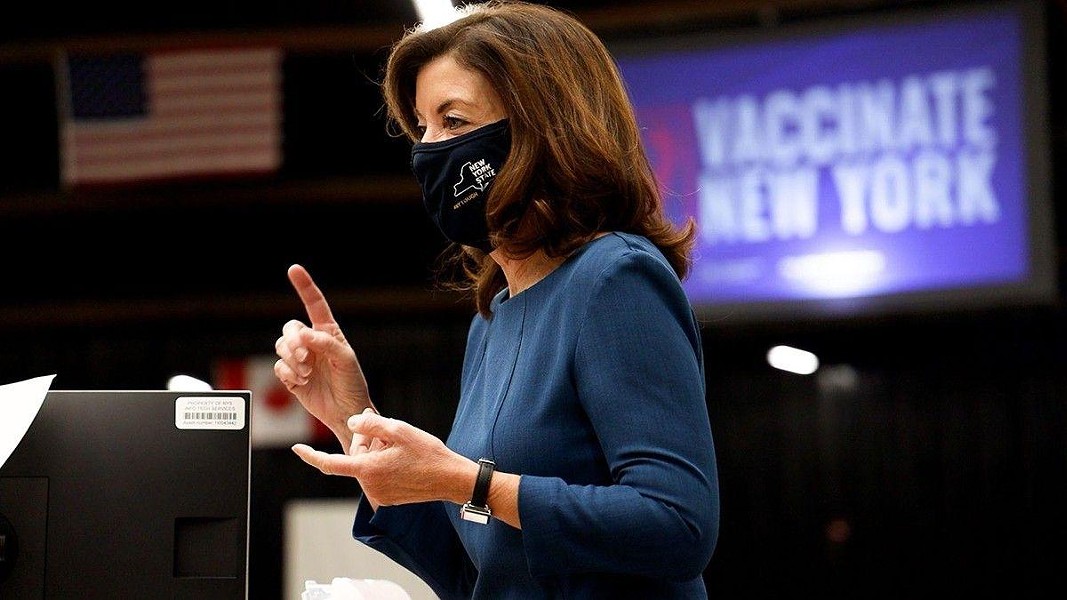 "I agree with Governor Cuomo's decision to step down. It is the right thing to do and in the best interest of New Yorkers," Hochul said. "As someone who has served at all levels of government and is next in the line of succession, I am prepared to lead as New York State’s 57th Governor."

Here’s a closer look at Hochul, the state’s little known but second highest-ranking elected official, who will be New York’s first female chief executive when she replaces Cuomo.

Hochul is not exactly a household name around New York State. The lieutenant governor, in her sixth year in office, has stayed in the shadows, compared to the attention-seeking Andrew Cuomo.

Until recently, her most notable public appearances have been to introduce the governor at the annual State of the State speech and talk up his agenda.

“For nearly a decade, Gov. Cuomo has demonstrated time and again, what skills, experience and bold leadership can deliver,” she said at the governor’s address in January 2020.

But Hochul, known for her warm and upbeat personality, is a successful elected official in her own right. In 2011, she won a special election for a congressional seat and held it for 18 months until her defeat to the now-disgraced Chris Collins. And she has a solid core base of supporters in western New York.

Hochul’s grandparents emigrated from Ireland. Her father, a former steelworker in Lackawanna, rose to head his own information technology company. Her mother stayed at home to raise Hochul and her five brothers and sisters.

Hochul attended Syracuse University and received her law degree from Catholic University. Her husband, Bill, also a lawyer, is the former U.S. Attorney for the Western District of New York.

After law school, she worked in Washington for New York elected officials, including former Sen. Daniel Patrick Moynihan. But she had to quit when she found the hours conflicted with looking after her small child. She shared the experience in an interview with public radio and television last August.

“I loved my job, but the hours were crazy,” Hochul said. “We literally pulled all-nighters when they were in session. You have a child, there’s nobody to watch the kids.”

She moved back to Buffalo, had another child and eventually ran for town council in the suburb of Hamburg. Fourteen years later, in 2007, she was elected as Erie County clerk.

Hochul, a lifelong Democrat, at the time was more conservative than liberal. She vocally opposed then-Gov. Eliot Spitzer’s efforts to grant driver’s licenses to undocumented immigrants, saying that if they tried to apply, she’d call the sheriff to bring them in for questioning.

And when she ran for Congress in 2011, the National Rifle Association endorsed her.

Hochul has since changed her view on the driver’s licenses; she supported a law backed by Gov. Cuomo to allow undocumented immigrants to apply for them. And she split with the NRA over the issue of school shootings.

In 2014, the state’s then-Lt. Gov Bob Duffy, the former mayor of Rochester, declined to seek reelection, saying back problems prevented him from continuing a busy travel schedule. Cuomo chose Hochul as a replacement.

She picked up the travel duties with enthusiasm, often attending five or six events a day, from Buffalo to New York City. They ranged from promoting Cuomo’s state budget plan at a local chamber of commerce meeting to a Black History Month commemoration.

Hochul has also been an avid participant in a series of sporting contests that Cuomo has held to promote tourism, including the Adirondack Winter Challenge, where she broke her wrist and several ribs while attempting a ski jump. She recounted the experience at a meeting of the Common Ground Alliance in Long Lake, recorded by North Country Public Radio.

“I just missed the airbag completely,” Hochul said to laughter. “I want to tell you that the quality of health care in the North Country is really good.”

The years of campaign-style appearances earned her a wide array of allies in every corner of the state.

In 2018, when Cuomo, indicated that he might want Hochul off the ticket — suggesting that she might want to try again for her former congressional seat — Hochul asserted herself.

She called a series of journalists into her private offices outside the Senate chamber to signal her intentions, and then made clear that she intended to run for a second term as lieutenant governor.

“The governor and I are running together,” she said.

Hochul has held a slim portfolio during her years under Cuomo, although she did notably lead the governor’s “Enough is Enough” campaign to combat sexual assault on college campuses.

For the past year, during the COVID-19 pandemic, Hochul has continued her presence at political and community events across the state, virtually. But Cuomo has kept her at arm’s length from his management of the crisis. She has attended only a handful of the more than 200 public briefings the governor had held on the virus, and she is not one of his inner-circle decision-makers.

Hochul, who declined to be interviewed for this story, tried for months not to be drawn into the scandals surrounding the governor.

But after the attorney general’s report that was released on August 3, Hochul said, in a statement, that “the Attorney General’s investigation has documented repulsive and unlawful behavior by the Governor towards multiple women. I believe these brave women and admire their courage coming forward.”

“No one is above the law,” she added.

Hochul added that she couldn’t comment further because she is next in the line of succession for governor, an ascension will soon happen.