By David Andreatta and Rebecca Rafferty

PHOTO BY MAX SCHULTE / WXXI NEWS Painters depict a young John Lewis in the mural "I Am Speaking," at 49 State St. in downtown Rochester.
The administration of Mayor Lovely Warren on Thursday unveiled plans to create a new “arts equity fund” aimed at ushering in “a bold new era of public art in Rochester.”

The plan was announced during an unconventional State of the City address in which Warren did not deliver a speech, but rather released a short video and a 48-page booklet that outlined her vision for the city through a lens of “equity and recovery.”

Her vision comes amid a pandemic that has decimated the bottom line for artists and arts organizations and a nationwide reckoning on matters of racial justice.

Arts groups in and around Rochester, particularly small organizations that serve more racially and economically diverse audiences, have been clamoring for years that public funding for their endeavors is shallow and inequitable.

News of the fund followed a CITY investigative report that explored the disparate and meager public offerings made to arts organizations every year. The result, small groups say, is a two-tiered system of haves and have-nots.

Details on the arts equity fund were scant, as they often are in sweeping policy documents, but the vision made clear that the fund would pay for arts projects that “inspires us to work together to achieve equity,” including public sculptures, performance art, murals, and the written word.

The fund would be financed by the city setting aside 1 percent of the cost of capital projects for infrastructure that exceed $1 million, an amount the Warren administration estimated would generate “hundreds of thousands of dollars annually.”

Overseeing the money and its distribution would be a city arts commission, a panel that most cities have but that has been absent in Rochester for decades. Warren’s State of the City literature read that her administration would hire a consultant to “help us convene a broad section of our arts community to determine the structure of the commission.”

“This is critical to elevate artists and voices who have not been traditionally supported financially as another step on the path to equity,” the literature read.

The financing appears to play off a “percent for art” ordinance that was adopted in 2007 but never fully implemented. 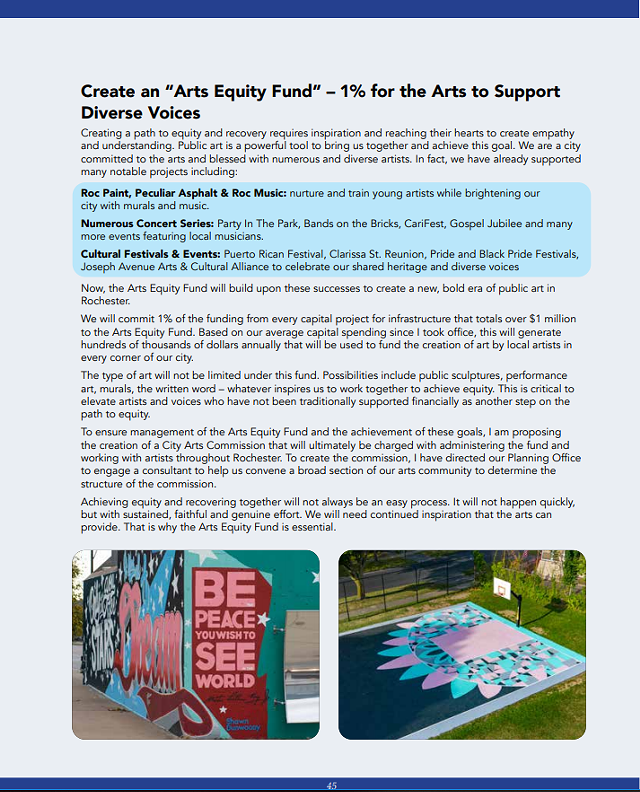 Like many “percent for art” ordinances in cities and counties across the country, that law required the city to allocate 1 percent of the cost of capital improvement projects in excess of $1 million to funding “public art.”

The law was to take effect in 2009, but that year the city acknowledged in legislation amending the law that it had no money to commit to public art and that putting 1 percent aside for art was “a goal.” There is nothing to suggest that goal has ever been met since.

Word of the mayor’s vision was met with a blend of excitement and cautious optimism in arts circles. Many artists had questions yet unanswered about the makeup of the commission and what criteria it would use to administer funds to worthy projects.

While all applauded the notion of more money being funneled to the arts, many seized on the idea of the commission acting as a voice and liaison between the arts community and City Hall.

“It’s not just about funding for the arts, it’s about advocacy,” said Thomas Warfield, a singer and theater and dance professor at the Rochester Institute of Technology who has been advocating for an arts commission for three mayoral administrations.

“That only happens through allowing the arts to have a voice in the decision making of what goes on in the city and in the region — sitting at the table along with business and health and education,” Warfield said.

Artists and arts organizations have consistently complained that a hurdle to obtaining public funding is simply knowing who or what office to turn to in city or county government.

“Many of us in the arts community have been concerned that there isn’t a clear process for arts organizations to apply for support from the city of Rochester,” said Bleu Cease, director of the Rochester Contemporary Arts Center.

Cease helped spearhead the city’s percent for arts legislation that was adopted in 2007 and fell dormant two years later.

“It didn’t do much,” he said. “I’ll be watching for important details this time around.”

Cease said a fund that draws from city-funded projects as well as private construction projects — as some percent for art funds do, often to the dismay of private developers — “could be a major step toward providing sustainable support for the arts in Rochester."