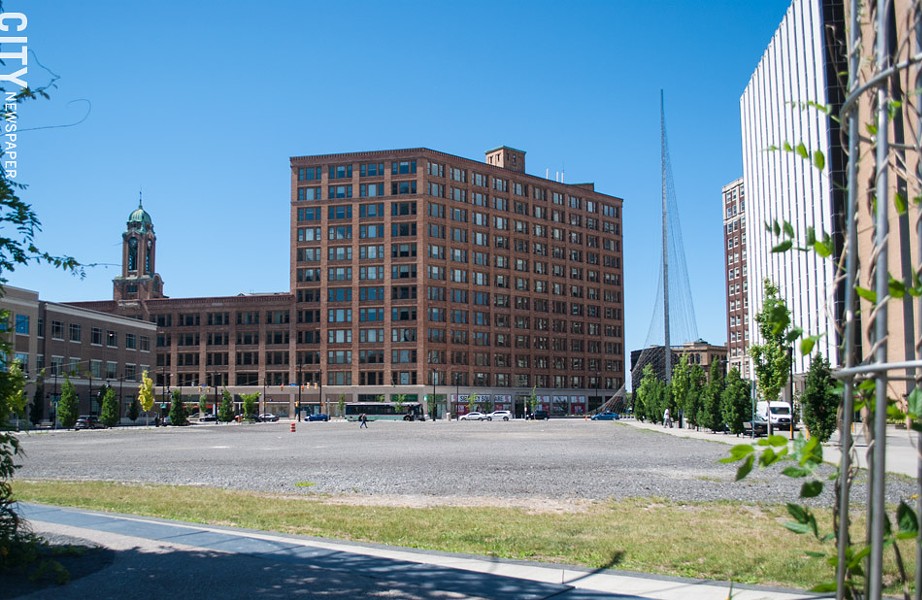 FILE PHOTO Midtown’s Parcel 5 hosts the Jazz Fest and the Fringe Fest. City officials are eyeing it as a year-round event site.

City Council will vote on July 23 on a request for $4.7 million in state funds to create an enclosed entertainment venue at Midtown's Parcel 5.

The Warren administration is considering transforming much of Parcel 5 into a Rochester version of Kansas City Live!, a block-long, covered complex that hosts concerts, major sports broadcasts, and other events year-round. On its sides are two-story structures housing bars and restaurants.

The request for Parcel 5 funding is one of 14 projects the mayor wants to submit through the state's Consolidated Funding Application process. Also on the list are Bulls Head revitalization planning and preservation work on the Mt. Hope Cemetery chapel and Rundel Library.

Despite the request, the city's discussion of an entertainment complex at Parcel 5 is still in the early stages, city spokesperson Justin Roj says. The deadline for applying for the next round of state CFA funding, however, is July 26, and the city wanted to get its application considered in case it decides to go ahead with the project, Roj said.

City officials estimate the total cost for a local version of Kansas City Live! at $23.5 million. The rest of the funding would come from local sources.

Mayor Lovely Warren, members of her administration, and several local business and community representatives visited Kansas City Live! in December and have been enthusiastic about the possibilities for Parcel 5. But so far, no formal plan has been proposed, and Roj said there will be an extensive community engagement process if the city pursues the development.