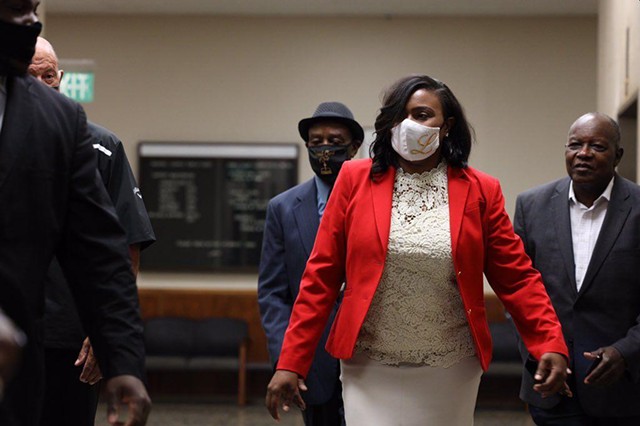 Rochester Mayor Lovely Warren pleaded not guilty Wednesday to charges including criminal possession of a firearm, which is a felony, and misdemeanor counts of endangering the welfare of a child and failure to properly secure firearms in a dwelling.

Warren was arraigned in a Monroe County courtroom along with her estranged husband, Timothy Granison, who faced the same charges as Warren. Granison also pleaded not guilty and both he and Warren were released following the court appearance.

The pair were charged in an indictment that was unsealed by a judge on Friday.

Granison’s attorney asked the judge to dismiss the charges. He said he was notified by mail last week that Granison could testify, but the indictment was announced the day he received that notice. The District Attorney's Office said that it didn’t receive written notice that Granison wanted to testify.

The charges stem from a May 19 raid on Warren's Woodman Park home, which at the time she shared with Granison, from whom she is legally separated. Police have said that during the search they found a handgun and a semi-automatic rifle. According to the indictment against Warren and Granison, the criminal possession of a weapon charge relates to the handgun, while the charges of failure to properly secure firearms deals with both guns.

The search of the mayor's house was the result of an extensive, seven-month sting by law enforcement agencies into what prosecutors have called a mid-level drug ring. Granison was one of seven people charged as a result of that investigation. An indictment accused Granison of selling powder and crack cocaine and of criminal possession of a weapon.


Granison previously pleaded not guilty to those charges, and there was no indication that Warren was involved in the alleged drug operation.

But authorities have said that the raid and a months-long investigation leading up to it turned up two unsecured guns and an unregistered pistol in their home, in which Warren's and Granison's 10-year-old daughter was left alone.

Warren is scheduled to face trial in September on campaign finance fraud allegations.