October 02, 2020
Mayor Lovely Warren and two of her political associates, one of whom is the finance director for the city of Rochester, have been indicted on felony charges connected to campaign finance violations alleged to have occurred during Warren’s 2017 re-election run, the Monroe County District Attorney’s Office made public on Friday.

The three of them face two charges, including illegal coordination between political committees for the purpose of evading donor limits and participating in a scheme to defraud in the first degree.


Both are classified as nonviolent Class E felonies, which carry penalties that range from no jail time, to probation, to up to four years in prison.

The associates indicted with Warren include Albert Jones Jr., who was Warren’s campaign treasurer, and Rosalind Brooks, who was the treasurer of a political action committee created by Warren called Warren for a Strong Rochester. Brooks, who also goes by Rosalind Brooks-Harris, is the city’s finance director.

They are scheduled to be arraigned on Monday in Monroe County before a Cayuga County judge, who will preside over the case.

The charges were handed up by a grand jury Friday that two weeks ago heard evidence in a case brought by District Attorney Sandra Doorley, who was acting on the recommendation of a scathing state Board of Elections investigation.

That probe concluded in a 35-page report, forwarded to Doorley in March, that, “Considerable evidence supports a finding that Lovely Warren, Albert Jones Jr., Rosalind Brooks . . . and others engaged in a scheme to evade contribution limits.”

In releasing the indictment during a news conference at her office, Doorley recognized the significance of charges being filed against a sitting mayor, and took pains to say that the case against Warren would proceed appropriately.

"We are here to be transparent and upfront with the people of Monroe County," Doorley said. "We are not here to conduct a trial in the media."

"Lovely Warren is still the mayor of the city of Rochester and mayoral business needs to continue," Doorley added later. "I don't want to disrupt that and I want to continue in our community."

A spokesperson for the mayor, Jessica Alaimo, referred questions on the matter to Warren's lawyer, Joseph Damelio. 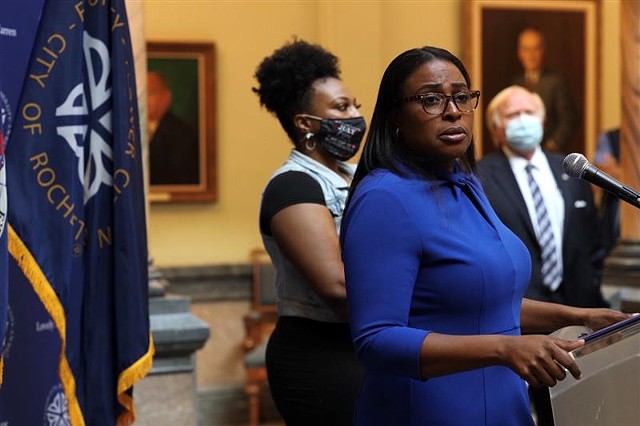 Damelio, a defense attorney who has been representing Warren throughout the investigation into her campaign finances, said she is innocent of the charges.

The charges come at a precarious time for Warren, whose administration has been under siege for a month over its handling, and mishandling, of the death of Daniel Prude. Local activists have called for her resignation and national media have questioned her leadership.

Prude was suffocated by Rochester police during a mental health arrest in March and died a week later, although the matter was not publicly disclosed until a lawyer representing his family brought it to light in September.

Warren has said she did not know the true circumstances of Prude’s death until August, and that she was barred from publicly discussing the incident by a state law that compelled the state attorney general to investigate the case. State Attorney General Letitia James has sharply rejected the mayor’s rationale for keeping Prude’s death a secret.

A 325-page dossier compiled by her deputy mayor, James Smith, ostensibly to bolster the mayor’s justification for her actions and to insulate her from criticism, laid out in detail how the highest levels of the Rochester Police Department worked to massage the circumstances of Prude death and keep word of it from getting out.

Shortly after the indictment was released, City Council President Loretta Scott issued a statement saying she was "obviously saddened by the news" but stressed that it would be business as usual at City Hall.

"I believe in due process and that everyone is innocent until proven otherwise," Scott said. "I want to assure the community that the business of the city will continue uninterrupted."

The indictment of Warren, Brooks-Harris, and Jones did not detail what specific actions they allegedly took to lead prosecutors to believe they had committed crimes.  But reportage over the years suggests the case hinges on transfers of funds between Warren's campaign committee and her political action committee.

Assistant District Attorney Jacob Ark at one point said, "We are alleging that the entire political action committee itself was fraudulent."

Michael Schiano, an attorney for Brooks-Harris, who oversaw the political action committee, said his client was innocent of the charges.

"We will fight this to our fullest extent," Schiano said. "My client is not guilty of these allegations."

The donation limit in the 2017 mayoral election cycle was $8,557, but records show that Warren for a Strong Rochester had transferred $30,000 to Friends of Lovely Warren.

The laws prosecutors cited in bringing the charges against Warren were Section 14-126 of the state Election Law, which prohibits coordination between campaign committees and political action committees “for the purpose of evading contribution limitations,” and Section 190.65 of the state Penal Law, which references a “systematic ongoing course of conduct with intent to defraud.”

The transfer, and others that were recorded in campaign finance filings on record with the state Board of Elections, were flagged as problematic by Democratic primary opponents of Warren’s, namely James Sheppard, a former county legislator, and Rachel Barnhart, a current county legislator who was seeking office at the time.

Warren and her spokespeople explained at the time that the transfers were an awkward attempt to correct a clumsy clerical error committed by volunteers of her campaign and the political action committee using the electronic payment system PayPal.

Barnhart on Friday called the charges the result of "a corrupt pay-to-play culture" in Rochester politics.

"This is very sad and will plunge our city into further crisis," Barnhart said. "We have to understand, however, why this is happening. Campaign finance laws exist to protect our elections and make sure there is transparency. The magnitude of these violations is nothing short of cheating.”

Prosecutors presented evidence in the case to a grand jury on Sept. 17, although there were news reports in the preceding weeks that a case was being built against the mayor.

Damelio said the charges against Warren require an intent that he said was not there.

"Both of these charges . . . there is an intentional requirement, meaning you had to have done these acts and committed these acts with the intent to do it," Damelio said. "With regard to the Election Law would be knowingly and willingly circumvent the Election Law. That's certainly an issue in this case and that will certainly be a trial issue."

Doorley said she expected a trial to be months away. Damelio, noting that Warren has signaled her intent to run for re-election next year, said he hoped the litigation could be expedited.

Warren has called the allegations “a political witch hunt” and suggested they were timed to her campaign for a third term in office, which she said she intended to launch in January.

Doorley addressed that charge in her comments to reporters.

"This is not political," Doorley said. "I am the chief law enforcement officer for Monroe County. I was presented with an investigation, I review  the facts, my team presented it to a grand jury as we would any other case and the result is the indictment that we are handing down today."

"It is not political," she added. "I am simply doing my job."