PHOTO BY MAX SCHULTE Hundreds of demonstrators gathered Sunday night at the Jefferson Avenue intersection where Daniel Prude was arrested and suffocated. They marched to Rochester Police Department headquarters. Sept. 6, 2020.
Hundreds of demonstrators converged on the headquarters of the Rochester Police Department for a fifth consecutive night Sunday amid  mounting calls for Mayor Lovely Warren and Police Chief La'Ron Singletary to resign over their handling of the death of Daniel Prude.

Upward of 500 protesters marched for more than a mile from the intersection where Prude was arrested on Jefferson Avenue to the Public Safety Building on Exchange Boulevard, where police in riot gear were waiting for them behind metal barricades. As many as a few hundred more joined the demonstration as the night wore on.

The demonstration and police response were markedly subdued relative to the clashes of previous nights, following pledges by Mayor Lovely Warren and clergy to employ a "buffer" of "elders" between the two sides. As of Monday morning, the demonstration ended peacefully with no reports of arrests or injuries.

Several dozen "elders" waited for more than two hours outside the Public Safety Building for the throngs of demonstrators to arrive around 9:40 p.m. Many of the protesters wore helmets and carried umbrellas and makeshift shields in anticipation of pepper ball fire, which police had deployed seemingly indiscriminately during previous gatherings.

"My question is what are we a buffer for?" asked Hanif Abdul-Wahid, 67, who was among the "elders." "Are we going to stop a bullet? Are the police still going to have the riot gear and the chemical weapons and the dogs like it's the 1960s?"

Speaking to about 60 "elders" who answered a call from Warren and the Rev. Myra Brown of Spiritus Christi Church to stand with protesters prior to the demonstrations, the mayor said she spoke with Singletary about police standing down.

“We look forward to a peaceful night," the mayor told elders at Spiritus Christi Church, where they had assembled prior to the demonstration. "I’ve spoken to the chief about standing back.. . . . We want our citizens to be able to peacefully protest.”

Warren said she would not join the demonstration.

“We are paying theses people to terrorize our community” Danielle Ponder at protest in front of RPD PSB @maxrocphoto @david_andreatta @roccitynews pic.twitter.com/HkqCN3TBVR


City Council President Loretta Scott did join the protesters and at the church put the mayor on the spot, saying, "We are counting on you, mayor, we are counting on the chief, to get the officers under control."

"We can go as elders and all that, but we shouldn't have to stand between the people and the cops," Scott said to applause.

City Council has indicated it will use is subpoena power to gather information about the Warren administration's handling of Prude's death, particularly why the mayor kept it from the public for five months.

Earlier in the day, a defiant Warren said at an afternoon news conference that she would not step down and that she was committed to working with the new Racial and Structural Equity (RASE) Commission, a creation of the city and Monroe County, to re-envision policing in Rochester, and specifically responses to mental health crises.

Police have become more aggressive in their crowd control methods with each passing night of growing demonstrations, deploying chemical irritants with greater frequency and firing pepper balls at protesters at close range.

"The deployment of pepper balls, tear gas, the fireworks and agitators have escalated these situations," Warren said.

"That is the reason why I'm asking you, the citizens of Rochester to help us," she added, referring to her call for "elders" to join the demonstration. "They will stand as the buffer between our protesters and our Police Department."

The Warren administration issued a statement shortly after the news conference to clarify the mayor's use of the word "elders," whom it said were "respected community leaders and not necessarily 'senior citizens.'"

Protesters and clergy clashed late last week at the First Church of God on Clarissa Street during what was billed as a "community conversation" about Prude's death that featured the mayor, the police chief, and several members of City Council.

The protesters there complained that church leaders who professed to fight for the advancement of people of color have done little to help in recent years and were overly cozy with political leaders. The shouting by demonstrators escalated to the point that Singletary left the event. 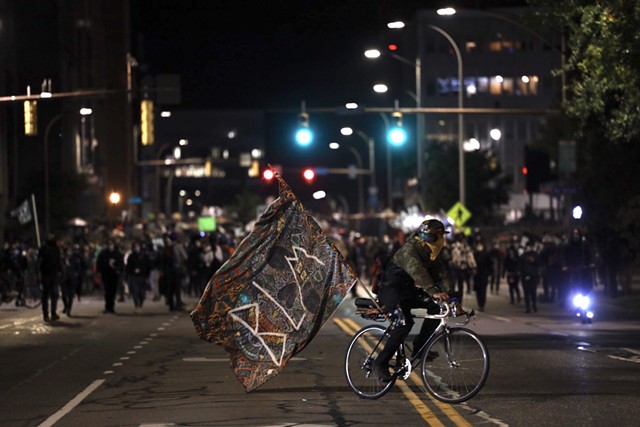 But the demonstration through the first two hours Sunday night was relatively uneventful. Much of the crowd sat down in the street, with a few bringing folding chairs to stake their spot. Some organizers of the event distributed bottles of water.

At times the crowd broke out into chants of "Black lives matter" and "Daniel Prude," and "Why are you in riot gear? We don't see no riot here!"

Indeed, "elders" were told by Brown, the pastor at Spiritus Christi, that police would be in standard uniforms. But police at the scene and on top of surrounding buildings and highway overpasses were in riot gear.

"We should not be encountering any police in riot gear," Brown told the "elders."

Both Warren and Singletary were questioned Sunday by reporters about the timeline they have offered the public as to their knowledge of Prude's death and their handling of it.

Warren has said Singletary told her that Prude had overdosed, suggesting that she may have been misled.

She backtracked from that somewhat Sunday, saying that Singletary first contacted her about Prude around 7 a.m. on March 23, a few hours after Prude fell unconscious and stopped breathing while under arrest and restrained by police. Prude did not die until March 30.

Singletary defended his actions, saying, "What I did was I provided factual information based on the incidents I had at the time."

State Attorney General Letitia James has rejected the mayor's contention that a governor's executive order that gave jurisdiction for an investigation into Prude's death to the attorney general hamstrung her ability to speak publicly about the matter and the city's ability to launch its own investigation.