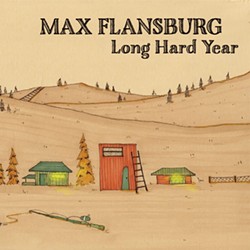 Multi-instrumentalist Max Flansburg has become a fixture of the Finger Lakes’ vibrant Americana scene in recent years, most notably as the frontman of the Canandaigua bluegrass band Dirty Blanket. On his debut solo album, “Long Hard Year,” self-released on Aug. 27, Flansburg puts his singer-songwriter chops front-and-center.

And although he’s a skilled guitarist capable of navigating dizzying bluegrass licks, it’s the strength of Flansburg’s singing voice that steals the show on the eight tracks recorded at Aaron Lipp’s Temple Cabin Studios in Naples.

Flansburg sings in a welcoming, easy-going country drawl, and the certainty with which he sings about uncertainty is a strange comfort.


On “Rainforest Song,” he recalls a fast-moving romance in a deep and honeyed baritone voice that possesses the burnished wisdom of a songwriter twice his age. On the superb country shuffle “St. Anne Marie,” a song about nostalgia and lost love, the sounds of a dobro and lap steel lend a lonesome, bluesy feel, as Flansburg sings, “Left her waiting at the station by the hourglass of sand, everything looks blurry when you’re heartsick with a suitcase in your hand.”

“Long Hard Year” succeeds as a collection of first-rate original country songs, but Flansburg also shines when interpreting the musical work of others. His inclusion of the Grateful Dead song “Liberty” on the record is inspired, especially because the lyric “If I was a bottle, I’d spill for love” is the most country-sounding thing I’ve ever heard. “Warm Beer & Cold Red Wine” — written by Jon Itkin of the Rochester band The Crooked North — sounds like a classic country tune in the making, featuring Lipp’s on-point fiddle-playing and Flansburg’s skill on the pedal steel. The song also prescribes a healthy dose of wry, cynical humor.

“If I was ever less than decent, if I ever was untrue, that was the Bible talkin’, baby — now you know what it makes me do,” Flansburg sings. “Give me something sweet and strong, give me back what’s mine — not warm beer and cold red wine.”


Although the title song is introduced on the opening track, with a full-band aesthetic that recalls the rock and soul of the ’60s, it sounds like an anomaly compared to the album’s other tracks. The reprise of “Long Hard Year” as an acoustic bluegrass song better fits the stylistic milieu of the record as a whole.

Lipp recorded, produced, and mixed the record, and it shows in the crisp, high definition sound. The instruments and voices sound clean and close by, as if the listener is hearing the various timbres unfiltered by technological tampering. Although the album is available only on CD and digitally, the production — with its use of Schoeps condenser mics — makes me want to hear it with the warm, subtle crackle of vinyl.