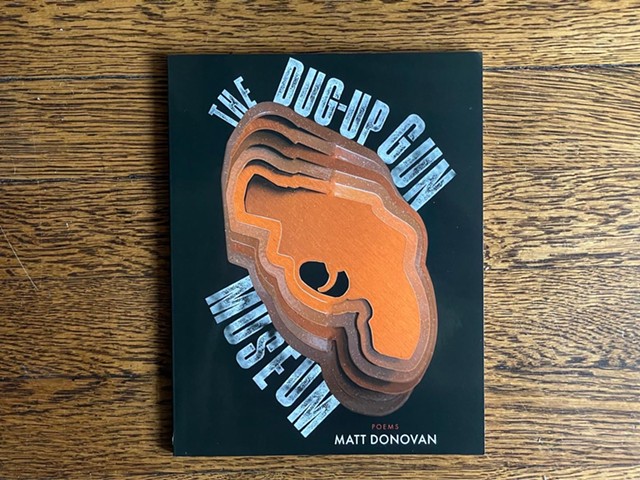 “The Dug-Up Gun Museum” is not your typical poetry book peppered with reflections of the past and personal loves and losses.

The collection by author Matt Donovan — to be published by the Rochester press BOA Editions on Nov. 8 — questions America’s collective preoccupation with guns and the cycle of gun violence that dominates national headlines.

…Here we are again, inevitable as the click’s tick, looking in on a place that now will never be young again. Is there a way to say it — There’s been a shooting — that will allow it to be heard, remembered

& heard, without the easy glide of our past tense? That will stop us from wanting to turn to anything under the wide starry sky that is not the green fire burning in the minds of those men or the green

of a blanket America provides & provides without change?

Peter Conners, BOA’s publisher and executive director, said he was drawn to the rare subject matter.

“I’ve never seen someone do a book about America's obsession with guns in poetry before,” Conners said.

The project didn’t start out as poetry, however. Donovan initially envisioned a book of journalistic prose. When that idea fell through, he was left with a surplus of interviews and images he couldn’t shake from his mind, and poems emerged instead.

It might be tempting to cast his work as anti-gun. But that’s not how Donovan sees his book.

“I see this book as a portrait of America through the lens of guns much more than an anti-gun book,” Donovan said.

To paint his portrait, Donovan traveled across the country interviewing a wide range of people, from gun shop owners to parents whose children were killed in shootings. He participated in a war simulation using Airsoft guns at Fort Hood, and worked as an “embedded reporter” in a paintball gun D-Day reenactment.

“In a time of incredible polarization, and when we tend to get our information in an echo chamber and just hear those like us, it’s almost a bold statement just to go out into the world and engage in conversation with people who hold different views from you,” Conners said.

Donovan was inspired in part by the work of author Erika Meitner, whose poetry book “Holy Moly Carry Me” addresses gun culture in the context of a Jewish family living in an Evangelical community in Appalachia. She referred to the pieces in “The Dug-up Gun Museum” as “documentary poems.”

In “The Dug-up Gun Museum,” Donovan offers no solutions to combat gun violence. But empathy for his subjects is woven throughout the work.

“I think it’s easier for people who don’t own guns and might be politically on the left side of things to vilify gun owners,” Donovan said. “And to my mind, that is worse than a non-starter in terms of engaging with the issue, and that just contributes to more misgivings and failures to communicate.”

Writers & Books presents a free online event via Zoom on Nov. 7, featuring a conversation between Matt Donovan and Peter Conners. Go to wab.org for more information.

Daniel J. Kushner is CITY's arts editor and can be reached at dkushner@rochester-citynews.com.