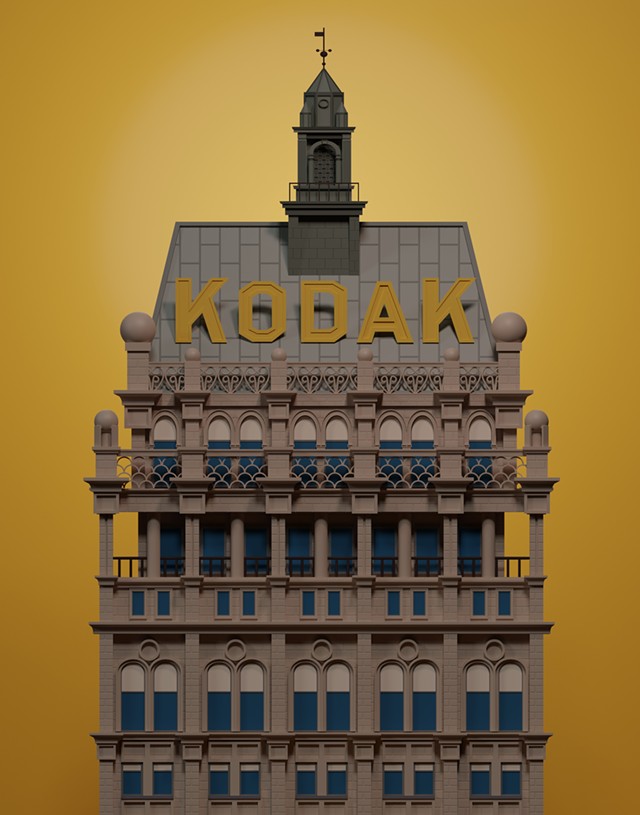 The first time I saw images of Mathison Rust’s replicas of iconic Rochester buildings like The Little Theatre and the Kodak Building on Instagram, I didn’t recognize them as detailed digital illustrations and mistook them for physically-constructed miniatures.

I wasn’t the only one. Rust says it’s common for people who stumble on his Instagram page to think his works are dioramas. That’s in no small part due to the subtle details — the variations of color in bricks, the just-so lighting and shadows, and the perfectly matched Pepto-pink of The Cinema Theatre.

“I've actually been dinged a couple times by people who are interested in the work, and then disappointed that they weren't actual models,” Rust says.

But the work that goes into his digital creations is no less impressive.

His first illustration was his depiction of Nick Tahou Hots, home of the Garbage Plate and a former railway terminal on West Main Street. He drove by the imposing, castle-like structure often and saw in it a textural depth. His meticulous illustration depicts the building isolated, sidewalk and all, in a vacuum of midnight black. Lights from within beckon weary travelers with the promise of a greasy indulgence.

Rust breaks the illusion of realism in some of his illustrations with animation, including a “revolving” image of the First Federal Plaza (the downtown building with what looks like a UFO on top), and the water flowing through Martin Luther King Jr. Memorial Park. The protester holding a “WE CAN’T BREATHE” sign in the latter is a nod to the demonstrations that took place there last year.

Not all of Rust’s scenes are of landmark buildings. His depiction of Brown’s Race, a street that runs parallel to the river at High Falls, truly captures the mood of the space at night — the sparkling promise and potential energy of an all but abandoned strip, simultaneously vibrant and desolate. His treatments of each spot he illustrates are infused with a blend of true-to-life grittiness and spatial ambiguity, like a magical realism film set.

“That's really what I'm going for — everything is imbued with a pretty deep affection,” he says. “What makes Rochester such a special place to me is that deep history and in every single crack and weathering of the facades, which I think is worth capturing in this particular medium.”

And for Rust, his toy-scale digital models harken back to childhood. 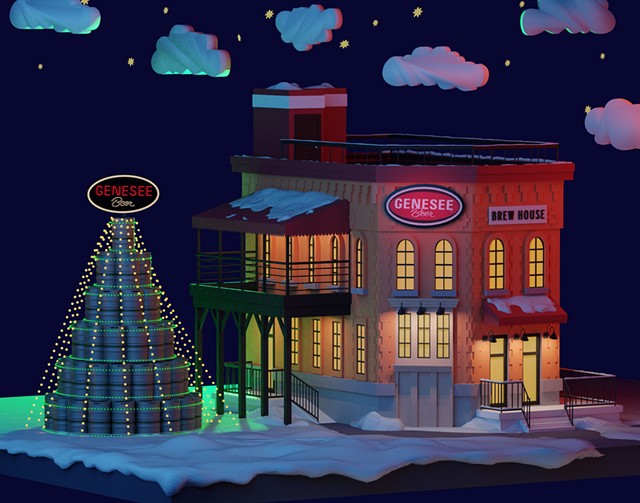 “When we're children using toys, we’re natural storytellers,” he says. “We have very limited worlds, so we set up these tiny doll houses and we make sense of the world around us with our imaginations. But we tend to lose that once our world grows and we become the main character ourselves.

“So, I really want to create these scenes of these places where we're used to being the main character,” he goes on. “And then suddenly giving people this bird's eye view, because I think it takes that and it reconnects us to that childhood curiosity that we used to have.”

Perhaps what is most impressive about his work is that Rust is a self-taught artist. He grew up in Western New York and studied music and anthropology at SUNY Geneseo before moving to Rochester in 2005. Art has always been a crucial element of his life, Rust says, and he avidly draws, paints, and creates in ceramics, wood, and other materials.

“I got into computer graphics about four years ago,” he says. “I was dabbling in some game development, just for fun, and I really wanted to develop my own resources and assets,” he says, referring to the environments and objects of the “worlds” in video games.

In early 2019, Rust decided to make prints of his illustrations and show them at some local art festivals, to gauge public interest in what he was making.

“And I got a really nice reception there,” he says. “So I started the Instagram page shortly after that.”

He’s since taken commissions for digital illustrations, mostly of house portraits, including one of the childhood home of another local artist.

“I think that same magic applies when people see their childhood home or their first house or first apartment, things like that,” Rust says. “I want to enable people to have access to that.”

Revel in the details is an ongoing series by Rebecca Rafferty, CITY's life editor. She can be reached at becca@rochester-citynews.com.