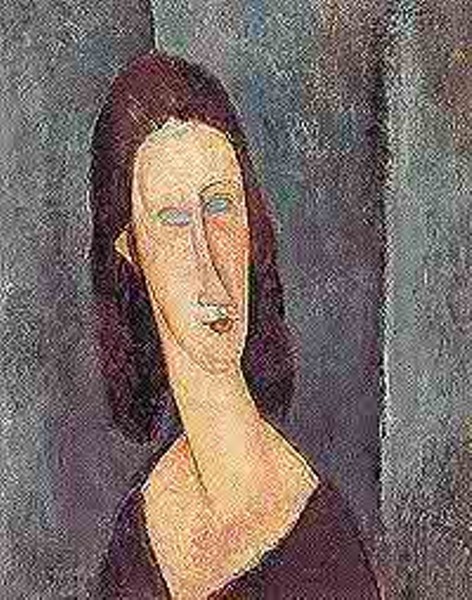 Modigliani was a noisy drunkard, a passionate womanizer, a hashish eater, a lousy singer, a boisterous poet. He died tragically young, aged 35, an impoverished and unrecognized artist. Such is the legend. Kenneth Wayne, the curator of Modigliani and the Artists of Montparnasse at Buffalo's Albright-Knox Art Gallery and author of the accompanying catalogue, seeks to move beyond this myth by concentrating on "facts and analysis."

It is an old complaint that tales of Modigliani's bohemian exploits have overshadowed serious consideration of the man and his art. In the forward to his 1966 biography, Pierre Sichel wrote that he had "tried to show that Modigliani was much more than the monstrous masquerade character romantic legend makes him." The reminiscences of those who knew him cannot always be trusted, and there is little documentary evidence.

Modigliani himself left us his paintings, some sculptures, and many hundreds of drawings. They usually depict people, and you'll wish they could talk. But their characteristically stylized features --- elongated necks, blank staring eyes, and tightened lips --- evoke an almost sphinx-like inscrutability.

Wayne has spent the last 15 years gathering every available scrap of information on Modigliani, putting together an impressive body of data in an effort to dispel the myths surrounding the artist. He is particularly eager to prove that, contrary to legend, Modigliani actually enjoyed considerable success. He has managed to unearth details of many previously unrecorded exhibitions, bringing the total number up to 18.

These were in Paris, London, New York, and Zurich. So Wayne concludes that Modigliani "was an internationally known artist." But it seems clumsy to equate "internationally exhibited" with "internationally known." All but one of his exhibitions were group shows. Even the solo, in 1917 at Gallerie Berthe Weill in Paris, seems to have been something of a failure. It was closed, either temporarily or permanently (it is unclear), by the police on its first day because the nudes sporting pubic hair were deemed indecent.

To compare Modigliani to Van Gogh, the classic "peintre maudit" or "cursed artist," is an exaggeration. But Modigliani's level of success bears even less resemblance to that of Matisse or Picasso, who won enormous fame and fortune during their own lifetimes. What emerges is a sense that Modigliani was right on the cusp of greatness when he died in 1920. He could have been a contender.

That is the real tragedy upon which his biographers have fed. And why not? What is ultimately so moving about viewing many of Modigliani's works is the knowledge that time was short for this artist. And he was not unaware of it. From the age of 16 he had suffered from intermittent bouts of the disease --- tuberculosis --- that was to finally kill him. It is not hard to imagine that his increasingly self-destructive behavior resulted from a growing perception of his own impending doom.

Wayne criticizes those who focus on such biographical details in favor of "the more substantive issues of meaning, style, influence, and the interpretation of his art." But most of Modigliani's pictures are portraits, so it's tempting to speculate on the sitter's relationship with the artist. How, for example, are you supposed to look at a 1917 picture like Blue Eyes (Portrait of Madame Jeanne Hébuterne)? She was his lover and the eventual mother of his child. When Modigliani died, three years after painting this picture, Hébuterne was nine months pregnant with their second child. But two days after his death she followed him, jumping out of their fifth-floor apartment window.

Perhaps the story is irrelevant to an appreciation of this particular picture, as the events occur some time after the paint was dry on the canvas. Perhaps my retelling of it reeks of sensationalism. For me it's simply a case of the more you bring, the more you get. But if I had to chose between such statements as Wayne's "Modigliani's interest in tone may owe something to both Whistler and Ensor" and Sichel's "although he had a chronic cough, he continued to smoke cigarettes heavily. Sometimes he coughed up blood," I'd take the latter --- in all its gory and unverifiable detail.