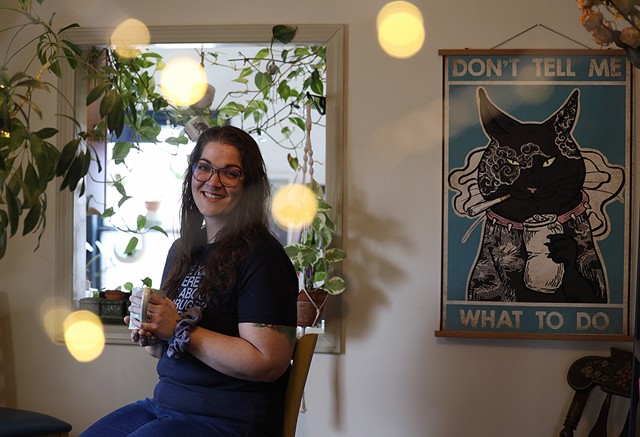 It sounds impossibly cliché that Mary Kruger, the executive director of the Rochester chapter of the National Organization for the Reform of Marijuana Laws, smoked a bowl before she sat for an interview with CITY in her living room one recent morning.

But she did, and she said she does every day. “It’s like drinking coffee,” she explained.

Her long brown hair was still damp from a shower and she sat on a dark blue sofa in a room teeming with houseplants and strings of tiny white lights. On the coffee table sat a bong, an ashtray, a bottle of cannabis-infused hand lotion, and books about social justice and Buddhism. The room smelled of sandalwood from the nag champa incense she had burning.

“I can have it affect me more than coffee if I want to,” she went on. “And there is a level of, ‘Oh, I smoked too much. Now I can’t do the thing I needed to do for another half hour.’”

Kruger, 30, who lives in a tidy purple house in the South Wedge, hadn’t reached that level that morning, and said she doesn’t on most days. Walking that line is how she has managed to emerge as a leading voice in Rochester for the crusade to legalize the recreational use of cannabis in New York.

Over the last two years, her name has become synonymous with local efforts to push for cannabis legalization. From her perch at ROC NORML, she has organized monthly public forums, led lobby days in Albany, gotten the ear of legislators, orchestrated a partnership with the Rochester Razorsharks minor league basketball team, and cultivated sponsors and goodwill. A typical ROC NORML monthly meeting draws anywhere from 10 to 50 people.

That morning she was focused and rattling off the pillars of what she said must be the driving force behind legalization: social equity. That is, a commitment to fighting social and economic inequality by leveling the playing field in communities of color that have been disproportionately negatively affected by marijuana laws.

What that looks like to Kruger is the expunging of criminal records for people convicted on marijuana charges; ensuring equal access to business loans and licensing opportunities for retail cannabis sales; the creation of incubator programs; and reinvestment in neighborhoods hardest hit by the drug war.

Supporters note that Black people are almost four times more likely to have been arrested for marijuana possession than white people, even though rates of use are similar.

“There are billions of dollars to be made in this new industry,” Kruger said. “How can the state responsibly use marijuana legalization as a way to build communities up? Because the state has been responsible for having used marijuana prohibition to break communities down.”

The message on the T-shirt she wore reinforced her stance: “Did we know we were lying about the drugs? Of course we did.” The quote is attributed to former President Richard Nixon advisor John Ehrlichman, who has said the Nixon administration’s war on drugs was nothing more than a political vendetta against Black people and the anti-Vietnam War left.

State legislators who support legalization largely embrace that take and are positioning themselves to address it.

Their bill, the Marijuana Regulation and Taxation Act, goes much further toward meeting the social equity goals of advocates than a dueling measure from Gov. Andrew Cuomo called the Cannabis Regulation and Tax Act. The two sides spent the better part of the last month debating a middle ground, with legislators getting the upper hand.

He recalled Kruger reaching out to him when he was a candidate for what would be an unsuccessful run for office in 2018. They met for coffee. He attended ROC NORML meetings. She galvanized her members to support his campaign — then and on his winning run last year.

Over time, Cooney said, he came to understand the issues and saw how Rochester could benefit from the commitment Kruger was talking up.

“She educated me, quite frankly,” Cooney said. “I would say that her organization is the most organized local effort for legalization in Rochester.”

“She knows her stuff,” he added. “There’s no doubt about it.”

Kruger founded ROC NORML in 2018 upon returning from teaching abroad in southeast Asia and a year in Oregon, where recreational use of marijuana was legal.

The group is an offshoot of the National Organization for the Reform of Marijuana Laws that was founded in 1970 and has played a central role in the decriminalization of cannabis. The organization has more than 50 chapters in the United States, including four in New York.

She said no state where marijuana is legal has managed to meet the social equity demands of advocates, and that she saw launching a local chapter of NORML as a way to help shape cannabis policy as New York flirted with legalization.

To that end, Mayor Lovely Warren has proposed investing tax revenues from legal marijuana in a housing trust fund that would, among other things, assist low-income people with start-up funding to buy a home.

Zach Sarkis, the founder of NY HempLab, a Rochester-based hemp industry incubator, said few marijuana legalization advocacy groups have done more than ROC NORML to get people in power on board with the agenda.

“Literally, ROC NORML has gone into offices where people are anti-cannabis and showed up with books of data and facts and changed a lot of perspectives,” Sarkis said.

“If it wasn’t for people like Mary, this shit wouldn’t be happening,” he went on. “People think this stuff just happens. It happens because people like Mary Kruger show up.”

Kruger recalled trying pot for the first time when she was 15. She said it was in the garage of her family home in Irondequoit with a friend after an Earth Science final exam.

“We made something out of a plastic water bottle,” Kruger said. “It was a few months after that that I started consuming every day.”

She said she wished she had gotten a formal education on cannabis in school, like what health classes offer in the way of alcohol consumption, where teachers talk about things like standard drink sizes, how alcohol affects the brain and body, and media influences.

Instead, she said, any reference to pot in a classroom setting was shrouded in gloom and doom. “‘Reefer Madness’ has lasting effects into today,” Kruger said.
She said she learned about marijuana the hard way — through experimentation and wading through the vast morass of literature on the subject and pocketing truths when she found them.

In the meantime, Kruger attended SUNY Brockport, where she earned a bachelor’s degree in sociology with a minor in race studies. Today, she puts her degree to work at a software company that specializes in helping crisis lines and nonprofits match clients with services.

“If I’m going to consume cannabis every day, I gotta get my shit done,” Kruger said. “I can’t be the stereotype.”

David Andreatta is CITY's editor and can be reached at dandreatta@rochester-citynews.com.