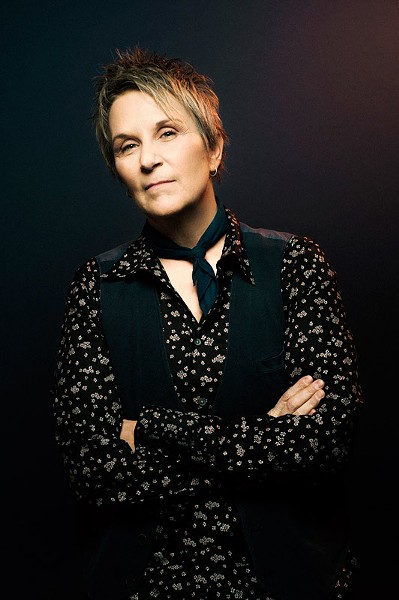 Mary Gauthier says the Songwriting with Soldiers program is therapeutic, but it isn't therapy.

Every track on Mary Gauthier's new album, "Rifles & Rosary Beads," is a gut-punch. The album is rife with the sound of genuine heartache. And while this singer-songwriter has an amazing grasp of the darkness that we are all susceptible to and the inevitable yet elusive light on the other side, she didn't cut this platter alone. "Rifles & Rosary Beads" is a collection of songs written in collaboration with military veterans, giving them a voice to be heard above the rhetoric and lip service.

Gauthier has led a storied life herself: As a teenage runaway, she abused drugs and alcohol and tangled with authority — she spent her 18th birthday in jail. She also ran a popular Cajun restaurant in Boston. It's strange, but Gauthier, now a prolific songwriter at 56, didn't write her first song until she was 35. She has released 10 albums since then and is on everybody's hit list for the dark redemption that she weaves throughout her music.

Her presence is arresting and magnetic, reflective of a fully realized life. Just grab a listen to anything from Gauthier's discography and you'll hear both sides of life: how she sees it and how it really is.

Gauthier took a moment out of her day to answer some questions. She was charming and direct; she has a beautiful soul. An edited transcript follows.

Mary Gauthier: I have no idea. But it's a damn good question.

Tell us a bit about Songwriting With Soldiers.

Over the last four years, I've been writing songs with members of the military and their families through the Songwriting With Soldiers program, a non-profit organization that pairs veterans with professional songwriters. Veterans' songs inevitably end up as prayers for peace. No one hates war more than a soldier. The experience is transformative for both the songwriter and the veteran, and this work saves lives. The process is deeply therapeutic, but it's not therapy. It is the making of art. I decided about a year ago that I wanted these songs to go out into the world so more people could hear them.

The current political climate, the divisiveness, makes the songs all the more important, because I believe these songs help civilians get to know what some of our soldiers are feeling today.

How has it impacted you as a songwriter?

It has changed me. The brave women and men I have met and worked with have taught me the deeper meaning of service, sacrifice, and love.

What's your favorite song on the new album and why?

Each one of these songs is a person to me — my co-writers are all veterans who I have grown very fond of. I could never pick a favorite. Each has their own story, and every one of their stories matter.

I read somewhere that your "Mercy Now" is considered by some to be the saddest country song ever. How do you feel about that?

Rolling Stone said that. But "Mercy Now" is not a sad song. Also, it's not a country song. So I guess that's how I feel about it.

Woody Guthrie's guitar killed fascists. What does yours kill?

How does your new album stand with your other releases?

It's the most collaborative record I have ever been a part of, and I am very proud of it. Time will tell how it ranks. If people are still listening to these songs in 50 years, then they will have stood the test of time.

What are you most proud of?

I am proud that I've been able to keep this music thing going for 10 records and 20 years, and stay clean and sober in the process.